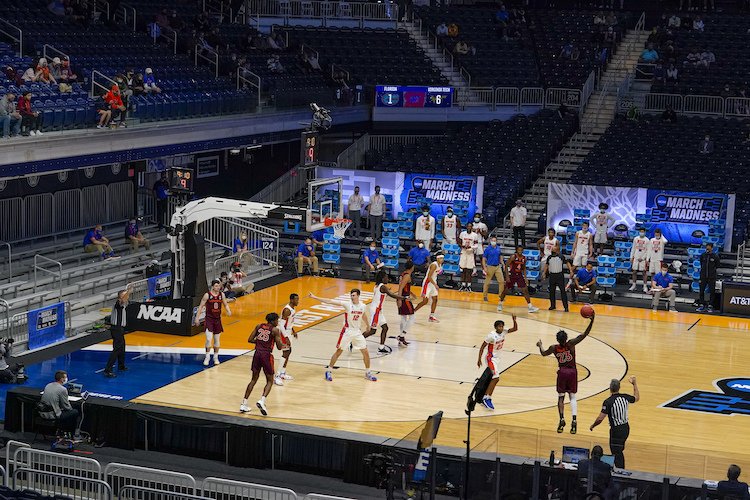 Florida plays against Virginia Tech in the first half of a first round game in the NCAA men's college basketball tournament at Hinkle Fieldhouse in Indianapolis on March 19. Photo by Michael Conroy/The Associated Press.

Just days before the March Madness tournament crowns a champion, the U.S. Supreme Court will hear arguments in a high-stakes battle between the National Collegiate Athletic Association and a legal class of student-athletes from the top revenue-producing sports of football and men’s and women’s basketball.

On one level, NCAA v. Alston is a thorny case about which level of antitrust scrutiny to apply to some rather arcane and ever-shifting rules on scholarships and other forms of education aid that colleges may provide to student-athletes.

On another level, it is potentially consequential to a larger debate that has reverberated from campuses to courtrooms to Congress in recent years about the definition of amateurism in intercollegiate sports and whether athletes deserve more compensation.

“It is a very significant case,” says Matthew Mitten, a law professor at Marquette University and the executive director of the school’s National Sports Law Institute. “What’s really at stake is whether the NCAA is going to continue to be given ample latitude to preserve the amateur nature of college sports and distinguish it from pro sports.”

The NCAA says in a brief that “the lower courts erroneously redefined amateurism” in the case. The Indianapolis-based governing body for the highest levels of intercollegiate sports, along with 11 top athletic conferences, are asking the high court to overturn lower court rulings that found antitrust violations in the NCAA’s rules with regard to certain restrictions on education-related compensation of student-athletes.

“For 12 years and running, a single district judge has entertained successive challenges to the NCAA’s amateurism rules, which define college sports as a unique product,” the NCAA says, adding that a federal appeals court has “blessed judicial superintendence of a defining aspect of college sports.”

“Many things are wrong with that picture,” says the NCAA brief led by Seth P. Waxman of WilmerHale, a former U.S. solicitor general under President Bill Clinton.

The student athletes who challenged the compensation rules, in turn, argue that the NCAA and the conferences are seeking “nothing less than an outright exemption” from federal antitrust law.

“What’s at stake here is whether NCAA Division I basketball and [Football Bowl Subdivision] football are subject to the same antitrust rules as anybody else,” says Jeffrey L. Kessler of Winston & Strawn, the lead lawyer for the students. “Our position is if the NCAA wants some form of special immunity from the antitrust laws, only Congress can give it and not the courts.” 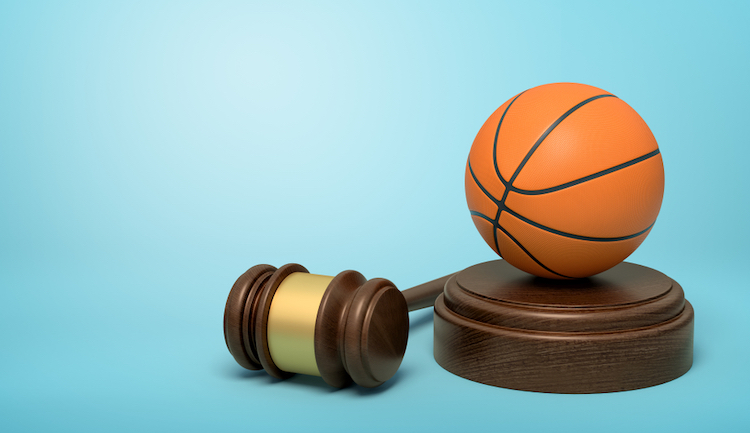 A ‘single district judge’ in Oakland

To understand what is at issue in the Alston case, it may be best to start with a precursor lawsuit that went before the same “single district judge” in 2014—U.S. Senior District Judge Claudia A. Wilken of Oakland, California.

In O’Bannon v. NCAA, a class of student athletes challenged the athletic governing body’s rules that barred them from being paid for their names, images and likenesses. Wilken declared several of the NCAA’s rules unlawful, including one that capped athletic scholarships at tuition and fees and meant student-athletes were not being compensated for the full “cost of attendance” at their campuses. Wilken also required the NCAA to allow colleges to pay athletes $5,000 above the cost of attendance and unrelated to any educational expenses.

The San Francisco-based U.S. Court of Appeals for the 9th Circuit, in the O’Bannon case, held that all NCAA rules are subject to trial and what is known in antitrust law as “rule of reason” scrutiny, a three-step test designed to help courts resolve whether a restriction unreasonably restrains trade.

The 9th Circuit rejected the NCAA’s arguments that a 1984 Supreme Court decision, in NCAA v. Board of Regents of the University of Oklahoma, had categorically upheld the governing body’s amateurism rules as consistent with the federal Sherman Act.

The appellate court upheld Wilken’s ruling in O’Bannon, except for the $5,000 payments, which the court said would “vitiate” athletes’ amateur status. (Meanwhile, the debate over athletes being able to get paid for their names, images, and likenesses remains unresolved. The NCAA is moving toward adopting rules that would allow such compensation, but that effort was paused in January. The NIL issue is not before the Supreme Court in the Alston case.)

An injunction that includes $6,000 payments

While O’Bannon was pending, other student-athletes sued the NCAA, and Wilken took up a combined class action led by Shawne Alston, a former running back at the University of West Virginia, and Justine Hartman, a former basketball player at the University of California at Berkeley. Among other remedies, the lawsuit sought to do away altogether with the NCAA’s prohibition of unlimited cash payments to athletes.

Alston testified during a 10-day trial in the case that while he was receiving an athletic scholarship worth $25,000 to $28,000 per year, but he usually didn’t have money for food, his cellphone bill or for social activities. He borrowed money or begged family members for cash to cover ancillary expenses.

Hartman testified that she barely scraped by on her scholarship aid. She and her teammates received Beats headphones and an iPad when their team reached the Final Four of the women’s tournament, she said, but in general, playing basketball felt like a job.

In 2017, the NCAA and the conferences reached a $208.7 million settlement covering part of the suit, resulting in payments of $5,000 to $7,000 each to some 40,000 football and basketball players who had played within a defined period.

But the Alston case continued over possible injunctive relief over the NCAA’s rules. Judge Wilken applied the rule of reason antitrust analysis and held that student-athletes could not be paid unlimited amounts unrelated to education. But she held that the challenged NCAA rules were more restrictive than necessary in that they limited or barred certain noncash educational benefits and were a restraint of trade that violated the Sherman Act.

Wilken entered a permanent injunction that said the NCAA could not bar colleges from offering nearly $6,000 in annual cash payments to student-athletes who maintain their eligibility, unlimited cash payments for post-eligibility internships and certain education benefits such as study abroad.

The 9th Circuit upheld the antitrust ruling and injunction, and it rejected a cross-appeal from the student athletes who sought to bring about their suit’s original goal of eliminating all limits on compensation.

“In our view, the district court struck the right balance in crafting a remedy that both prevents anticompetitive harm to student-athletes while serving the procompetitive purpose of preserving the popularity of college sports,” the 9th circuit said. 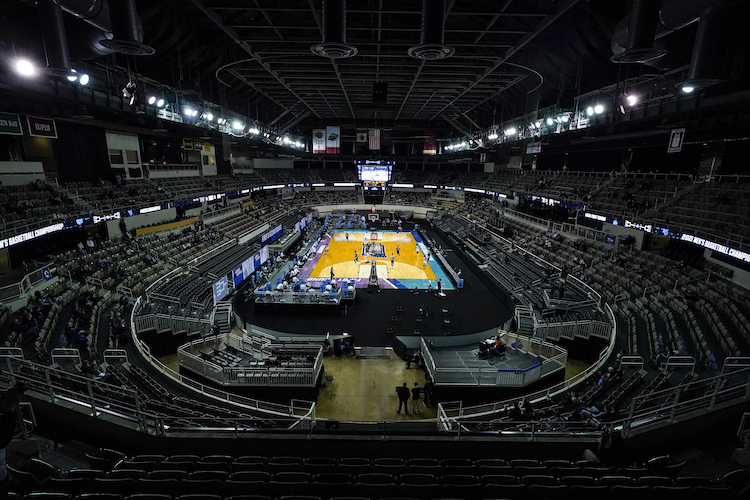 Villanova plays Winthrop in the second half of a first round game in the NCAA men’s college basketball tournament at Farmers Coliseum in Indianapolis on March 19. Photo by Michael Conroy/The Associated Press.

Concerns about a ‘race to the bottom’

Many of the parties’ arguments revolve around the level of antitrust scrutiny they believe was proper.

“The eligibility rules challenged here define the character of NCAA athletics, and therefore should be upheld based on abbreviated deferential analysis,” the NCAA says in a brief.

That deferential antitrust review, sometimes called a “quick look” with no trial, is “further war- ranted because the NCAA is not primarily a commercial venture” but an association whose core mission is to facilitate educational opportunities, the NCAA brief says. The NCAA insists that it is not seeking antitrust liability.

The athletic conferences, in a brief, say that colleges will “race to the bottom” if the roughly $6,000 academic achievement awards become effective, and thus “the district court’s injunction threatens to make pay-to-play ubiquitous in college football and basketball.”

The NCAA and the conferences are supported by more than one set of antitrust law experts, most big higher education associations and a group of student-athletes from nonrevenue sports, such as golf, gymnastics, rowing and volleyball—who fear the effects of the injunction.

“The NCAA’s biggest risk here is it doesn’t see an end to litigation” if the Supreme Court rules against it, says Jodi S. Balsam, an associate professor at Brooklyn Law School and sports law expert who signed an amicus brief in support of the NCAA on several antitrust arguments. “There is the potential for the athletes and their lawyers to go back to court every time the NCAA regulatory landscape changes.”

The Alston plaintiffs argue that the district court injunction has been narrowly tailored to remedy the antitrust violations found at trial.

“It frees conferences and schools to compete for student-athletes by offering them enhanced education-related benefits to support their academic achievement,” they say in a brief. And the remedy makes clear that the conferences within the NCAA may set their own, even stricter compensation limits if they choose.

“Because NCAA rules restrain the schools’ ability to compete for [student-athlete] talent by offering better compensation or benefit packages, the schools compete indirectly (and inefficiently) by spending lavishly on seven-figure coaches’ salaries” and palatial athletic facilities,” the student-athletes’ brief says.

The athletes have support from President Joe Biden’s administration, a separate set of antitrust law experts, historians and sports law professors and others

A group of sports economists argue in an amicus brief in support of the athletes that the NCAA is a classic cartel that “reduces competition for athletes, while benefitting NCAA members by fixing the price of college athlete services below a competitively determined level.”

Rodney Fort, a professor of sport management at the University of Michigan who spearheaded the sports economists’ brief, says that a ruling for the NCAA would effectively grant the organization at least a partial exemption from antitrust law and could “set the athletes back 25 years.”

“But if the court rules for the athletes down the line,” he says, “that keeps the movement lively and opens the door to the next step.”

The case is set for argument March 31.