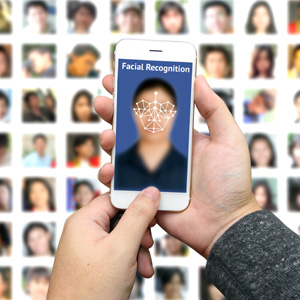 When Taylor Swift performed at the Rose Bowl in May 2018, concertgoers may have seen a kiosk that showed exclusive video clips of her performing and rehearsing. If they paused for more than a moment to watch those clips, then the kiosk definitely saw them.

In December, Rolling Stone reported that the kiosk contained facial recognition software designed to capture images of concertgoers and run them against a database of known Swift stalkers.

The Swift concert will probably not be a one-off. Concertgoers can expect to have their faces scanned surreptitiously more often—and not necessarily because the artist they’re going to see has had a problem with stalkers. Blink Identity, an Austin, Texas-based company, announced in 2018 that it had gained Ticketmaster and its corporate parent Live Nation as investment partners.

“We are in the planning stage for tests in venues in the first part of this year,” Blink Identity co-founder Mary Haskett told the ABA Journal. She notes that Blink Identity is striving to “create a way for people to use their identity in a way that makes their lives more convenient. It’s like a Disney FastPass for venues and other public spaces.”

She adds that Blink Identity hopes its technology, which is in beta testing, can assist companies such as Ticketmaster with “ticketing or point-of-sale systems to reduce fraud, scalpers and make the overall experience more pleasant.”

The use of facial recognition scanning, already a given in law enforcement, is spreading deeply into the U.S. private sector.

Business-to-business research firms predict the facial recognition industry will grow. According to Research and Markets, the global facial recognition market was $3.85 billion in 2017 and is projected to more than double by 2023, hitting $9.78 billion. MarketsandMarkets had different numbers, but displayed a similar growth, reporting a global market of $4.05 billion in 2017 and predicting $7.76 billion by 2022.

FRS is a technology that can identify a person from a digital image or video frame from a video source. And increasingly, airports, stores, banks, casinos, workplaces and myriad other places are using it to help them improve safety and combat fraud.

In November, Tokyo-based NEC Corp. announced it would begin working on adding facial recognition capabilities to the customs inspection areas at Tokyo Narita International Airport. NEC said in a press release that it anticipated demonstrations of the new electronic customs procedure gate beginning in April. According to the company, NEC has biometric identification systems in place, including facial recognition, at approximately 50 airports around the world.

Today, Cognitec’s technology is enabling airlines and airports to create a paperless system, whereby travelers will be able to move through various checkpoints at airports without producing any paper, company marketing manager Elke Oberg told the ABA Journal. Cognitec’s FRS technology is able to see people as they walk past various checkpoints and compare their faces to its database of known offenders, shoplifters and people with other problems and try to detect them.

In the retail sector, merchants are using facial recognition scanning to not only clamp down on shoplifting and employee fraud but as a tool to better understand the buying habits of customers and meet their needs, according to industry pundits.

California-based FaceFirst Inc.’s facial recognition technology, which is designed to scan faces up to 50 to 100 feet away, has established a foothold in the retail industry. CEO Peter Trepp told BuzzFeed News that his technology has cut theft in some retail customers’ stores by as much as 30 percent, adding that his company is currently working with hundreds of retailers and hopes to soon work with thousands.

Cognitec’s Oberg says her company “had hoped retailers would be a market. But they are very reluctant to install and use this technology. They feel once customers know about [FRS] being used, it might deter them from coming there.”

FEARS FOR THE FUTURE

Despite its growing use, questions remain about the accuracy of facial recognition scanning.

Amazon’s Rekognition has been highly controversial ever since its release in late 2017. Purporting to track people in real time in streaming video of crowds and public places, users include people-search database Spokeo, which offers FRS among an assortment of database tools to help clients. The Washington County Sheriff’s Office in Oregon is also a client, and Amazon has admitted to marketing the tool to Immigration and Customs Enforcement.

In November, Amazon released updates that it said in a press release “can now detect 40 percent more faces—that would have been previously missed—in images that have some of the most challenging conditions described earlier. At the same time, the rate of false detections is reduced by 50 percent. ”

Despite advances in improving its accuracy, the technology is prone to errors, privacy groups maintain. For example, a 2018 study called “Gender Shades: Intersectional Accuracy Disparities in Commercial Gender Classification” found a 34 percent error rate with FRS in identifying darker-skinned women. In January 2019, MIT Media Lab published a study of Rekognition that was consistent with that study, finding an error rate of more than 31 percent when identifying darker-toned women.

The American Civil Liberties Union, meanwhile, has sounded the alarm over Amazon’s product. “Rekognition marketing materials read like a user manual for authoritarian surveillance,” Nicole Ozer, Technology and Civil Liberties Director for the ACLU of California said in a statement in May. “Once a dangerous surveillance system like this is turned against the public, the harm can’t be undone.”

Amazon, for its part, defended Rekognition, telling the ABA Journal its product “has many useful applications in the real world.” For example, various agencies have used Rekognition to find abducted people and lost children and even identify guests for the royal wedding of Prince Harry and Meghan Markle.

Haskett of Blink Identity has acknowledged the public fears over facial recognition scanning.

“We are very aware of how this technology can be abused and part of our motivation for forming Blink Identity was to deploy the technology in a privacy preserving way in the hopes that we would set a precedent and others would follow our lead,” Haskett says. “Our system is opt-in and voluntary.”

Scott Carlson is veteran journalist and freelancer writer from the Twin Cities.