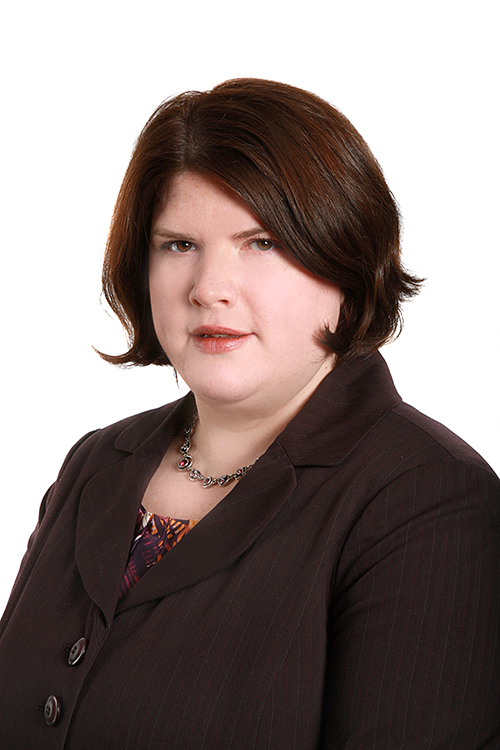 Annaliese Fleming: "It's been very gratifying to see the ABA has proven to itself that we can work remotely and effectively in ways that we may not have envisioned before the pandemic."

That lawyer is Annaliese Fleming, someone many staff and members already knew and worked with closely since she joined the ABA in 2015. As its deputy general counsel, she assisted James Dimos, the association’s former deputy executive director and general counsel, who died in early August. Fleming had been responsible for supporting the Standing Committee on Amicus Curiae Briefs, managing intellectual property issues and advising on litigation matters.

A 1999 graduate of Northwestern University Pritzker School of Law, Fleming brought to the ABA experience she earned from more than a decade as partner in the Chicago office of Barack Ferrazzano Kirschbaum & Nagelberg, where she focused on IP and commercial litigation. She also brought a different perspective gained from her two years as an assistant professor of doctoral leadership studies at Cardinal Stritch University in Milwaukee.

Fleming spoke recently with the ABA Journal about her life and career before the ABA, moving into her new role during the COVID-19 pandemic, and her priorities for the association.

Let’s start from the very beginning. Where did you grow up and what inspired you to become a lawyer?

I grew up in a very, very small town in northern Wisconsin. I was born in Milwaukee and most of my family is from the Milwaukee area, but my parents were hippies who went back to the land in the early ’70s. They bought 160 acres in northern Wisconsin in 1970, and I grew up outside of a very small town called Jump River. In its heyday, Jump River had maybe 100 people. It had one gas station and one small general grocery store, I think three bars and three churches.

I would say my interest probably arose in high school. I have always been interested in writing and language arts and English classes and history classes. I did a mock trial activity, where you were part of the team that prepared a case for trial and went to the courthouse in downtown Milwaukee and put it on for an actual judge. I remember a bunch of my family coming and watching me—one of whom was an uncle who was a criminal defense lawyer. I made an objection that was overruled and afterward he comforted me a little and said, ‘Don’t worry, that judge always overrules my objections.’ It’s a nice memory that sticks with me to this day.

You spent a significant part of your career in private practice. What was that like for you and what did you learn there?

Overall, it was really an excellent experience. My background is in commercial litigation and intellectual property. I really do credit the colleagues that I worked with in private practice for helping me develop my skill set in those areas. But more than that, really helping me to develop the critical thinking and judgment that are important in the law and when it comes to solving crises or problems. I really learned how to think about them, how to approach them, how to remain calm. Being unflappable is one of the critical aspects of approaching any difficult situation or problem that needs to be solved. And so, I really learned how to be an effective advocate.

Right before you came to the ABA, you were teaching. How did you make that transition?

I took a break from the law to take advantage of a specific opportunity that arose for me. I had always been interested in the idea of teaching. It’s very much a part of my family. Both of my parents are teachers. And in fact, one of my brothers is also a professor. I thought it would be interesting to be in the classroom and engage with students, particularly around the topics I was teaching.

It was a doctoral program in leadership studies, designed for practitioners rather than folks who were going to make research their primary career goal. We got a lot of students who were educators looking to take that next step in their careers. I really loved the classroom and discussing leadership concepts and theories with students. Although, what I did realize fairly quickly is that I missed the practice of law. I’m really a lawyer at heart. When I do trainings or even explain legal concepts or requirements to clients, I still very much channel that inner teacher. I think that when clients understand the why of what you’re telling them, it’s far more effective advice rather than just laying down rules or requirements.

Were you already a member of the ABA before you joined its staff?

I was. I have been a member of the ABA since I began practicing law in 1999. I think it is important to do local networking, but I also think it’s important to do national and really global networking within the legal profession. We live in an increasingly global environment in terms of the practice of law and legal profession, and so the ABA really represents the opportunity for that kind of engagement. I have also always found the content to be incredibly valuable, both CLE and the periodicals and publications that the ABA puts out. They tend to be the gold standard in terms of legal treatises.

Why did you decide you wanted to work at the association?

When I interviewed for a position in the department, the work that I was coming to do was supporting the ABA on litigation matters but also staffing the Standing Committee on Amicus Curiae Briefs. The opportunity to do that work was very compelling to me. Working with the standing committee is really a privilege, and it’s a wonderful group of Supreme Court and appellate lawyers from around the country. I leapt at the chance to be able to work on really important issues to the legal profession.

In thinking over your time as deputy general counsel, what were some of the highlights and challenges?

The highlights and challenges are in some ways two sides of the same coin. One of the highlights for me of working at the ABA was, although I came to do a couple of substantive areas, the breadth of the experience. I did do the amicus briefs and supported litigation and then eventually I started doing some of the intellectual work. But I ended up meeting people from the governance and policy side; from the sections, divisions and forums; marketing and membership; digital engagement; legal ed; governmental affairs. I ended up being able to assist and advise so many different aspects of the organization. That has been a highlight, and in some respects, it has also been the challenge. This is an organization with so many different entities within it focusing on different areas of the law. Getting my arms around the organization as a whole was more of a challenge.

You became the ABA’s general counsel in October, in the middle of the ongoing pandemic. How has that affected your new role?

I’m certainly cognizant of the fact that it is a unique time with unique challenges. We are seeing a lot of disruptions to how we have done things. That is also providing opportunities for innovation and creativity in how we approach doing our work. It’s been very gratifying to see the ABA has proven to itself that we can work remotely and effectively in ways that we may not have envisioned before the pandemic … It is a challenging time to take on a role like this, but I also see it as an opportunity and privilege to serve the organization at this time. To me, it’s all the more compelling a reason to take on a role like this. When there is great need, that’s when people need to serve.

As we move into 2021, what are your top priorities for the association?

My very top priority is to continue to help the ABA navigate through the pandemic and return to work in a way and at a time that is safe for our employees and our members. That will still be very much a priority and focus for me, I would imagine, for the significant part of the upcoming year.

Once we’re able to return to work and we have survived the pandemic, at that point I will probably turn to some other priorities in the office. Our use of technology is something I want to look at, whether that can be more effective and more efficient. I am also always concerned with making sure we have the right processes in place so we can collaborate as an office effectively.

Other priorities are looking at how the general counsel’s office can support the mission and goals of the organization. Of course, it does that indirectly on a daily basis by supporting the work of the organization, but we are having some conversations about how we can be more intentional in supporting the goals and mission, particularly Goal III.

OK, final questions: What do you like to do in your free time? And what’s one thing most people at the ABA don’t know about you?

In my free time, I love to hike. We take a family vacation in Colorado every summer near Rocky Mountains National Park and spend time hiking. I would love to pick that back up, and perhaps, eventually be able to travel again. In addition to that, I have a 15-year-old daughter and a 12-year-old son, so my hobbies do somewhat center around what they’re willing to do in terms of spending time with me. I watch a lot of football with my 12-year-old. We are avid Green Bay Packers fans, and that’s probably the thing the rest of the association did not know about me. I will disclose, even in Bears territory, I am an avid fan of the Green Bay Packers. Although, I have a mixed marriage; I am married to a Bears fan, so I understand how to be diplomatic about the issue.