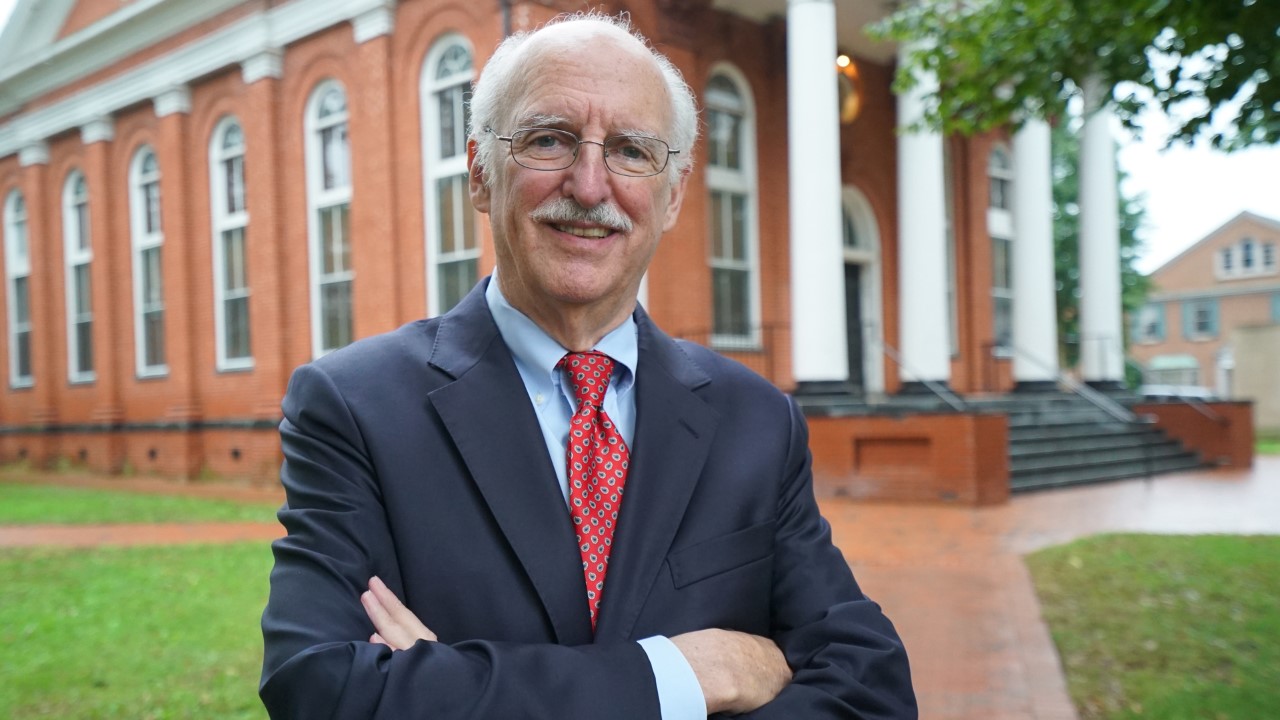 Judge Douglas H. Ginsburg stands in front of the Loudon County Courthouse in Leesburg, Virginia. Ginsburg, who sits on the U.S. Court of Appeals for the District of Columbia Circuit, is host of the PBS series "A More or Less Perfect Union." Photo by Barbara Potter.

Concerned about the lack of civics education in schools, Judge Douglas Ginsburg is the latest jurist looking to teach the public what he believes it’s been missing.

Ginsburg, a U.S. Court of Appeals for the District of Columbia Circuit judge on senior status and a onetime Supreme Court nominee, worked with PBS to create a three-part PBS series on the Constitution titled A More or Less Perfect Union. The series now is streaming online and will air on PBS stations in certain markets over the next seven weeks.

To go along with the series, Ginsburg edited a companion book, Voices of Our Republic, that includes thoughts on the importance of the Constitution from those such as Supreme Court Justice Ruth Bader Ginsburg, historian Ron Chernow and Lynne Jackson, a great-great granddaughter of Dred and Harriet Scott.

Ginsburg is also proud to have helped develop materials that will be used in a related educational curriculum designed to reach more than 1 million students per year. He joined retired Supreme Court Justice Sandra Day O’Connor and fellow jurists in the U.S. Circuit Court of Appeals for the 2nd, 8th and 9th Circuits to create games and learning centers to teach civics.

Ginsburg says he was interested in the PBS project because the alarming lack of civics knowledge by the American public. Only 39% of respondents in a 2019 Annenberg Public Policy Center survey could name all three branches of government. Some 22% of respondents couldn’t name a single branch.

Yet those numbers were an improvement: In 2018, just 32% of respondents named all three branches of government.

Jurists get in on the act

Ginsburg says O’Connor was one of the first high-profile individuals to begin bringing civics to the masses. She did so through iCivics, a nonprofit organization she founded in 2009 that utilizes role-playing games and other digital tools, as well as lesson plans, to bring learning to children.

“She really set an example and drew judges’ attention to the need for this,” Ginsburg says. “I think it’s a reaction to the realization that there’s a real problem here.”

Bob Chitester, founder and executive chairman of the Free to Choose Network, which produced the PBS series, approached Ginsburg about taking part in it. Ginsburg, who says he fell in love with the Constitution during a Cornell University course as an undergraduate, came onboard, though he wasn’t thrilled with the original concept. The project was to have centered around democratic decision-making, ending with the Constitution.

So Ginsburg convened a small group of trusted advisers, including constitutional law scholars Randy Barnett of Georgetown University and F.H. Buckley, Ginsburg’s fellow professor at the Antonin Scalia Law School at George Mason University. They discussed the project, and Ginsburg eventually worked with writers to revise the concept and work on the script.

Promoting a better understanding of civics

In the first episode of the series, Ginsburg examines the struggles and compromises in the creation of the Constitution. The second episode explores the amendments.

The final episode discusses how the Constitution is under pressure today, and how all three governmental branches have contributed to the problem. Ginsburg, who is an originalist in his interpretation of the Constitution, points out how the balance of powers has shifted over the years.

He contends elected officials have degraded the Constitution, and now there are agencies that do the work of all three governmental branches. He also points to how individual liberties have eroded, and that it is difficult for cases to go to trial. He says even if someone is innocent, they may take a plea deal, forsaking their civil liberties.

Ginsburg says a more informed public would be keen to elect legislators and judges who adhere to the real meaning of the Constitution, helping take the country back to what the founders envisioned. But, he laments, not enough people have read the Constitution to know what it lays out. That is where his recent work with PBS comes in.

He says the code of conduct for federal judges encourages them to take part in public education, and he is happy to be among those promoting a better understanding of civics. What he and others in the judiciary are doing is not a replacement for a civics education, he says, but it is a help.