What were the best legal novels of 2013? (podcast) 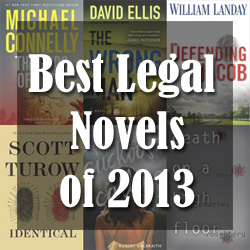 We’ve had a great year here at the Modern Law Library. One highlight was when we had the opportunity to speak to Fred Gray about his civil rights memoir and his time serving as Rosa Parks’ attorney. We also spoke with Radley Balko about the militarization of U.S. police forces. And Jill Norgren told us about some trail-blazing women lawyers from the 19th and 20th centuries.

However, our podcasts this year were all about non-fiction books. So this month, we wanted to give our readers a look at some of the legal novels which either came out in 2013, or were honored with awards in 2013. ABA Journal web producer Lee Rawles spoke with law professor and author Michael Asimow, who chose to bow out of the judges panel of our 2013 Harper Lee Prize for Legal Fiction after his friend Paul Goldstein was selected as a finalist. (Goldstein ended up winning for his novel Havana Requiem.) An avid reader, he shared some of his personal favorites with us.

In addition to our three 2013 Harper Lee Prize finalists, Asimow recommends Michael Connelly’s The Gods of Guilt, Charles Rosenberg’s Death on a High Floor, Lawrence Friedman’s Death of a One-Sided Man and Scott Turow’s Identical. Rawles gets in her own recommendation for The Cuckoo’s Calling, written by J. K. Rowling under the alias Robert Galbraith.

What were your favorite reads this year? Tell us in the comments.

Michael Asimow is a visiting professor at Stanford Law School. At UCLA, he received both the University’s Distinguished Teaching Award and the School of Law’s Rutter Award for Excellence in Teaching. Asimow is co-author with Paul Bergman of Reel Justice: The Courtroom Goes to the Movies (2006), a book about the great courtroom movies of the past and present. He has also written Law and Popular Culture: A Course Book (2013) (with Shannon Mader). Asimow co-authored a course book on administrative law, State and Federal Administrative Law (4th ed., 2013) (with Ron Levin) as well as California Administrative Law (2002) (with Marsha Cohen).