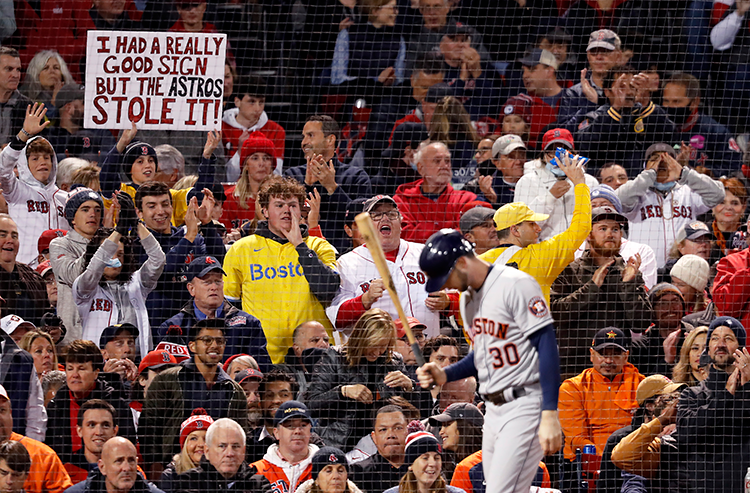 A fan holds up a sign mocking the Astros sign-stealing scandal. The Boston Red Sox hosted the Houston Astros for Game 3 of the ALCS at Fenway Park in Boston on Oct. 18, 2021. Photo by Jim Davis/The Boston Globe via Getty Images.

On Friday night, the Houston Astros will go to bat against the Philadelphia Phillies in Game 1 of baseball’s Fall Classic. For many, this will call back Major League Baseball’s finding in 2020 that the Astros engaged in illegal sign-stealing during the 2017 and 2018 seasons.

Most notably, it occurred during the 2017 World Series, when the Astros beat the Los Angeles Dodgers in seven games (4-3).

Baseball is the national pastime—and litigation is a close second. So just as day follows night games, lawyers were called up by some claiming to have been injured by the Stros’ no-no. Those in pinstripe suits came out swinging.

Three Astros Phanatics filed suit, alleging that the team engaged in fraud and deceptive trade practices by selling season-tickets knowing that it was violating the rules against electronic sign-stealing.

A camera located in the outfield of the team’s stadium captured the hand signals from the catcher that tell the pitcher what type of pitch to throw next. This was viewed by the Astros on a screen outside their dugout and relayed to the batter through the use of noise signals—banging on a trash can. Knowing whether a fastball or curveball or other off-speed pitch was coming gave the batter an advantage.

The ticketholders claimed that they would not have purchased the ducats if they had known about this scheme.

The trial court denied the Astros’ motion to dismiss. The Court of Appeals of Texas, in In re Houston Astros. (2021), corrected the court’s error.

The appeals court agreed with the team that there is no cognizable claim based on how a sports team plays a game. As the court saw it, the plaintiffs’ tickets were nothing more than a revocable license to enter the stadium, sit in their assigned seat and watch the game. And they were not denied these rights. 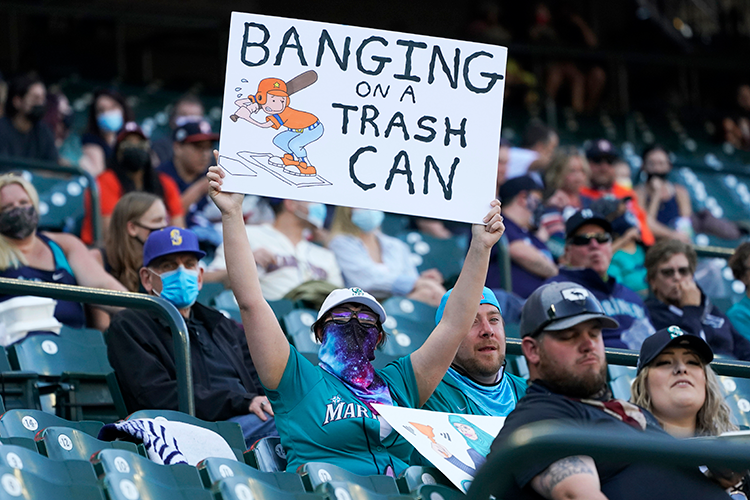 A Seattle Mariners fan holds a sign during the first inning of a baseball game between the Mariners and the Houston Astros on April 17, 2021, in Seattle. The sign was in reference to a sign-stealing scandal involving Astros teams from the 2017 and 2018 seasons. Photo by Ted S. Warren/The Associated Press.

The fans had a different take, characterizing it as off-the-field actions. Specifically, despite having cheated for years, the team falsely portrayed itself as one having integrity. The plaintiffs asserted that “once filled with pride and honor for their team, [they] are grappling with embarrassment, disappointment, shame and disgrace for a team they once believed represented their community, represented them.”

The appeals court was unmoved. Even if the fans suffered such injuries, the claims arose “from the way the Astros played the game.”

While Astros supporters alleged a loss of pride and honor by the team’s antics, gamblers claimed a different type of deprivation.

Anthony Oliver sued the Astros, alleging that he lost a $7,500 bet that the Dodgers would beat the team in the 2017 World Series. Oliver also alleged that sign-stealing by the Boston Red Sox in 2018 cost him another six grand when he bet on the Dodgers to best the Sox in the World Series.

The Nevada District Court, in Oliver v. Astros (2020), dismissed the bettor’s RICO claim: “The Astros and Red Sox could have won the World Series for any number of reasons unconnected to the asserted pattern of fraud. The fact that a team may engage in the fraudulent use of technology to steal hand signals does not guarantee that the signal-stealing team will win. Oliver could have lost his bets for many reasons.”

Oliver was no more successful on his alternative claim. Since he didn’t lose his money to the Astros or Red Sox but rather to a Las Vegas casino and sports betting app, the court concluded that the teams were not unjustly enriched.

In Olson v. Major League Baseball, more aggrieved gamblers stepped up to the plate to take a swing at the Astros and others. This time, it was individuals who participated in fantasy baseball contests hosted by DraftKings. Since sign-stealing led to improved batting performance, the plaintiffs argued that they were deceived into believing that the fantasy baseball competitions were “a game of skill based on fair and legitimate player performance statistics.”

Their first whiff was before Judge Jed Rakoff, who sits on the bench in the Southern District of New York. Rakoff, after observing that a “sport that celebrates ‘stealing,’ even if only of a base, may not provide the perfect encouragement to scrupulous play,” threw the case out.

Earlier this year, the 2nd U.S. Circuit Court of Appeals affirmed. Among other reasons, the appeals court aligned its decision with the many that have rejected claims by attendees at sporting events who were disappointed with the play because of cheating or some other deficiency in the competition.

The tribunal also offered a more sobering rationale for its decision: “Over the years, baseball has had to address many forms of cheating—such as spit balls, steroids, cork bats, and the list goes on and on—that are part of not only baseball, but every sport. … [It]is highly implausible that fantasy baseball participants could reasonably rely upon a purported lack of electronic sign-stealing in participating in the DraftKings’ contest, when nonelectronic sign-stealing is not even prohibited by MLB rules.”

As is often the case when things go awry, it takes judges to do some cleanup.

Randy Maniloff is an attorney at White and Williams in Philadelphia, where he shares his office with several Philadelphia Phillies bobbleheads, and an adjunct professor at the Temple University Beasley School of Law. He runs the website CoverageOpinions.info.