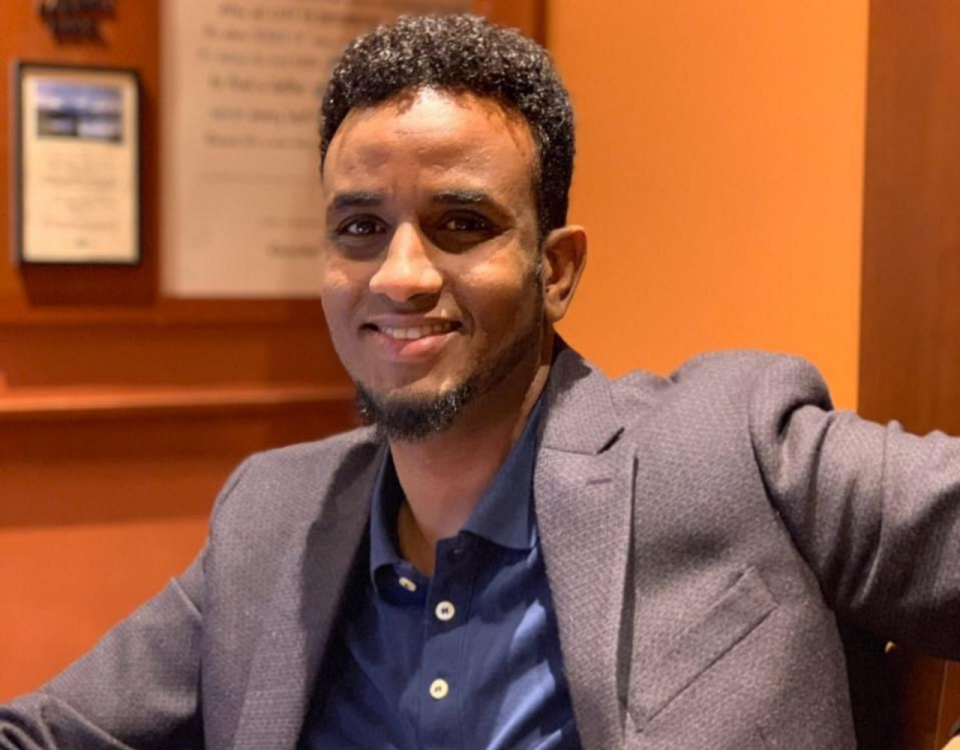 In honor of World Refugee Day and National Immigrant Heritage Month, the ABA Commission on Immigration offered this inspiring essay from Abdullahi Abdigaani, a former ProBAR client. For the last 16 years, Abdullahi has pursued the American dream by working day and night to support his family and achieve academic excellence. When I approached Abdullahi for this article, I asked him to write about “what America means to you and how coming to this country has impacted your life.” The essay below is his truth. It highlights the importance of pro-bono service and the tremendous impact that attorneys and law students can have on the life of an immigrant or asylum-seeker. It was impactful to read that while engaging with Abdullahi in detention, he felt “heard for the first time in my life, trusted for the first time in my life, and reassured that my rights as a human being would be respected for the first time in my life.” Lawyers cannot always secure a win, like in Abdullahi’s case, but they can always treat those we serve with dignity and respect. I look forward to following Abdullahi’s life and career and take pride in knowing that ProBAR was there when he needed us the most. —Meredith Linsky, Director, ABA Commission on Immigration

Sixteen years ago, I came to America with nothing but hope and aspiration for a peaceful and prosperous life. Today, I am a dean at Minnesota West Community College (a two-year community and technical college), a part-time adjunct professor at the University of South Dakota, and a third-year doctoral student pursuing a PhD in international development at the University of Southern Mississippi.

As former President Barack Obama once said, my story is possible only in America.

I came to the United States in the spring of 2006 at the age of 23, seeking asylum as a refugee from Somalia. As I was booked into the Port Isabel immigration detention center in Los Fresnos, Texas, I was overwhelmed with the prospect of a lengthy and complex immigration process, all under the shadow of deportation to war-torn Somalia. I was afraid, alone and uncertain about the future in a country and among people I barely knew, until Meredith Linsky paid me a visit a few days into my detention.

Meredith was the head of the South Texas Pro Bono Asylum Representation Project, or ProBAR, and had worked with refugees from all over the world to seek asylum and other protections in the United States. In our first meeting, Meredith said that she had heard my story, knew about the situation in Somalia and was there to help. I did not understand why Meredith was willing to help a stranger she had just met, but I was extremely grateful for her trust, kindness and humanity.

As I patiently waited for weeks, Meredith paid me a visit again with the good news that Karen Grisez, an experienced attorney with the Fried, Frank, Harris, Shriver & Jacobson law firm in Washington, D.C., was willing to take my case free of charge. I was overwhelmed with emotions and happiness and celebrated with Meredith even before I set a foot in the courtroom.

Karen and her team (Josh and Jacquelyn) arrived soon after and began working on my case, day after day, for what felt like an eternity. As the court day arrived and I took the stand to defend my asylum case, I was neither afraid nor alone but still uncertain about the outcome. Right before the proceedings began, I pulled aside Josh and Jacquelyn—who were both about the same age as myself and soon to become attorneys—and told them regardless of the outcome, I was forever grateful to them; and to me, they were family. As I took the stand, Meredith and Karen sat right behind Josh, Jacquelyn and myself and continued providing me with the moral support I needed most.

Following a rigorous and lengthy court proceeding that took hours of testifying and cross-examination, the overseeing U.S. immigration judge, Howard Achtsam, granted my application for asylum in the United States and withholding of removal to Somalia. Overwhelmed with emotions, Josh, Jacquelyn and I embraced in what felt like the end of a long, difficult, and at times dangerous, journey. Kate Demarest, then a law student and now a practicing attorney in Alaska, hugged me, and said something I will never forget: “Welcome home.” By God, she was right. America was going to be my home.

As Karen and her team found their way back to Washington, D.C., and Meredith and Kate headed back to the detention center, I left Harlingen and headed north toward Minneapolis with a mandate to be free at last and pursue the American dream. A dream that had me work in a warehouse for seven days a week and 14 hours a day in my first year of residence in the United States; a dream that had me enroll in a community college while I was working full time and earn a two-year associate degree, then, pursue and earn a bachelor of science, a master’s degree in public health and pursue a PhD; but, most importantly, a dream that made me the man I always wanted to be: a husband and a father to three beautiful girls and a boy.

However, such a dream is never feasible without the people like Meredith, Karen, Kate, Josh and Jacquelyn, who are willing to go out of their way to listen, trust and take a chance on a stranger like myself, and give someone a second chance after being rejected and hurt and betrayed by the only people and the world they knew.

I am forever indebted for the love, kindness and compassion they’ve shown me in the most vulnerable moment of my life. To me, they are family.

My goal in the near future is to be in a position of power where I can champion liberty, democracy and human rights around the world.

A version of this article first appeared on the Generating Justice Blog on June 23.

Abdullahi Abdigaani is a former ProBAR client. For the last 16 years, Abdullahi has pursued the American dream by working day and night to support his family and achieve academic excellence.