'Bad People Like Him': An interview with master negotiator and former governor Bill Richardson 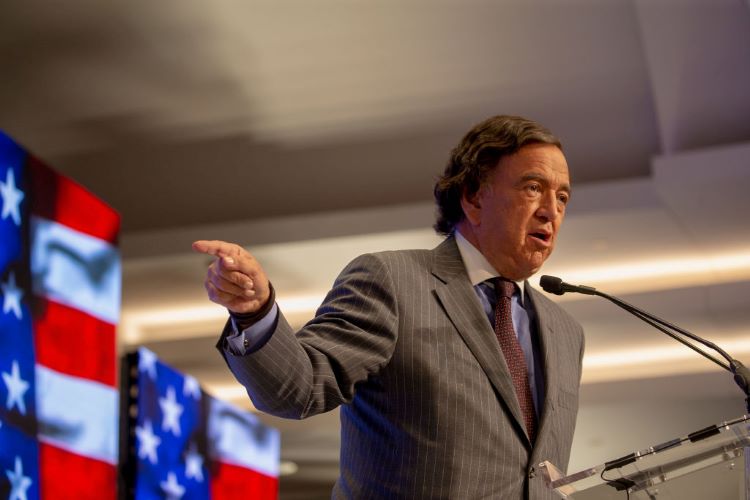 Former New Mexico Gov. Bill Richardson speaks at the Conference on Iran on May 5, 2018 in Washington, D.C. Photo by Tasos Katopodis/Getty Images.

On Dec. 13, 1996, President Bill Clinton, in a White House ceremony, announced the nomination of Bill Richardson as U.S. ambassador to the United Nations. Just a few days earlier, the congressman from New Mexico had been using his diplomacy skills in a much less stately setting.

Richardson was in a remote part of southern Sudan in a chieftain’s hut eating barbecued goat. He was there to convince Kerubino Kuanyin Bol, a rebel leader opposed to the Sudanese government, to free three Red Cross workers he was holding captive.

Richardson has long traveled to far-flung places to negotiate the release of Americans being held by dictators and despots. While in the Clinton administration, he was referred to as “undersecretary of thugs.”

Recently, the former two-term governor of New Mexico has acknowledged an unspecified involvement in efforts to secure the release of WNBA star Brittney Griner and former U.S. Marine Paul Whelan, both imprisoned in Russia. The U.S. government has declared the pair “wrongfully detained.”

For many lawyers, negotiation plays an outsized role in their practices. While Richardson is not bargaining over nuances in a corporate transaction or which driver had the red light, lawyers can still learn about deal-making from the man who has gone back and forth with a who’s who of tyrants, including Saddam Hussein, Fidel Castro, Hugo Chávez and two generations of Kims in North Korea.

In a recent phone interview, Richardson, 74, shared some pages from his playbook. He offers a much fuller version in How to Sweet-talk a Shark. In this 2013 title, Richardson provides a world of lessons for lawyers in a behind-the-scenes look at some of his successful and failed negotiations. 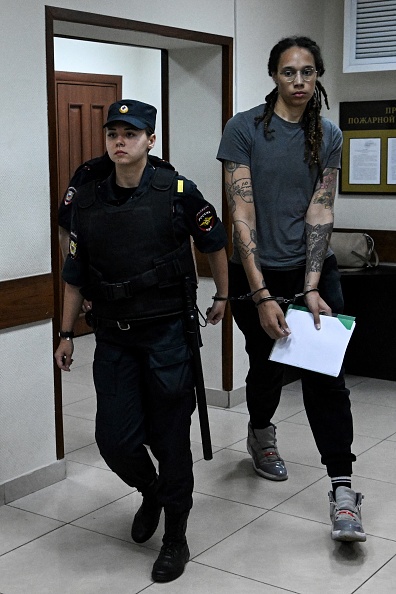 U.S. Women’s National Basketball Association basketball player Brittney Griner, who was detained at Moscow’s Sheremetyevo airport and later charged with illegal possession of cannabis, leaves the courtroom after the court’s verdict in Khimki outside Moscow on Aug. 4. A Russian court found Griner guilty of smuggling and storing narcotics after prosecutors requested a sentence of nine and a half years in jail for the athlete. Photo by Kirill Kudryavtsev/AFP via Getty Images.

“President Clinton,” Richardson tells me, “once was asked at a press conference, ‘Why do you send Richardson to all these dictators,’ and he replied, ‘Bad people like him.’”

Clinton was serious. Richardson gives credit for his success to a willingness of despots to work with him. Despite Chávez’s strong anti-Americanism, the former Venezuelan president once told Richardson he “was the only American politician [he] could truly deal with.”

“I try to come prepared,” Richardson tells me. “You do your homework, you know your enemy’s desires, you know their sensitivity.”

Speaking of dealings with North Korea, Richardson says, “You’ve got to respect their culture. You’ve got to try to connect with them personally. You can’t give them State Department talking points about how they practice human rights abuses and torture. You don’t give them any good, nice rhetoric, but you’re respectful.”

He adds: “You try to learn where they are internally and mentally at the time of the meeting. You want to learn what their current thinking is.” The seasoned diplomat says you need you need to ask, “Why did they agree to me with me? They must want something.”

Richardson says he has benefitted as a negotiator by having lived “between worlds,” the title of his 2005 memoir. He grew up in Mexico City, the son of an American banker and Mexican mother. Spanish was his first language.

“This allowed [me] to appreciate other cultures besides America, so when I was negotiating, for instance, in Latin American with Fidel Castro and Maduro [Nicolás Maduro Moros, president of Venezuela], I would speak Spanish and it would make for a better personal connection that might lead to a breakthrough,” Richardson explains. “I believe in general that anybody that has an appreciation of other languages, cultures, ways of life, has an advantage as a negotiator, as a lawyer.”

The 2008 presidential candidate also points to his experience in Congress, holding frequent town hall meetings, as a training ground for his later work. “My congressional district was very, very diverse. A large Hispanic community, a large Native American community, a large Anglo cowboy community, with a lot of land and water issues that needed to be settled,” Richardson recounts. “Many times, I would take officials with me and we would try to settle or mediate at the meeting itself. That got me going into negotiations, trying to resolve problems.”

Richardson’s foray into hostage negotiation happened by accident. “You could say I was in the wrong place at the wrong time,” he muses.

In 1994, Richardson was in North Korea as part of a congressional delegation tied to dismantling the country’s nuclear facilities. While there, an American military helicopter happened to be shot down after flying over the demilitarized zone into North Korean airspace. One of the pilots died in the crash, and the other was in captivity.

Secretary of State Warren Christopher gave Richardson his marching orders: Do not come home without Bobby Hall or the remains of David Hilemon. Richardson refused to leave and after two weeks the mission was successful.

“I was worried that they were not going to respond to me, and I was going to end up a prisoner myself,” Richardson kids. “Eventually, it worked out.”

“Learning firsthand that I had helped an American reunite with his family is one of those good feelings that does not subside in a hurry,” Richardson says. He now had a side-gig, which has led to nomination for the Nobel Peace Prize on five occasions.

Richardson’s negotiations are sometimes atypical. Usually, “negotiators are balanced, coherent and willing partners.” But for him, they are often “narcissistic despots and power-hungry tyrants who cared more about their own skins than their own countries.” He says he has sat “across from some of the most unpredictable and irrational people on the planet.”

In 1995, Richardson was in Iraq to try to win the release of two American contractors sentenced to eight years in prison for wrongfully entering the country. Richardson, while meeting with Saddam Hussein, crossed his legs, revealing the bottom of his shoe—an insult in Arab culture.

It was unintentional. But the Iraqi President slammed his fist on the table and stormed out of the room.

“I remember asking the foreign minister, ‘Is he coming back? Am I toast?,” Richardson recalls. “He said, ‘He is coming back, but you must apologize. So Saddam came back. You know, he had these beady eyes and he started staring at me. And I decided, well, I am not going to apologize. I am going to be respectful. And I think he kind of respected that.”

Many believe that trading for hostages makes bad policy. It encourages America’s enemies to take more Americans as prisoners.

“Look, I don’t agree with that premise. You can’t be lily-white and lily-perfect. It’s going to take something,” Richardson retorts. “We have to stand by our Americans. We can’t leave Americans behind, and there’s often a price to pay.”

There are “no hard and fast rules” when it comes to negotiation, Richardson says. Nonetheless, the former ambassador has some fundamental principles that he employs, ones that lawyers can apply to their own negotiations.

First and foremost, “You have to talk,” Richardson tells me. “Negotiation is about engagement. Communication is better than silence. Argument, reasoning is better than stonewalling. Yeah, I agree, talk is cheap, but you can’t afford to not talk to each other. You are not going to resolve things by just insulting and not talking to each other. My view is that you personally engage.”

Then, he says, “once you get your deal, take yes for an answer and take it quickly and leave. Leave. Don’t let them second-guess.”

“I have been criticized for saying this,” Richardson adds, but “dealing with a dictator is easier than dealing with a country that has rules and parliaments. If you connect with a bad guy, a dictator, you’ve made the deal, you don’t have to wait around.”

In some cases, Richardson says, “don’t ask for a yes.” Rather, “assume a yes. Then merely pose it as a fact and see if they object.” If they don’t, “take it, it’s yours.”

While negotiation is about compromise, don’t always demand one, Richardson advises. Instead, “invent the compromise together.”

When he arrived in Sudan to secure the release of the trio of Red Cross workers, the rebel leader Bol asked for $10 million. “I started laughing,” Richardson recalls. “I said, ‘Forget it. Let’s have a meal and find common ground.’ And the common ground was, I invented a compromise. I said, ‘Listen I just toured your health care facilities. I just learned your little daughter died because you have no doctors here, you have no medicine. What if I get you some medicine and some Red Cross supplies?’ ”

In exchange for medicine, food and other humanitarian aid—and no money—Bol agreed to free the hostages.

These days, Richardson runs the Richardson Center for Global Engagement, a nonprofit organization that promotes global peace and dialogue by engaging with countries and communities not usually open to more formal diplomatic channels. The center’s activities include negotiating for the release of prisoners and hostages held by hostile regimes or criminal organizations. It also provides training and advice to governments and nongovernmental organizations transitioning to democracy.

“I have learned how to negotiate with some pretty bad guys,” Richardson says. But “my fundamental principle is, just because they are bad guys doesn’t mean you can’t get a good deal.”