Fake victims, fake cops and the myth of entrapment in Netflix's 'Why Did You Kill Me?' 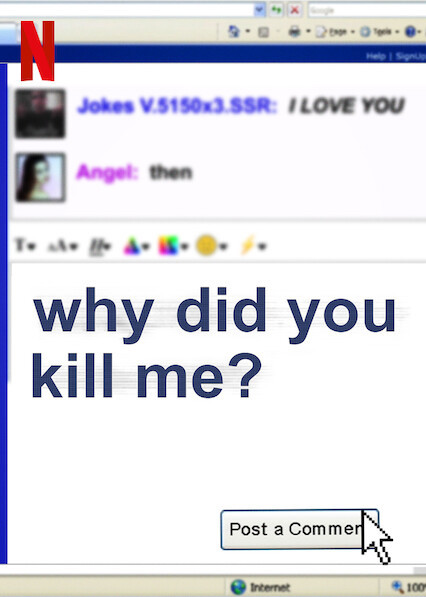 Every once in a while, I’ll hit a wall with this column. The problem usually arises when I have too many irons in the fire at the office. I’m currently battling through the COVID-19 backlog of cases and trials back on schedule now that courts are opening up and jury dockets are becoming more regular.

Recently, as I was looking for something new to review, that proverbial brick wall reared its ugly head again. My mind is (rightfully) focused on an upcoming stabbing case set for trial soon, and it’s challenging to divert my attention to anything else.

So I decided to step back and let the column come to me instead of trying to make lemonade out of lemons. Before this most recent mental bump in the road, I told myself I would stay away from Netflix because a slew of my recent installments have come from that streaming station. I failed.

As my wife and I were scouring Netflix for something to watch in bed (half the time, the simple act of searching through such a voluminous library can put us to sleep), we stumbled upon a documentary title with an interesting question: “Why did you kill me?”

Released in April 2021, Why Did You Kill Me? follows a family as they use social media (specifically, Myspace) to track down and investigate the individuals responsible for their loved one’s death. One of the most intriguing aspects of the show is the use of model figurines and structures used to set the crime scene. I’ve never seen this type of recreation employed in a true crime setting, and I thought it added novel appeal.

There were times when I thought the witnesses’ connection to the figurines is a tad played up for emotional value. There were other occasions when I felt trapped in some odd amalgam of Peytonville and Beetlejuice—but overall, the gimmick was well-received. Otherwise, though, there isn’t much to distinguish Why Did You Kill Me? from the rest of Netflix’s endless bounty of true crime offerings. The film is relatively short at 83 minutes, but it is engaging enough to keep its audience’s attention for at least that long.

If nothing else, the family’s determination—specifically, that of the deceased’s mother and 14-year-old cousin (who run the fake Myspace account)—leaves the audience with an important tangible connection: If someone you loved was murdered, would you do everything you could to find the culprit and bring them to justice?

My wife questioned whether private citizens could act in such a capacity. Specifically, she wondered whether law enforcement could use an “investigation” of that type to move forward with prosecuting the suspect. Was Why Did You Kill Me? an outlier?

I reminded her of the Elisa Lam documentary we watched and I reviewed in March, explaining the pros and cons of private citizens investigating a crime and how they could assist in the result. In the same breath, though, I had to acknowledge how that activity can also curtail the investigation if individuals don’t conduct themselves properly or potentially contaminate otherwise admissible evidence.

After all, as I’ve noted before, internet sleuths can sometimes cause more harm than good. Nevertheless, as Why Did You Kill Me? and other cases show, online investigations conducted by regular Joes can be beneficial. However, not all online vigilantes are created equally.

Take the online “Predator Poachers” for example. Perhaps piggybacking on the To Catch a Predator series, which ran from 2004 to 2007, this group sets up online stings so they can approach perpetrators and film the encounters for their YouTube page. In one episode I viewed (in which they schemed their way into the home of a possibly mentally disabled person), the “poachers” were run out of the house simply by the family’s threat to contact law enforcement. It seems the poachers’ intent is merely to embarrass the perpetrators for YouTube views instead of attempting to assist law enforcement.

To a minimal degree, I understand the mentality behind their process: Child predators are dangerous, and our children need to be protected. But as this article from the Star Herald relays regarding one of the “Predator Poacher” stings, the involvement of non-law enforcement actors posing as underage individuals isn’t sufficient to show a violation of the law in many jurisdictions. As I mentioned earlier, the average person’s involvement can potentially hinder the legal process.

That’s due to the fact that, in many states, the crime of making lewd proposals to a minor or child enticement must be committed against an actual child under a certain age (anywhere from 16 to 18, depending on the state) except in circumstances where law enforcement is portraying the underage individual. A large portion of my practice is devoted to defending the accused against sex crimes accusations, so I’ve run into this fact pattern more times than I can count.

In Oklahoma where I practice, the vast majority of law enforcement officers and agents conducting online stings with suspected child predators receive specific training and belong to a Crimes Against Children task force. They have to undergo unique training regarding the procedure and process for setting up the online sting and executing the steps necessary to secure probable cause for a search or arrest warrant.

They are trained to act as underage individuals and move illicit conversations to the point where the willing participant will send sexually explicit comments or material to the undercover officer. Often, they will let the conversation progress to a proposal to meet in person with the perpetrator.

Which brings me to the most prominent complaint I receive during intakes with potential clients facing these types of charges: “This is entrapment!”

Entrapment occurs when there is inducement on the part of the government actor. Merely presenting the suspect with an opportunity to commit a crime is not entrapment. A good analogy is “opening the door” to criminal activity: Law enforcement officers can open the door for a suspect to step through and commit a crime, but they cannot push the suspect through the door by use of force, threats, harassment, fraud, flattery or any other directly or indirectly coercive action. Even though government actors can lie to suspects, they can’t use heavy-handed force or coercion.

When it actually occurs, entrapment is an affirmative defense on the part of the accused that shifts the burden and forces the prosecution to prove entrapment did not happen. As such, it can be a very viable strategy. However, it is rare today to see genuine instances of entrapment. Law enforcement officers are trained to a point where they know the ins and outs of the laws and how best to exploit them in their favor.

For this reason, if for no other, it’s crucial to leave most of the fact-finding to the professionals. They know how far the law can protect the integrity of the investigation. Even though private actors can’t entrap defendants, they can still cause plenty of other issues.