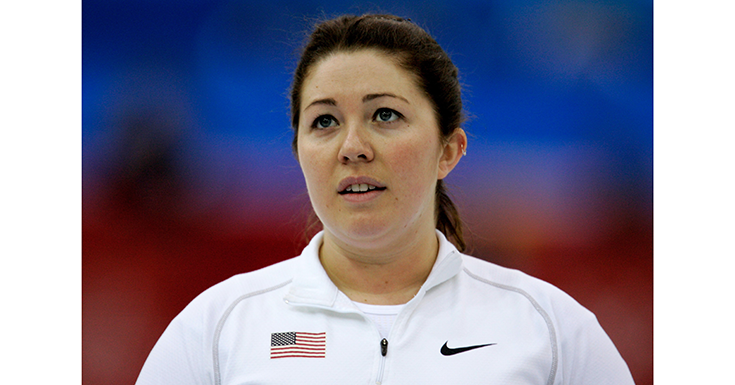 At the 2006 Winter Olympics in Turin, Italy, Maureen Brunt Clark competed for the United States in curling. Photo by Robert Laberge/Getty Images.

“Surreal.” That’s how Maureen Brunt Clark describes marching in the opening ceremony of the 2006 Winter Olympics. Dressed in a white jacket adorned in blue and wearing a red beret, Clark was experiencing this dream-like feeling in Stadio Olimpico Grande Torino, in Turin, Italy, as a member of the U.S. curling team. As a curler, she explains, “you are not used to being in stadiums of that size.”

With the Olympics getting under way this week in Beijing, curling will make its quadrennial appearance in American households. And for many viewers, watching players sweeping ice with a broom will no doubt leave a quizzical look on their faces.

Three years after representing her country in the Italian Alps and taking eighth place, Clark turned her attention to something more familiar—law school. 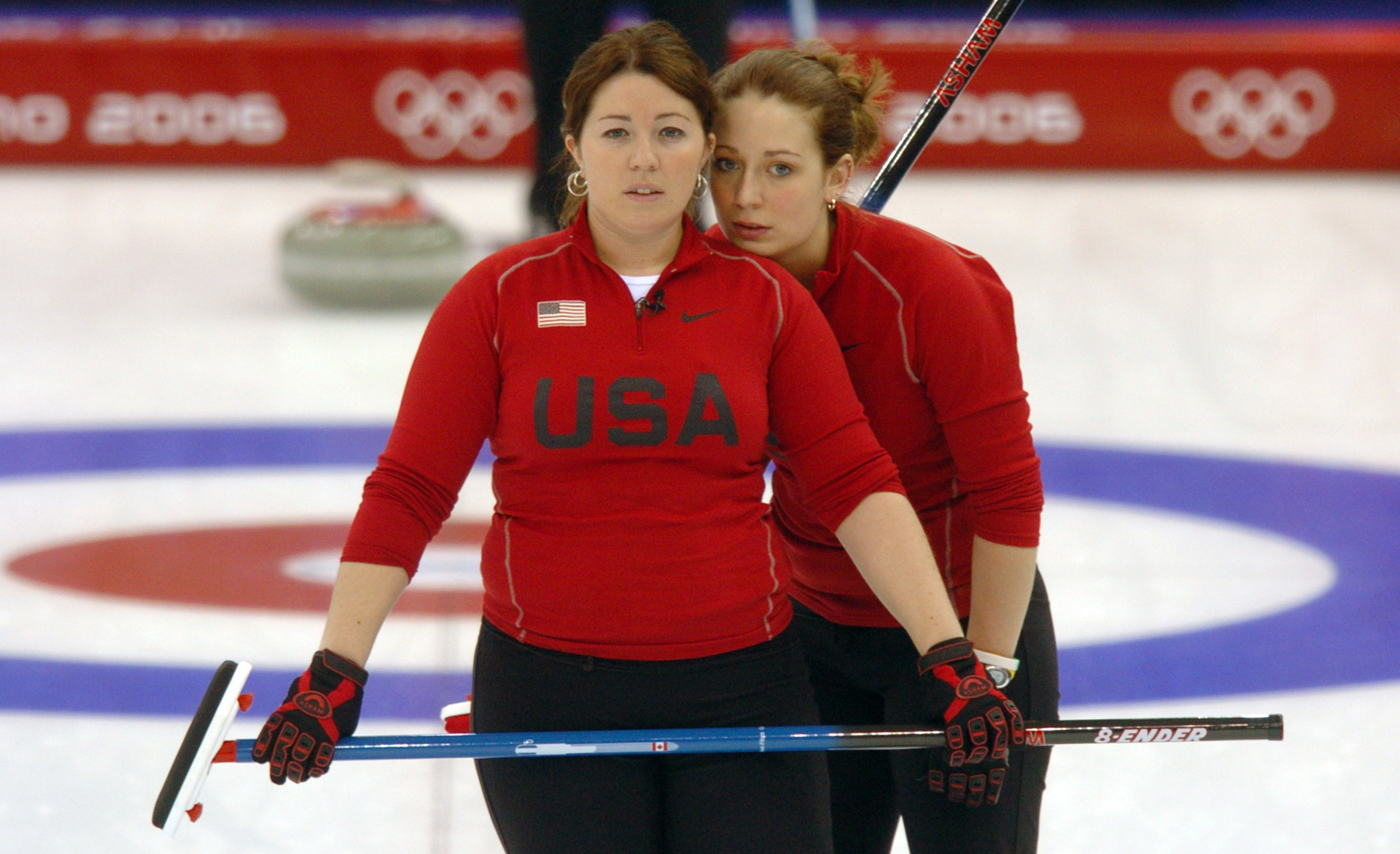 Maureen Brunt Clark (left) and Jessica Schultz of the American team watch as the Canadians slide their stone down the ice at the 2006 Winter Olympics. Canada defeated them, 11-5. Photo By Cyrus McCrimmon/The Denver Post via Getty Images.

In a phone interview last week from Minneapolis, Clark, now vice president and senior corporate counsel with U.S. Bank, gave me a tutorial on the sport to which she has devoted a lifetime. Being an elite athlete also prepared Clark for William Mitchell College of Law (now Mitchell Hamline School of Law) in St. Paul, Minnesota.

Clark, 39, a native of Portage, Wisconsin, began curling at age 6 and competing as a teen. “That’s when I realized that I really liked the sport, there were lots of opportunities, and I traveled all over the place,” the Olympian tells me.

“Curling was a family event,” Clark says. “Everyone in my hometown knew what curling was. Not only did my high school have a curling team, but it was offered as part of physical education class in high school.”

Clark’s road to curling’s biggest stage was paved with numerous state and national championships while in high school and attending the University of Wisconsin at Madison. In 2005, her team took the silver at the world championships in Paisley, Scotland.

The how-to of curling looks more confusing than the tax code. But, in fact, Clark needs just a few minutes to explain the game, and I have the basics down.

Cassie Johnson of the United States delivers her stone as Courtney George (left) and Maureen Brunt Clark (right) prepare to sweep during the 2006 Winter Olympic Games. Photo by Brian Bahr/Getty Images.
How to curl

In Olympic curling, two teams, each with four players, take turns sliding an approximately 42-pound polished granite stone—mined in Ailsa Craig, Scotland—down a 150-foot sheet of ice toward a large circle, called the house, with a small circle located in the center—the button. Each team slides eight stones (also called rocks) that make up an “end.” It’s like an inning, Clark tells me, putting it in a more familiar context. Points are awarded in each end to only the team with stones closest to the button. The winner is the team with the most points after 10 ends.

There is also a “physics part that comes into curling in some way,” Clark explains. Unlike hockey, with its glass-like ice, the surface in curling is pebbled.

“Like an orange peel,” Clark describes it. While the stone is sliding toward the house, players, using a brush or broom specifically for curling, sweep the ice. This causes the pebble to melt, which controls the distance and direction—but not the speed—that the stone travels.

Curling calls for some physical abilities, Clark says, for the sweeping and balance required. Muscle memory also plays a significant part. “So much of curling,” she explains, is “doing things the same way every time. The tiniest little wobble could throw off your whole rock.”

After failing to qualify for the 2010 Olympics, Clark turned to law school. She was motivated by a lifelong love for reading and learning. “The law offers an opportunity to continue learning,” she tells me. “New concepts, new information. I’m a sucker for anything that I get to learn about.”

For more than just the obvious, it would be a different experience for the retired curler. “As an athlete, all through college, I was always focusing on multiple things. For law school, I just wanted to concentrate on one thing. It was great to be able to put all of my energy into law school.”

As a world-class athlete, Clark understood the immense importance of practice and preparation. This she brought with her to William Mitchell. “It helped in coping with the deadlines and all the work that you needed to do to prepare. I was ready for that,” she tells me.” I knew what I needed to do. I knew how to get through it.”

Curling also taught Clark a lesson she brought to her subsequent career. “Just as the tiniest wobble can make a huge difference in curling,” she says, “how you speak to a client or draft a contract also requires a lot of precision.”

Many watching curling are no doubt thinking, “It just doesn’t look that difficult. I could do it.”

Clark lets out a chuckle at my observation. She’s heard it before. “As a younger person,” she says, “[hearing that] was a little frustrating.” But not anymore.

"People see it on the Olympics and they think, 'If I was going to go to the Olympics, that's the sport I could do.' " —Maureen Brunt Clark

Even in Turin, the curlers faced disrespect. Clark recounts one such instance: “We had a reporter show up and say, ‘I brought my curling iron. I’m ready to curl.’ Literally had a curling iron in their hands as they’re coming to interview an Olympic team.”

USA Curling, the sport’s governing body, counts about 190 member clubs throughout the country with close to 27,000 individual members.

Curling captures people’s attention during the Olympics—the Gold Medal match in 2018 had 7.5 million viewers. How can that interest be sustained after the games are over? “That’s the age-old question,” Clark says.

The answer may lie in what’s going through viewers’ minds as they watch.

“People see it on the Olympics,” Clark says, “and they think, ‘If I was going to go to the Olympics, that’s the sport I could do.’ It makes it accessible. Drawing on that accessibility is the way to continue to engage people.

“Curlers are also welcoming and want to share their love of the game with anyone that is interested,” Clark adds. “If you like watching it during the Olympics, give it a try. Go to usacurling.org and find a club near you with an open house.”