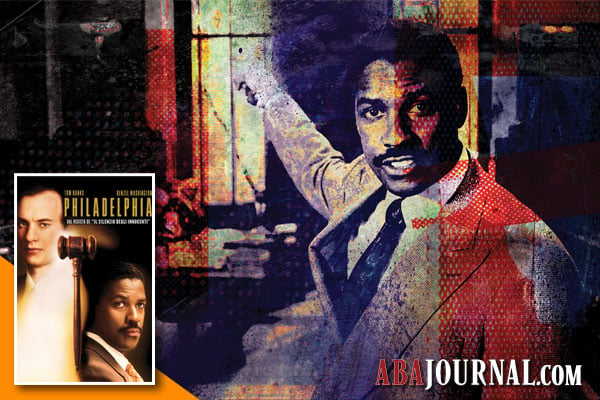 Denzel Washington stars as Joe Miller, an initially reluctant lawyer for an HIV-positive gay attorney, Andrew Beckett. Played by Tom Hanks in an Oscar-winning performance, Beckett was fired after his firm learned about his illness, and he decides to take the firm to court for wrongful termination. Miller is out of his element both as a personal injury lawyer and as a homophobe, and he and Beckett must develop a solid working relationship and mutual respect.

Scene: When Beckett approaches Miller and asks him to represent him, Miller says, “All right, explain this to me like I’m a 4-year-old, OK, because there’s an element to this thing I just cannot get through my thick head. Didn’t you have an obligation to tell your employer you had this dreaded, deadly, infectious disease?” Beckett attempts to explain his legal position, but Miller leans back and tells him, “I don’t buy it, counselor. I don’t see a case.”

After Miller experiences a change of heart and decides to represent Beckett, we see that “explain this to me like I’m a 4-year-old” is Miller’s most common catchphrase—although the precise age he uses varies. Eventually, when we’re shown a scene of the jury’s deliberations, the jury foreman sums up the defense’s argument and says to his fellows, “Explain it to me like I’m a 6-year-old, because I just don’t get it,” and is met by a chorus of laughter.

The jury finds in favor of Beckett, awarding him $5 million, and Miller is able to share the news with him at his hospital bedside just before Beckett dies from AIDS complications.

Lesson for lawyers: “Explain it to me like I’m a 6-year-old” is more than a catchphrase; it’s a philosophy. Often lawyers will rely on obfuscation and sophisticated legal maneuvers to prevail in a case. But try breaking down a case into elements so basic it could be explained to a small child. It’s not only a useful thought exercise for yourself. It may be the best way to break through to a jury that is not naturally inclined to be sympathetic to your client.

Another lesson Philadelphia holds for lawyers was brought up when Schopf & Weiss featured the film for its annual CLE program “Movies on Trial” at Chicago’s Music Box Theatre in May. Panelist Fay Clayton said the movie shows most clearly the “transformative nature of representation” and how the attorney-client relationship can come to affect our most deeply held beliefs and prejudices.