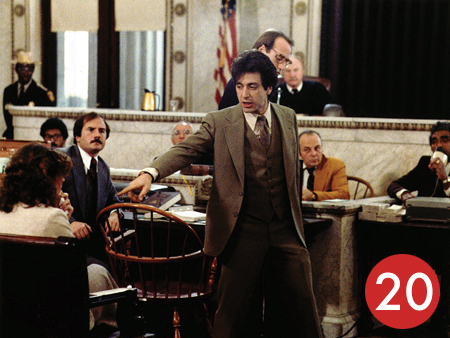 An angry Al Pacino (is there any other kind?) plays Arthur Kirkland, the very best lawyer he knows in Baltimore. His client is losing his marbles; his girlfriend is losing her patience; the senior judge plots suicidal fantasies. Moreover, he is trapped into representing a judge accused of rape—a judge who is gleefully ignoring the incarceration of a very in­nocent and distressed Kirkland client.

All of this is thrown together in a final courtroom harangue that makes Pacino’s bank robber mugging in Dog Day Afternoon sound like Trappist prayer. You think I’m outta order? Hey, courtroom or not, it’s Pacino.

Trivia: Jack Warden, who plays a suicidal judge, appears in two other films on the ABA Journal’s “25 Greatest Legal Movies”, 12 Angry Men and The Verdict.