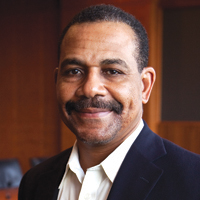 Every day in private practice, Roderick A. Palmore thought about how he could distinguish himself as a lawyer. As the first black partner at Chicago’s Wildman, Harrold, Allen & Dixon, some say he had little choice.


Every day in private practice, Roderick A. Palmore thought about how he could distinguish himself as a lawyer. As the first black partner at Chicago’s Wildman, Harrold, Allen & Dixon, some say he had little choice.

Now executive vice president, general counsel, and chief compliance and risk management officer at Minneapolis-based General Mills, Palmore is judging how law firms out­pace their competition.For Palmore, 57, diversity based on race and gender figures prominently in his decisions, and he’s one of the first general counsel to evaluate outside firms’ diversity efforts.

Those that repeatedly get low marks lose his company’s legal busi­ness. While he was at Sara Lee, Palmore says, two firms lost the international conglomerate’s business, and firms scoring in the bottom tier (he did not disclose how many) lost at least 50 percent of their work.

A reserved man with a shy smile—and someone who can tell employees about their weaknesses in a kind way—Palmore is credited with refocusing corporate diversity discussions onto how it can bolster company profits.

“His whole point was to put di­versity into something that’s actionable and not just based on principle,” says Andrea Zopp, general counsel at Exelon, the Chicago-based power company. She worked for Palmore at Sara Lee, where until 2008 he was GC and an executive vice president.

In 2004 Palmore spearheaded the Association of Corporate Counsel pro­gram Call to Action, in which other GCs agree to evaluate outside law firms’ diversity efforts. As in the plans Palmore devised, those who do not get good marks will lose business. So far more than 100 general counsel, many from Fortune 500 companies, have signed on to the call he authored.

Evaluation criteria haven’t been decided, but if the plan works like those Palmore previously led, general counsel will first evaluate their own depart­ments’ diversity, then look at the numbers of women and people of color at outside law firms in both partner and associate ranks. The retention rate of those two groups is compared to the firm’s overall retention rate, and information is submitted an­nually for three years to give a sense of wheth­er the outside firms are improving.

The plan was introduced at an April summit for general counsel and managing partners at large law firms. No members of the media were allowed, “so no one would be playing to any other audience,” says Palmore. Concerns about appearances were tossed aside, and participants discussed their real concerns.

“In the past, people were interested in being politically correct. If they weren’t, they’d get beat down,” he says. “You won’t make any sort of progress if that’s the case.”

Brett J. Hart was a partner at Sonnenschein Nath & Rosenthal when Sara Lee started its diversity evaluations. He later joined Sara Lee as assistant general counsel, and when Palmore went to General Mills, Hart was tapped as his replacement.

Hear Rick Palmore talk about his Call to Action.

Some managing partners, Hart says, didn’t appreciate Palmore tell­ing them they weren’t doing enough about diversity. It was a new conversation, but Palmore anticipated their reactions. “At that time, a lot of people from law firms would admit to us that before Sara Lee asked for the information, they didn’t know the answers to some of the questions,” Hart says.

Five of the lawyers Palmore has mentored, including Zopp and Hart, have gone on to lead Fortune 500 legal departments. They say Palmore can be somewhat parental; while at Sara Lee, he once corrected Hart for chewing gum during a meeting.

“He’s one of those few people who can really call you on the carpet, but when he’s done you understand it’s in your best interest,” Hart says. “He’s mindful about things that will take attention away from how good you are, so you are not tripping yourself up when you don’t even know it.”

Hart and Palmore met at Wildman Harrold when Hart was a summer associate. Both graduated from the University of Chicago Law School. Hart, who is also black, didn’t realize the firm had a black partner until he met Palmore. “He easily could have been standoffish and I probably wouldn’t have pushed to spend time with him,” Hart says. “He pulled me in immediately.”

The third of five children, Palmore grew up in the Pittsburgh suburb of Monroeville. He didn’t know lawyers growing up but still wanted to be one since he was a child. When asked whether he was the smart one of his siblings, Palmore demurs, noting his oldest brother was the first black Phi Beta Kappa to graduate from the University of Pittsburgh, earning a degree in biochemistry. Their parents, who didn’t finish high school, came to Pennsylvania during the Great Migration, when blacks left the South in the early 20th century.

Palmore’s undergraduate education at Yale was funded with scholarships, loans and jobs. Besides the Uni­ver­sity of Chicago, Stanford Law School also accepted Palmore. Chica­go, he says, seemed like a safer choice, being closer to home.

“I’d never been to the West Coast,” he says. “We didn’t take vacations; my father worked in the [Westing­house Air Brake] mills his entire life.”

After a brief stint with a Pitts­burgh firm, Palmore came back to Chicago to work in the U.S. attorney’s office, and he considers the city his adopted home—so much so that when he took the General Mills job in Minneapolis, he and his wife, Lynne, kept their historic home in suburban Oak Park. Palmore spends at least one weekend a month there.

A son, Adam, recently graduated from Washington University in St. Louis, and his daughter, Jordan, just finished law school at the University of Pennsylvania.

Palmore notes that when he graduated from law school in 1977, firms said they’d like to hire more people of color and women, but they couldn’t find any.

“Inevitably, some folks are going to get this, and they are going to distinguish themselves on a performance basis,” Palmore says. “If you don’t get it, you will miss out on some opportunities that others will have.”