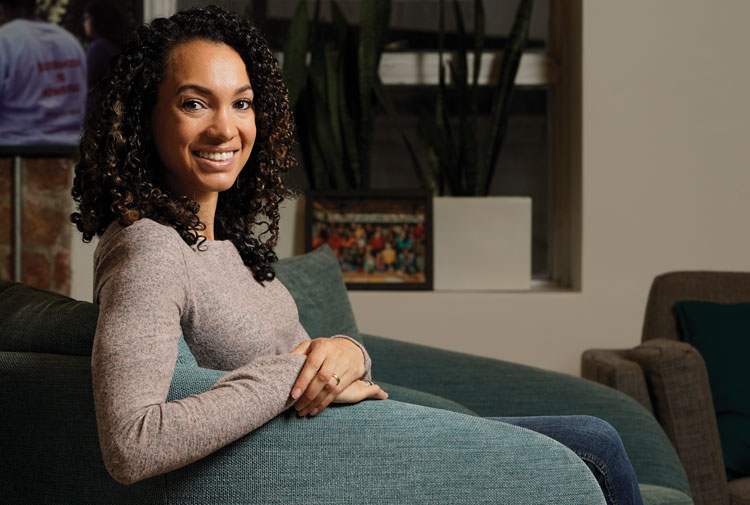 When Catalina Palacios got an email nominating her to join Essie Justice Group, she didn’t know why.

“I thought, ‘For what? I never do anything,’ ” says the Oakland, California, health educator, who was nominated by her daughter. Thinking that it could help her child, Palacios decided to join the 5-year-old organization, which centers on empowering women with loved ones who are behind bars so they can work together to end mass incarceration. Part of the program is a nine-week session that focuses on collective healing, sharing resources and helping participants advocate for themselves and others.

“Once I got there, I realized that my daughter was OK, and I was the one who needed support,” Palacios says. “The idea is to break down the isolation so you don’t have to walk alone. We go through this empowering process so we can advocate for each other.”

Gina Clayton-Johnson, a 2010 Harvard Law School graduate, founded the organization, named after her great-grandmother, in 2014. She says many women are nominated by people who are in prison.

“The invitation into leadership is not something like, ‘We heard you are broken and sad, and down and out.’ It’s saying, ‘We need you. We see the work you are putting in, and we value that; we need that in our movement,’ ” says Clayton-Johnson, 36, a Los Angeles native who named the group after her great-grandmother.

Besides the sessions, Essie Justice Group organizes around ending the money bail system. It published a national report about women and incarceration in 2018 and has been part of a national Mother’s Day event to bail black mothers out of jail. This year they bailed out two women in California.

Like the women she works with, Clayton-Johnson has a loved one who was sentenced to prison. Her group prefers not to disclose details about why family members were incarcerated.

Before starting the organization, Clayton-Johnson worked with Neighborhood Defender Services of Harlem doing housing work. Women made up her entire caseload, and many had loved ones who were incarcerated. “They were the matriarchs of their families, and the backbones of their communities.

“I realized that there’s a big problem with mass incarceration that we’re not seeing as much research on—that 1 in 4 women have a family member in prison,” she says, citing the group’s 2018 report, titled Because She’s Powerful: The Political Isolation and Resistance of Women with Incarcerated Loved Ones.

Essie Justice Group recently opened a second office, in Los Angeles, where Clayton-Johnson now lives. She serves as its executive director and works with seven others employed by the organization.

So far, 150 women have completed the Essie Justice Group sessions. Two weeks before Mother’s Day 2019, the group received 300 nominations for the next cohort.

“This is where our potential lies because if we can build a community of love and power with all of these 300 women, that can look like the leadership we need to reconstruct what systems of care and community really look like,” says Clayton-Johnson.