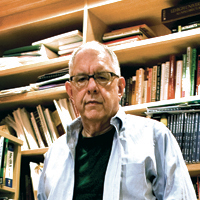 Richard Granat doesn’t smile or show much facial expression when he talks—often for long periods of time—about his numerous online ventures, all of which focus on using the Internet in legal services delivery to underserved firms and clients.


“He just gets these concepts and he becomes obsessed, almost like a venture capitalist,” says Arthur Brill, a tax partner at New York City’s Roberts & Holland who has been friends with Granat since their junior high school days in New Rochelle, N.Y.

“I don’t know of too many people, outside of creative artists, who just come forth with these concepts like he does.”

When they were children Granat persuaded Brill to join him in buying collector-quality stamps, sure it would earn them millions. That didn’t happen. But Granat’s plans evolved over the years, influenced by his early work with the National Legal Services Program during the Johnson administration and later at a school he founded in Philadelphia, the first to offer a specific training program for paralegals.

A solidly built 69-year-old who wears nerd-cum-hipster horn-rim glasses with polarized lenses that give him a senior G-man look in the sunshine, Granat works out of his house in Palm Beach Gardens, Fla. The floor in his home office serves as a filing system, and he uses three computers simultaneously—a Macintosh desktop to watch Twitter feeds and stock quotes, a PC for actual work and a MacBook Air to walk around with when the desk chair bothers his back.

“He’s always saying, ‘I’ve got this new idea—what about this?’ You’re never sitting around doing the same old same old,” says Pam Andrew, director of law firm development for Epoq U.S., a business Granat founded. Epoq U.S. partners with a firm in the U.K. that uses a technology platform to deliver complex legal documents to consumers and small businesses.

Granat and his wife, Nancy, have four grown children, and when he meets employees in person, their families are invited too. “Richard tells them to bring the kids, and there will be babies all over the floor,” Andrew says.

He may see them as future clients. Granat describes young people as the “Facebook and MySpace generation” and says they will eschew the traditional ways of getting legal services, where one has to physically go somewhere, often during business hours, and usually pay for parking.

His various webpages cater to their anticipated needs. One site, MDFamilyLawyer.com, offers family law forms bundled at a fixed price with legal advice to residents in Maryland and Washington, D.C., where Granat is licensed. Users answer a set of questions—how many children they have, their separation date, whether they own property—generating a form for court filings. Contested cases are referred elsewhere.

Granat spends about 30 minutes daily with that site, and it earns him about $100,000 a year. The site focuses on simple matters; he estimates that only about 10 percent of the users require forms with customized language.

Another site, DirectLaw, licenses Granat’s technology to small firms and solo practitioners. Once the site gets 50 users, he plans to create a community for them—to exchange ideas and “let them complain about me.”

“My whole scheme … was to try and figure out a way to make a good living and also serve people who need it,” he says.

As an undergraduate at Lehigh University, he was a philosophy major in a bastion of engineering students. By senior year, Granat was thinking about how the function of lawyers in society would change.

In 1962 he enrolled at Columbia Law School, where he started the Law Students Civil Rights Research Council. The group placed students in Southern states to work on desegregation matters.

At Columbia, Granat also got to know Edgar and Jean Cahn, aca­demics who wrote a law review article that served as the blueprint for the National Legal Services Program. After graduation he got a general counsel spot with the agency, which later became the Legal Services Corp.

He also founded the Philadelphia Institute for Paralegal Training, which the New York Times called “the Har­vard of the paralegal profession.” While there he got a master’s in organizational development from the University of Pennsylvania in 1990. He used his thesis to create Auto­mat­ed Legal Systems, which published legal applications for PCs.

Granat started thinking about online legal services in the mid-’90s when few attorneys, particularly those in the access-to-justice arena, knew much about the Internet. He was working part time as an adjunct professor at the University of Mary­land’s clinical program, helping pro se litigants with family law matters.

A grant helped Granat create what is now Maryland’s Peoples Law Li­brary, a self-help website maintained by the Maryland State Law Library. Although he was bringing in money, faculty members then didn’t understand how the Internet was relevant in legal services.

“He was in this tiny, window­less office talking about things that sound­­ed really extraordinary—and surreal,” says Susan Erlichman, ex­ecutive director of the Maryland Legal Ser­vices Corp., who met Granat at the school. “He seemed a little uncomfortable speaking about all sorts of things he was doing. I remember thinking, ‘Huh, this guy is a little out there.’ ”

Today she describes Granat as “absolutely beyond cutting edge.”

Photos in article and slideshow by Matthew Pace