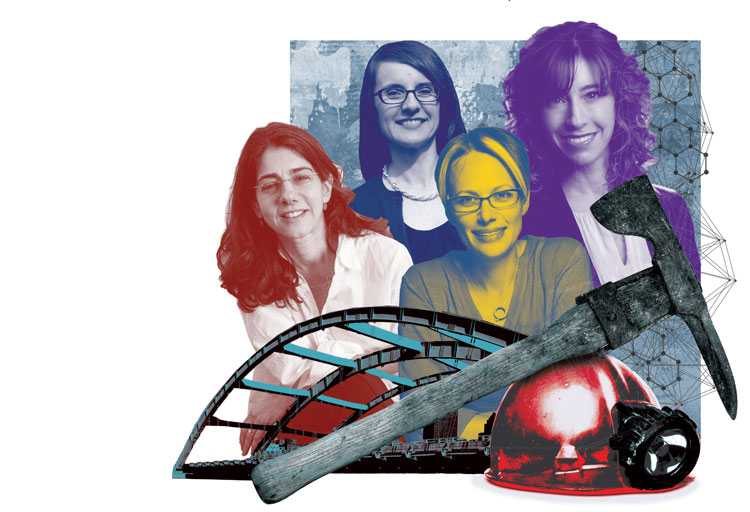 After finishing law school at Stanford University and clerking at the Atlanta-based 11th U.S. Circuit Court of Appeals, Amy Bach spent her time sitting in the back of county courtrooms, listening and taking notes.

What she witnessed was a mess. She saw one judge set bail rates much higher than his colleagues, and she came across a local prosecutor who hadn’t brought a domestic violence charge in over 20 years. She also met many defendants who pleaded guilty even though their lawyers didn’t know the facts of their cases.

But she could only show others these problems when she could find them, which was a challenge in a system without data.

“I really learned what justice looked like in big cities and small corners of this country,” says Bach, 51, who worked as a freelance journalist at the time.

She brought these individual stories of wrongdoing together in her book Ordinary Injustice, published in 2009. Not just a collection of woe, the book was a call to action for a new system of oversight built on data and performance metrics.

“In the absence of metrics, each single flawed case can be put down to he-said, she-said mismanagement,” she wrote. While acknowledging that metrics aren’t a panacea, she added: “They are the tools we need to ask for the courts we deserve.”

In 2011, Bach took herself up on her proposal and founded Measures for Justice. While starting as a team of two contractors without funding, the Rochester, New York-based nonprofit employs 40 people today. Together, they travel the country unearthing, cleaning and publishing county-level criminal justice data in what they hope will be each of America’s 3,141 boroughs, counties, independent cities, parishes and the District of Columbia.

“I found her idea really interesting, and I very quickly understood what she was trying to accomplish,” says Bill Ackman, co-trustee of Pershing Square Foundation, which provided a donation of $3 million in 2014. “Just by making the data available, she could change the world.”

How they do it

In 2017, the organization released data from its first six states through its online portal: Florida, North Carolina, Pennsylvania, Utah, Washington and Wisconsin. While the data available varied from state to state, it included the time it took to resolve a felony case, the use of jail beds and the length of prison sentences. The organization expects to release another 14 states’ data by the end of 2020.

The organization’s director of operations, Samantha Silver, 45, has an executive MBA and previously worked in marketing before joining the organization as a consultant in 2011. She had not worked in criminal justice. By contrast, Mikaela Rabinowitz, 40, joined in 2018 and is currently the director of national engagement and field operations after a decade working in criminal justice system evaluation and advocacy.

“Across both of those jobs, one of the critical challenges that I saw was a lack of data,” Rabinowitz says. Measures for Justice “felt like exactly what was needed.”

Gipsy Escobar, 45, started to moonlight at Measures for Justice in 2012 while keeping her tenure track professorship at Loyola University Chicago. “What really made me leave academia to join MFJ was the immediacy of the impact that we could have,” she says as the current director of innovation research.

The organization’s zeal is not only winning over employees, but criminal justice stakeholders as well.

“They’re very passionate about bringing transparency and good data to the criminal justice system,” says Jeff Reisig, the elected prosecutor for Yolo County, California. “I could hear it in their voices.”

Reisig, who has spent more than two decades in the prosecutor’s office, is excited about Measures for Justice’s potential to clean up the state’s data situation and improve criminal justice reform.

“The reality then—and frankly the reality still now—is that data in California is very fragmented, it’s not comprehensive,” he says, adding that there’s no central repository where someone can track a case. “When it comes to criminal justice data in California, I feel like we’re still driving a horse and buggy.”

Since having embraced more aggressive criminal justice reform in 2014, California has recategorized some nonviolent felonies as misdemeanors, curtailed the use of adult charging of youth offenders, legalized marijuana and greatly curtailed the use of cash bail, which will be put to a public vote in November 2020.

Reisig says that without better data, “a lot of these reforms are shooting into the wind, hoping these things work.”

The situation may be changing, however.

Measures for Justice was central to both.

In Florida, legislators realized the gap in the state’s criminal justice data and passed a first-of-its-kind law in 2018 that will lead to the collection of about 140 data points across the criminal justice continuum—from arrest to release—standardize that data across the state and publish it online.

“I never expected the Florida legislation,” Bach says. But she’s embraced the new angle to their work, because “this is clearly where the puck is going and where people want to play.”

Now, the conservative legislative agenda-setting organization the American Legislative Exchange Council has published model legislation based on the Florida law, and the criminal justice reform committee at the nonpartisan Uniform Law Commission is considering the topic for further review. As of the fall, a half-dozen other states are looking to pass similar legislation, Escobar says.

Bach and her team expect that as more data becomes available, people will build new tools that can provide insights to journalists, policymakers and criminal justice system stakeholders like courts, defense lawyers and prosecutors.

Meanwhile, as the organization barrels ahead, Silver says that its rapid success comes down to the people involved.

“Our team and leadership, we are much more than the sum of its parts. We have an amazing ability to challenge each other in a healthy way and strive for excellence,” she says. “We’ve been quite successful because of that.”

This article first appeared in the February-March 2020 issue of the ABA Journal under the headline “Data Mining: Measures for Justice is bringing about reform by traveling the country to discover, disseminate and distribute criminal justice data”