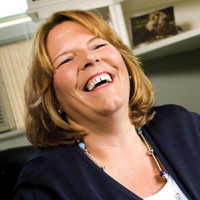 It’s midnight, and corporate paralegal Denise Annunciata sits in her corner office, bleary-eyed, staring at her computer screen. There’s no view to relieve the tedium—her office being in the corner of her back bedroom in Framingham, Mass.

As she tackles a mountain of securities matters (aka blue sky work) in front of her, the other half of her brain rapidly sifts through ways to handle the unending influx of work.


It’s midnight, and corporate paralegal Denise Annunciata sits in her corner office, bleary-eyed, staring at her computer screen. There’s no view to relieve the tedium—her office being in the corner of her back bedroom in Framingham, Mass.

As she tackles a mountain of securities matters (aka blue sky work) in front of her, the other half of her brain rapidly sifts through ways to handle the unending influx of work.Ding. An e-mail pops up. It’s a resumé from Atlanta paralegal Kathy Rasler, looking to join Annunciata’s online paralegal venture.

No time to look at it. Delete. Ding. Then a follow-up e-mail: “Oops, I forgot to mention my specialty is blue sky.” Problem solved.

“I tell all the attorneys that Kathy dropped out of the clear blue sky,” Annunciata says, laughing.

Rasler’s serendipitous appearance is a perfect example of the way Annun­ciata developed her business, Virtual Paralegal Services: a coffeehouse brainstorm here, a few lucky referrals there and her hopes of earning a modest income working from home, leveraging 22 years of big-firm experience.

But Annunciata’s good fortune is actually the result of decades of hard work, financial sacrifice, creation of another online firm and a heady dose of perfectionism.

Annunciata launched her compa­ny in June 2006. Her firm drafts corporate resolutions, license agreements and Uniform Commercial Code state­­ments for solos and small law firms across the country. She responds to e-mails within minutes—sometimes seconds—and often turns assignments around within 24 hours.

In its first six months, VPS earned nearly $45,000, half her former law firm salary. In 2007, revenue topped $350,000 with the addition of one paralegal. Today VPS is a full-service, seven-member paralegal firm—including litigation, probate, patent and securities specialists—and is on target to earn about $750,000.

The kicker: VPS charges clients only $80 per hour, about $200 less than a large firm would.

“Every year revenues are crazier than I’ve ever expected,” Annun­ci­ata says.

The 53-year-old single mother of one daughter gives an exasperated sigh as she recounts her frustrations at the lack of technological support at her last law firm employer. “I know I’m a good paralegal,” she asserts. “I knew how to do the work, but my stuff wasn’t there.”

She means her bag of tricks: the forms, tips and reminders needed to complete tasks like dissolving a corporation quickly and correctly. She had gathered those materials while with a previous employer, but they became that firm’s property and she couldn’t take them with her.

“I would look at the computer and I would ask, ‘Why can’t I go to Google to remind me?’ I decided that would be the coolest thing in the world, to have those resources, because wherever you were, you could be a great paralegal.”

When pitches to Lexis and Westlaw failed, Annunci­ata created her own online resource, LeapLaw, supplying forms of agreement or director-stockholder consent, procedural updates and information on doing legal business in any of the 50 states.

But when the challenges and costs of building an online business proved daunting, Annunciata supplemented her income by taking on corporate paralegal work from former lawyer colleagues, as well as referrals. LeapLaw is also a source of new clients, though a minor one.

“Denise had the skill set and the entrepreneurial drive to get it done,” Boston attorney Steve Shishko says of founding VPS. “She has hundreds of ideas. She’ll say, ‘One has to work; I’m going to figure out which one it is, and I’m going to make it work.’ ”

Making it work involves fostering respect and camaraderie among the VPS paralegals and their many cli­ents through an online platform Annunciata is constantly perfecting.

Although expanding VPS seems the next logical step, Annunciata insists her plan has a more personal goal than to increase revenue.

After jumping from one law firm to the next, “I realized you can’t leave a job for the money, and you can’t go back,” she says. “I sort of stumbled, but when I found this, I created a job I love.”