A focus on developing communities is a significant part of Monica Bay’s writing, and she says that’s why she was drawn to legal technology.

Selected as a Legal Rebels Trailblazer by the ABA Journal, Bay worked for American Lawyer Media for 30 years. Seventeen of those years were spent as editor-in-chief of ALM’s Law Technology News (now Legaltech News).

“What satisfies me the most is how breathtakingly positive technology is,” says Bay, who retired from ALM in 2015 and is now a freelance writer and a fellow at CodeX—the Stanford Center for Legal Informatics. “These tools—you can’t be afraid of them. They’re going to make things easier, faster and more transparent.”

Bay began her career in journalism writing music reviews. “I’m told I’m one of three women who were reviewing rock ‘n’ roll at the time,” she says. “If you can get very savvy, smart but often drunk musicians to talk to you articulately after a massive arena concert—and convince them that you are not a groupie and you aren’t going to sleep with them—you can do anything.”

An investigative report about United Way fundraising while she was community affairs director at what was then Sacramento’s K108 FM radio station drew her to legal writing.

“The experience got me interested in subpoenas,” says Bay, who graduated from the University of San Francisco School of Law in 1982. “I got tired of condescending male lawyers who were not taking me seriously. And I wanted more ammunition for my journalism.”

She spent almost two years practicing law. The experience showed her that the legal profession tends to be technology-averse. “The baby boomer lawyers were so entrenched with the idea that ‘only the girls touch anything with a keyboard’ that they absolutely refused to do anything involving tech,” she recalls. “They thought it was beneath them.”

Now, Bay says, the profession has moved beyond the thinking that technology is something solely reserved for support staff.

“If you don’t learn tech,” she notes, “you are not going to be relevant anymore.”

Podcasts with Monica Bay and other Legal Rebels Trailblazers are also online at legaltalknetwork.com.

Updated April 21 to correctly state that Bay graduated from law school in 1982. 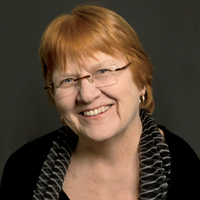 Monica Bay is a freelance writer and a fellow at CodeX, the Stanford Center for Legal Informatics. She worked for American Lawyer Media for 30 years. She earned her law degree at the University of San Francisco School of Law in 1983.