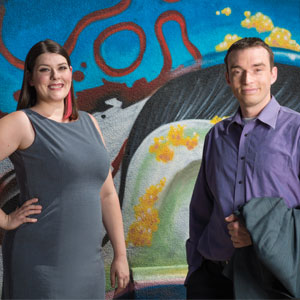 The words nonprofit and law firm don’t usually go together. But Salt Lake City attorneys Shantelle Argyle and A. Daniel Spencer saw no reason why they shouldn’t.

“One thing people don’t understand about nonprofits is that they’re ubiquitous,” says Spencer, who along with Argyle started Open Legal Services in the fall of 2013. “We don’t know why people don’t typically think of nonprofit and law going together. Is it because of tradition or lack of understanding? Who knows?”

Argyle, 34, and Spencer, 33, met as students at the University of Utah’s S.J. Quinney School of Law. At first, both were looking at careers in the public sector, albeit on opposite sides.

“Dan wanted to be a prosecutor while I wanted to be a public defender,” Argyle says. “We both have families and were looking for stable jobs with loan forgiveness. We had no intention of starting our own firm.”

However, when they graduated in 2013, the job market had yet to bounce back to pre-recession levels, and competition for public sector jobs in Salt Lake City was tough.

“Dan was a former financial planner, and it was his idea to set up the firm as a nonprofit,” says Argyle. “It’s been done in medicine and finance, so we decided to try it for law.”

The advantages of nonprofit status for lawyers are many, as the Open Legal Services website attests. They are eligible for the federal Public Service Loan Forgiveness Program, they pay less in taxes, they can solicit donations and recruit volunteers, and they can receive referrals from courts and other nonprofits that might not be allowed for for-profit firms.

There’s an entire demographic group in dire need of representation, Argyle notes, but they’re falling through the cracks because they aren’t poor enough to qualify for free legal services but don’t make enough money to afford most lawyers.

“We were looking for a way to serve them and stay in business,” Argyle says.

Open Legal Services does not offer free legal services. Instead, the firm keeps its hourly rates low: A single parent with one child making $24,000 per year would qualify for an hourly rate of $65, while a family of four bringing in $47,500 annually could pay as little as $95 an hour.

Argyle and Spencer say the firm, which consists of four other attorneys, one paralegal and an assistant director who has a business background, keeps its rates low through a combination of in-kind donations and lean overhead. And the firm’s attorneys boast a wide range of skills that allow Open Legal Services to keep many matters in-house.

“Rather than hiring IT and finance people, we can do that ourselves,” says Argyle, who has a background in computer technical support. “Some firms that have a low-overhead model can’t do this.”

Likewise, the firm’s board of directors consist of professionals from a variety of fields, including law, finance and other nonprofit organizations. Argyle says she and Spencer wanted variety in order to promote a holistic legal approach.

“Our philosophy was: “Let’s get a family law person [on the board] who can help us set up a fee structure for cases or a criminal law person who knows judges that would be willing to refer cases to us, and maybe government people who know about the banking industry,” she says.

“I wasn’t surprised that more firms haven’t gone the nonprofit route,” Telfer says. “I’ve found that lawyers don’t really think outside of the box. However, [Argyle and Spencer] were able to exploit their skill set and create a model that works.”

Argyle and Spencer, who each reported salaries in the high $30,000s in 2014, hope to increase their salaries—and those of their employees—this year to be competitive with other small firms in Salt Lake City.

The firm currently focuses on family and criminal law, and Spencer says he hopes to expand to include bankruptcy and immigration, although he thinks they might be problematic for Open Legal Services.

“With hourly rates, it’s easy for us to predict how much we can bring in,” Spencer says. “Bankruptcy is often flat-fee work and makes things less predictable for us. You could end up working for free, and that’s not something we really feel comfortable with.”

In the meantime, Argyle and Spencer hope to continue strengthening the link between nonprofits and law firms.

“The biggest thing is goodwill,” says Spencer. “By being a nonprofit, we’re not here to make lots of money. We have an incentive to actually provide efficient service and the best service possible at the lowest price. As a nonprofit, we are not presumed to be just another law firm.”