All is well for BigLaw? Not if you talk to clients and really crunch the numbers

I spent the last 10 days on vacation. I returned to these stories:

Wow, that’s a lot of back and forth for just 10 days. What can be made of it?

First, the American Lawyer’s robust defense of BigLaw seems to be an aberration, especially when one digests the points raised by Bruce MacEwen in his CAGR piece. Am Law utilized the 2009-2013 time frame for its general analysis, but only looked at the compound annual growth rate for the last two years to support its conclusion that life was just rosy in BigLaw land. Adjusting for inflation and headcount changes at law firms shows that “the Am Law 100 were not even holding their own during the 2009-2013 period. Indeed, their growth rate would have needed to be 23 percent higher that it was just to keep even with inflation and headcount growth.” Mr. MacEwen makes similar analysis showing growth since 2008 and 2007, both comparisons showing even greater deficiencies in performance. While I am not a statistician or economist, both my own view and that of several experts I consulted suggests that The American Lawyer just got spanked.

The view that all is hunky-dory in BigLaw land also seems inconsistent with the reports suggesting general counsel are unhappy with their rates, and the anecdotal evidence provided in the New Republic stories. Is it possible that the story provided about Mayer Brown is an aberration, that Mayer is an anomaly? It hardly seems so. From the New Republic:

It was only when I suggested that a mere fraction of the world’s BigLaw firms would survive another decade or two that I grasped the bone-fatiguing chore of running such a business. “[Mayer Brown’s Managing Partner Paul] Theiss wouldn’t endorse the premise, but he didn’t exactly refute it, either. Demand had stopped growing, he told me. There was ‘substantial overcapacity.’ Billable hours were way down industry-wide. “I don’t think anybody who follows the profession would suggest that this is only a temporary situation,” he said. The longer Theiss spoke, the bleaker the picture became.

We need only look back a few weeks to Weil Gotshal’s termination of staff and associates and its “adjustments” to partner compensation. The New York Times’ Dealbook blog reported that firm’s managing partner, Barry Wolf, stated that the firm “believes that these actions are essential now to enable our firm to continue to excel and retain its historic profitability in the new normal.”

While it is gratifying to hear firms like Weil embrace the “new normal” terminology, it is plain that neither Weil Gotshal nor Mayer Brown are aberrations. Both are elite firms. The problems of both are systemic. It is unlikely that either firm is making management decisions based on assumptions that the worst-case scenario will unfold. But it is worth asking if either firm, or any other, has a concrete plan for increasing profit margins on lower revenue. Nothing reported suggests that kind of sea change in either firm, or any other BigLaw firm for that matter. 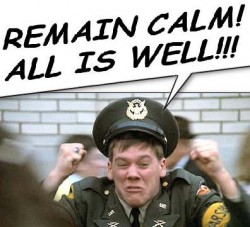 No one will hold any bake sales for the partners in either of these firms. But it will be worth watching to see how both, and the other 98 firms that make up the profession’s largest firms, will respond to pressures that are growing. If the management of that class of firms takes the American Lawyer’s “remain calm! All is well!” approach, their destiny is the same as Kevin Bacon’s character in Animal House—sidewalk art.

For those not part of the BigLaw scene, the lessons are still important ones. The pressure to do more with less is relentless. To succeed under that pressure, we need to focus relentlessly on cost control, process improvement and risk acceptance, and on how we can better advise our clients on each of these.

Pat is the author of the the book Alternative Fee Arrangements: Value Fees and the Changing Legal Market. He also blogs at In Search Of Perfect Client Service.