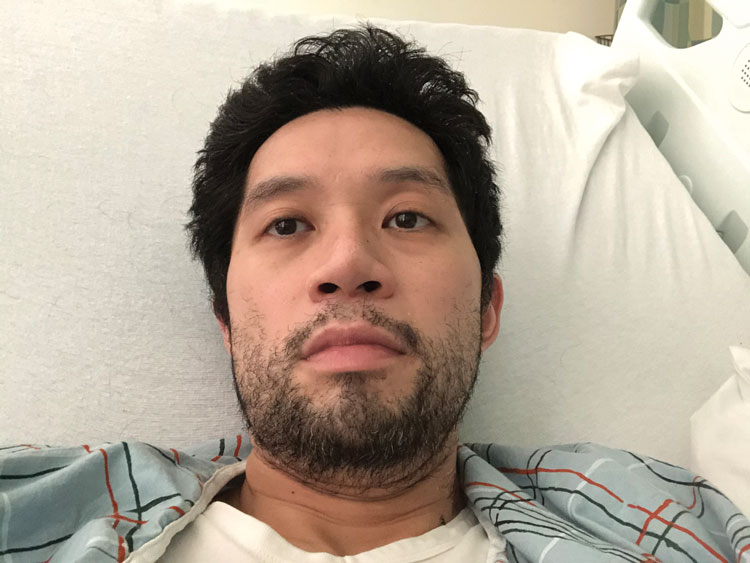 Lawyer, journalist and publishing entrepreneur David Lat has spent nearly two decades covering the ins and outs of the legal world. From high court chambers to BigLaw boardrooms, Lat has shared gossip, news and opinion, first through the judiciary-focused Underneath Their Robes blog he founded while working as a federal prosecutor and later through the popular legal news-and-views site he co-founded, Above the Law.

Rarely, however, has Lat stood at the center of a news cycle. That changed with COVID-19.

In mid-March, Lat became one of the first 500 confirmed cases in New York City. The physically fit 44-year-old spent 17 days in the hospital, including six days on a ventilator, before beginning the long, arduous recovery process that continues today. His ordeal was documented not only by national legal news outlets—ABAJournal.com included—but also by mainstream media, including CNN, the New York Post, the New York Times and the Daily Mail. Lat appeared on the Today show, was interviewed by Rachel Maddow and had his own piece published by the Washington Post about his experience on a ventilator.

Lat left Above the Law last year to become a managing director in the New York City office of Lateral Link, a nationwide Los Angeles-based legal recruiting firm. Which means he now occupies the unique position of being able to offer hope to people fighting this deadly disease and help to lawyers whose careers, clients and cases have been upended by it.

COVID-19 is a new illness, with no clear timeline for recovery. In those first days and weeks following your discharge from the hospital, how did you approach your recovery? How did you keep your mind and body focused?

I took things a bit slowly at first, trying to notch little victories here and there. When I first came home, I could hardly walk; I had to use a wheelchair. Eventually, I graduated from the wheelchair to walking, and then from walking short distances to walking a few miles. I’m very into metrics, and so I would try to measure things to keep my recovery on track—for example, increasing my walking distance or increasing the numbers I would hit on the incentive spirometer, a device I was given to help rehabilitate my lungs.

You have nearly 100,000 followers on social media, and you’ve been engaging with them since you first posted that you’d tested positive. Did you always intend to share your illness with the public?

I kind of came at it by accident. After I got my positive test result, I wanted an easy way to let my contacts know that, if they came down with symptoms, they should get tested, so I went to Facebook and Twitter and announced it. I got a lot of support from those messages, so I thought, “It’s fairly early, and we don’t know a lot about this, so let me chronicle this in real time.” I discovered there were a couple things I wanted to get across. One: It’s not exclusively a disease of the elderly or infirm. Two: I wanted to underscore public health warnings about wearing masks and exercising caution. I wanted people to understand why we have certain measures in place.

Your April 1 Twitter post, where you announced you were finally being discharged from the hospital, has been liked by nearly 162,000 people and has been retweeted more than 9,000 times. How does it feel to have so many people invested in your recovery?

I was surprised just at the extent of it. I’ve always been grateful to have a large network of family and friends, but I have heard from a lot of total strangers through Twitter, including patients struggling with the disease themselves or people with family members who have it. But the amount of support has been touching and overwhelming—in a good way.

I want to pivot and ask, what’s it like right now in the legal recruiting world?

Certainly in recruiting, things have been a little slow—and different. One thing that’s different is that recruiting has had to take place virtually through interviews on Zoom, Skype and similar tools. I have one candidate who was interviewed, hired and onboarded, all virtually. He’s been at his firm since late March, and he has never set foot in their physical offices.

What do you say to lawyers whose job searches are on hold? What should they be doing?

I always say, focus on developing your skills. It could be legal skills—this is certainly a good time for doing your online CLE—or it could be learning a new skill like coding. At Lateral Link, we had a workshop on how to sharpen your Microsoft Excel skills. There are things you can do when you have less billable work to make you more efficient when you do have billable hours. Lawyers often say, “I am going to write articles,” but they don’t get around to it. Anecdotally, lawyers I am talking to are not working at 100%, they’re working more like 60% to 70%, so that means they have time to work on that article. Of course, when I tell people, “This is a great time to do X,” there’s one big qualification: You may have different responsibilities now, like child care or elder care. It’s complicated, and we’re really all just trying to do the best we can under the circumstances.

I wonder if there’s a lesson in this pandemic about career resiliency and how maybe you don’t need to have a concrete career plan. I mean, you’ve been a judicial clerk, a BigLaw associate, an assistant U.S. attorney, a journalist and now a legal recruiter. I can’t imagine you had a plan for all of that.

I certainly had no grand plan! My career unfolded organically, and I think that’s a good message for lawyers. As long as you’re enjoying what you’re doing and you’re still learning, don’t feel like you have to stress about the next five or 10 years. If you feel stagnant, then that’s the time to think about what to do next.

Although sometimes I think lawyers can be hesitant to make major career changes because they’re beholden to status and money.

Absolutely. Right out of law school, my succession of jobs was an exercise in downward mobility, but I feel that as my salary went down, my satisfaction went up. It would be great if everyone could follow their interests instead of their personal finances. But I realize that’s a luxury; careers are in many ways a matter of compromise.

Several years ago, you wrote a novel called Supreme Ambitions, loosely based on your experience as a judicial clerk. Has your experience fighting COVID-19 provided inspiration for another writing project, maybe a second novel?

I definitely feel that what I have been through would play some role in a new writing project—maybe some type of nonfiction project—but I haven’t figured out what that would be yet.

How about a children’s book!

I think a children’s book would be fun, especially now that I am reading stories to our son. I have sometimes thought, “How hard could it be? It’s not 75,000 words, and there are lots of pictures.” But there’s actually a lot of creativity and ingenuity that goes into some of these books.

At some point in the future, the worst of the pandemic will pass. Do you think any silver linings for lawyers will emerge from this ordeal?

I do think so. We are working less, and we seem to be OK with it—a lot of people are discovering that they like to have meals with their families. There also will be more flexibility when it comes to remote appearances. I don’t think this will replace in-person hearings—there’s still a benefit to being in court with litigants and advocates—but in cases where it would be difficult or expensive, it’s now an option that’s not alien or a huge imposition. A lot of status conferences, routine appearances and uncontested proceedings could be done remotely. My husband is a lawyer, and he just handled a sentencing remotely. I also think it has increased civility and compassion in our profession. I heard a story where a bunch of New York City lawyers working on a document production got a call from opposing counsel in Atlanta who said, “Hey, we know you’ve been hard hit up there. We’re happy to agree to an extension.” That just struck me as very nice. This kindness may just be temporary—once things are back to “normal,” we may go back to our old ways. But this has been so hard and so long-lasting that it might be difficult for people to go exactly back to business as usual. For better or for worse, for those of us who had COVID and those who did not, this time will go down as one of the most consequential periods in our lives.

This story was originally published in the August-September 2020 issue of the ABA Journal under the headline: “Survival Skills: David Lat on conquering the coronavirus, pursuing dreams”