10 Questions: Raj De's career has taken him from 9/11 Commission to White House to NSA 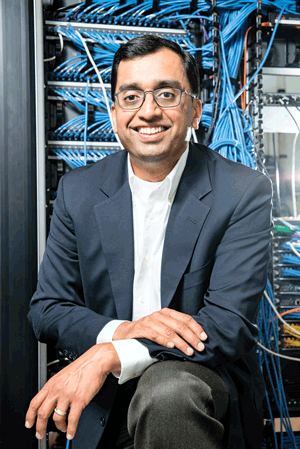 Nearly 20 years ago, a young Harvard Law School student named Raj De sat in his mentor’s office and explained why he’d decided to bypass BigLaw for the Department of Justice.

The older lawyer understood completely. “You should always go where the action is,” he counseled.

De took this advice—and then some. Leadership roles at the DOJ? Check. 9/11 Commission? He was a part of it, serving as counsel and contributing to its historic final report. U.S. Senate? Check that off, too: De was counsel to the committee charged with drafting and implementing intelligence reform legislation.

Then came two dizzyingly busy years at the White House, where De worked directly with President Barack Obama as staff secretary. The follow-up? Three years as general counsel to the National Security Agency, where he helped steer the agency through perhaps its biggest crisis—the leak of countless classified documents by former contractor Edward Snowden. De left the NSA last March for the private sector, returning to the Washington, D.C., office of Mayer Brown—the law firm where he was a partner before working with the NSA—to direct the firm’s global cybersecurity and data privacy practice.

Raj De joined us for 10 Questions Live on Oct. 20. Watch a recording of the event, which included questions submitted by readers, at this link.

Q. Cybersecurity is one of the hottest practice areas right now. How did you get into it?

A. After my experiences at the NSA and with the White House, I started to see what a prominent issue it was for our government. The NSA isn’t just an agency involving foreign intelligence gathering; its other mission is information assurance, a function of effective cyberdefense.

Q. How do you talk to your clients about cybersecurity, outside of an NSA context?

A. It can vary. We work with very sophisticated financial entities and technology trailblazers, but we also work with companies in a range of industries where cybersecurity has not been top-of-mind. For some of those entities, we may have to explain why they may be a target for cybercrime. We explain that they may not see themselves as a primary target, but sometimes it’s not even an issue of what data you may have but what networks you are connected to. Any system may just be an entry point for a hacker.

Q. Is there a typical day for you?

A. Yes, and it usually involves an airport!

Q. It must be pretty different from the days when you flew on Air Force One with the president. What was that like?

A. It was exciting the first time and exciting the second time, but then it quickly becomes part of your work rhythm. I would say that I never stopped appreciating what an incredible opportunity it was, but it was tempered by just doing the job. For that role in particular, there is one customer—the president—and he’s a pretty focused customer.

Q. So you’re traveling a lot now for work?

A. It’s been just over a year since I’ve returned to private practice, so I am relationship-building: checking in with GCs, existing clients and potential clients. I am also doing a fair amount of public speaking and presenting to boards of directors.

Q. You did some public speaking at the NSA, too, right?

A. Yes. Up to that point, it was relatively unheard of for a GC for the NSA to give a public speech and try to articulate some sense of the issues facing the agency—of the legal challenges—and to bring some transparency to the oversight regime.

Q. Why did you want to do that? Did the NSA’s reputation as some sort of secret spy agency bother you? I mean, there’s that joke that NSA stands for “No Such Agency.”

A. The secret nature didn’t really bother me, but I think that there is an obligation in a democracy for all parts of the government to be as transparent as they can be, articulating what they do on a general level. It was important for the NSA, but it’s also important for any business with a public profile. If there’s an incident or a reputational crisis, and the first time a layperson hears about what’s happening is in that moment, without any context, it takes a lot of effort to unwind that first impression. I wanted to put some context out there so people would have a frame of reference.

Q. And there was a crisis: The Snowden affair was obviously huge news, yet you managed to stay out of the public eye. Was that by design?

A. The role of most good lawyers is not to be the center of attention unless it’s helpful. I did end up playing a fairly significant public-facing role dealing with media inquiries—it just wasn’t on camera. The NSA wasn’t equipped to deal with a media response. It used to be “no comment” was the most common historical response; but in any crisis, it’s important for the lawyers and the communications people to be integrated in managing public perception.

Q. You advocate transparency, but could Snowden’s actions be seen as the ultimate in transparency?

A. It’s possible to think that the discussion the public is having about digital privacy and surveillance is a positive thing, but that doesn’t mean that what Snowden did was justifiable or a positive thing in and of itself. I do think that this dialogue is important, but I really think that what he did was a terrible, self-aggrandizing and reckless thing. It’s a complex global environment, and I am not sure the general public fully understands how complicated the threat scenario is and how sophisticated our intelligence apparatus needs to be. I think the trick for us as a society is: How do we manage the persistent threat landscape and stay true to the values we hold dear?

Q. Is the Snowden affair over yet?

A. No. The implications of what he did will be felt for a long time. There were very real consequences for our national security that I don’t know if he realized, and the public can’t know because the government can’t speak about it. The need to mitigate the harm he caused is still ongoing, I am sure.

This article originally appeared in the October 2016 issue of the ABA Journal with this headline: “Live Action Hero: From the 9/11 Commission to the White House to the NSA, Raj De’s legal career has taken him to the center of it all.”