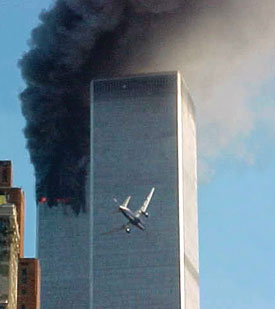 It was to have been a decade defined by the promise of the new millennium, a seemingly magical moment that would sever us from the last few years of the 1990s—the tawdry politics of impeachment, the irrational exuberance of the dot-com bubble, the dread of a Y2K digital disaster that never materialized.

Instead, the new century came to be defined by the twin terrors of a crisp Tuesday morning in September 2001, and the word war—once glibly reserved for public policies on literacy or poverty or drugs or cancer—took on a deeper, darker meaning. After the events of 9/11, war filled in the background of everyday life: in barriers erupting like acne on public architecture, in politely invasive searches by airport security, in the everywhere eye of a camera, in the erosion of words that redefined treaties and torture and the very nature of war.

Less than a month after the attacks on New York City and Washington, D.C., Congress passed and President George W. Bush signed the Uniting and Strengthening America by Providing Appropriate Tools Required to Intercept and Obstruct Terrorism Act. The USA Patriot Act, as it quickly came to be known, greatly expanded the ability of government agencies to gather and share domestic and foreign intelligence on individuals, whether or not they were U.S. citizens. It expanded limits on the scope and duration of wiretaps and on electronic data storage of credit card, banking and voicemail records. It broadened the definition of “money laundering,” expanded the ability of the government to seize foreign assets, allowed agencies to seek education records and eased compliance with courts established under the Foreign Intelligence Surveillance Act.

In its most controversial section, the Patriot Act also expanded the use of national security letters as a means of gathering information. The NSL, a form of subpoena, required no probable cause and forbade the recipient—usually a telephone company or Internet provider—from disclosing its existence, even to an attorney. By 2007, the government was using NSLs to also investigate U.S. citizens.

Armed with new authority, Bush authorized a series of programs at the National Security Agency aimed at developing new levels of surveillance and analysis. Early on, the programs needed to be reauthorized every 45 days. But as they continued, they gained lives of their own. It would be years before the reach of this escalation in signal intelligence and data-mining would be grasped by the public; in the meantime, there were more obvious concerns. 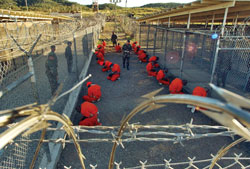 By January 2002, the government began housing prisoners—“enemy combatants” in the “War on Terror”—in Cuba, on a repurposed U.S. Naval base at Guantanamo Bay. In a series of secret memoranda, lawyers from the Justice and Defense departments argued that neither suspected al-Qaida prisoners nor their Taliban patrons were subject to the Geneva Conventions. And although terrorists had been tried successfully in federal courts on the mainland, government lawyers recommended a parallel system of justice at “Gitmo”—one specifically designed to escape scrutiny under international treaties or U.S. laws.

Despite vigorous disagreement by Secretary of State Colin Powell, White House Counsel Alberto Gonzales declared that the changing nature of war had rendered “quaint” many of the provisions called for by international norms. And on Feb. 7, 2002, Bush accepted his lawyers’ advice and ordered that the military comply with the Geneva Conventions, but only “to the extent appropriate and consistent with military necessity.”

What that could mean was clarified six months later by Jay S. Bybee, an official at the Office of Legal Counsel, who chronicled the evolving nature of torture, then redefined it in ways that allowed “enhanced interrogation” techniques to be used without the likelihood of prosecution under U.S. or international laws.

In 2003, just a few months after war began in Iraq, Amnesty International began to publish reports of human rights abuses—including beatings and sexual humiliation—against U.S.-held detainees at the notorious Abu Ghraib prison in Iraq. As months passed, more stories and photos of naked Iraqi prisoners being beaten or berated began to emerge. In 2004, the American Civil Liberties Union released a report by agents on assignment at Abu Ghraib, who admitted that a variety of extraordinary interrogation techniques had been used by military interrogators. The report allowed that the executive order signed by Bush had done much to confuse the issue of abuse.

In 2011, Congress reauthorized most of the USA Patriot Act. Obama, in Europe at the time, was unavailable to sign it at the White House. The bill was signed by autopen.

Photo of the World Trade Center on Sept. 11 by AP Photo.