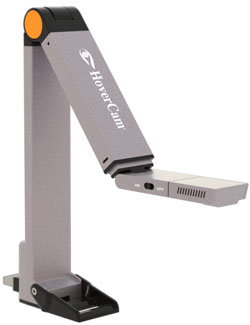 Gadgets for road warriors need to be compact and functional. I have been testing two devices that are both. One lets you easily scan and project documents anywhere. The other turns your mobile phone into a functional speakerphone.

Let’s start with the scanner. The HoverCam Mini 5 is actually a 5.0 megapixel autofocus document camera that does double duty as an overhead scanner and video projector. Use it to capture documents and receipts on the go or to give presentations in the courtroom or in meetings.

Folded for travel, the Mini 5 is roughly as big as a king-size candy bar, compact enough to carry in your pocket. It unfolds into the shape of an upside-down “L.” At the base of the vertical stem are a tiny stand that folds down for stability and a USB plug that folds down and connects to your laptop. At the end of the horizontal stem are the camera and an LCD light.

The first time you connect the Mini 5 to a computer, it installs the needed software. Installation takes just a moment, and the Mini 5 is then ready to use for scanning and video.

To scan, just place a document under the Mini 5. In the software, a live view of the document quickly comes into focus. Click “take picture” and you are done. Scans are captured in an instant and are sharp and clear. Settings let you choose the resolution and whether to save the scan as a PDF or image file. Optionally, you can zoom, crop and adjust document images before you scan.

An auto-capture mode handles stacks of documents. Place the stack under the Mini 5 and as you lift off each page, the next one is scanned automatically. Video mode is ideal for trial lawyers or anyone who wants to show or annotate documents in live presentations. Place the document under the camera and the software lets you project or record the video. Mark up the document, point to key portions and move through multiple documents–all in real time. The retail price of the Mini 5 is $299. It can be found at some online retailers for $249 or less.

CONFERENCE ON THE GO

The second mobile gadget is the Spracht BluNote + Chat, a compact Bluetooth speaker that can be paired with any Bluetooth-equipped smartphone, tablet or computer. It plays music, but its stand-out capability is as a wireless speaker for on-the-go conference calls.

For so small a device, the BluNote does a surprising job: It weighs just 9.5 ounces and measures just 9 by 3.25 by 1.375 inches. But its two speakers put out almost 5 watts of sound that is rich and clear for voice calls. It also has two high-quality microphones that pick up voices well and deliver them clearly.

This model is specifically designed for conference calling. When a call comes in, the caller ID number scrolls across the front LCD panel. Touch the phone icon on the top to answer the call. Touch it again to end the call. If you are playing music, touching the phone icon mutes the music until the call is over.

BluNote fits easily in a briefcase or luggage. A rechargeable lithium ion battery is rated for 12 hours of use. An audio-in jack allows you to connect non-Bluetooth devices.

BluNote + Chat retails for $99, though it is available through some online retailers for as little as $49. 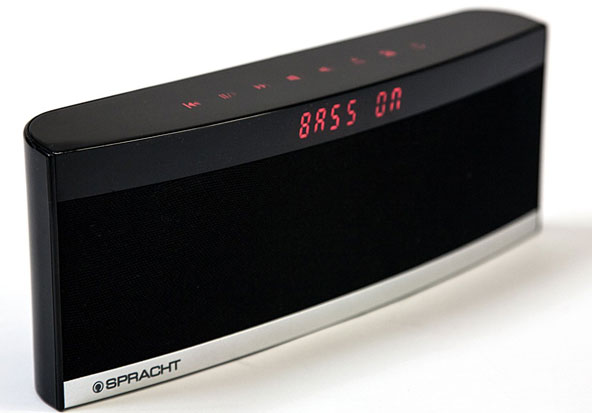 This article originally appeared in the February 2014 issue of the ABA Journal with this headline: “Goin’ Mobile: Two handy gadgets for road warriors.”

Robert Ambrogi is a Rockport, Mass., lawyer and writer. He covers technology at his blog LawSites and co-hosts the legal affairs podcast Lawyer2Lawyer.