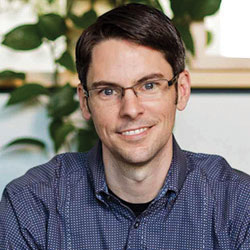 Rick Klau’s Silicon Valley experience has given him insight into what legal professionals need to do to stay ahead of the curve. Photo courtesy of Rick Klau.

Rick Klau thought he was a curious choice to be the keynote speaker at this year’s ABA Techshow. After all, he has never practiced law professionally and has spent most of his professional life running Internet startups. Indeed, since 2011, he’s been a product partner for Google Ventures, which links up entrepreneurs from portfolio companies with experts at Google.

However, Klau’s time in ever-changing Silicon Valley has given him unique insight into what legal professionals need to do to innovate and stay ahead of the curve. During his keynote address, Klau shared some of his insights and experiences with conference attendees, and he encouraged members of the legal industry to follow Google’s example when it comes to bringing about change.

Klau shared three important lessons he has learned during his time in Silicon Valley, adding that they could easily be applied to the legal industry.

Klau’s first lesson: He emphasized the importance of using data to make decisions. And he argued that facts and figures are exponentially more important than gut feelings and informed opinions. Klau, who worked on then-U.S. Sen. Barack Obama’s presidential campaign in 2008, mentioned how the campaign relied on data to determine what combination of website graphics and verbiage generated the largest amount of donations. Everyone had their own opinion as to what worked and what didn’t, but what mattered in the end, said Klau, was cold, hard facts.

“You can take the smartest people in the room and they’ll always be wrong,” he said. “We have to look at the data to get us to the conclusion. Anything else is a guess.”

His second lesson: The customer is not always right, so learn to say no. Klau spoke about his time at Google Inc., where from 2009 to 2010 he served as product manager for Google subsidiary Blogger.com. Blogger, one of the first blog publishing websites, used the antiquated FTP system.

Klau realized that less than 1 percent of Blogger’s users still used it. Despite that, FTP support took up a disproportionate amount of Google engineers’ time. The people who still used FTP were furious when Google eliminated it and migrated users to a different platform, Klau said, but the decision allowed Google to free up resources for more important matters.

“The customer is sometimes wrong,” he said. “You need to be the expert and know your product better than anyone else.”

His third lesson: Incremental change is the enemy of true innovation. Klau encouraged all legal professionals to think big and refuse to settle for anything less. For this, a video of Sergey Brin showed how, as a grad student in the early ’90s, he nearly settled for incremental change—a business that would allow people to order pizza via fax machine. Luckily for Brin, his fax foray left him and his fellow students hungry, and he turned his interest to other things that led to his co-founding of Google.

“When you commit to only 10 percent improvement, then the profession never changes,” Klau said. In that vein, Klau argued that small firms are actually in a better position to take substantial risks compared to big firms because big firms have too much money and too many resources at stake.

“You should not be limited by what others in your shoes have done before,” he said. After all, Klau noted, law firms didn’t always put timekeepers on matters so that they could bill thousands of hours; someone came up with that innovation.

“I would bet that many of the trends driving startups,” he said, “such as lower cost of infrastructure and easier access to capital, are similar in law.”

This article originally appeared in the June 2014 issue of the ABA Journal with this headline: “Klau’s Clues: Startup exec offers 3 lessons for legal innovators.”