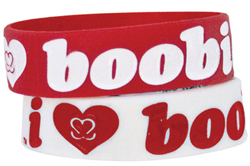 Black peace armbands, flag salutes and offensive comments on social networking sites have been the subject of free-speech fights in public schools. Now we can add breast-positive bracelets to the list.

Sold by the nonprofit Keep a Breast Foundation, the rubber bracelets feature the words “I ♥ boobies.” The tongue-in-cheek bracelets are designed to “act as an awareness-raising tool, allowing young people to engage and start talking about a subject [breast cancer] that is scary and taboo, and making it positive and upbeat,” according to the group’s website.

But some school officials around the country see it differently, claiming the bracelets are lewd and disruptive. School districts in California, Delaware, Florida, Missouri, Nevada, Oregon, Pennsylvania and Wyoming have disciplined or threatened to discipline students for wearing the bracelets to school.

Like their predecessors in free-speech wars before them, aggrieved students are fighting back. Last November, two students from Easton, Pa., sued their local school district in federal court claiming that the school’s ban on the bracelets violated their First Amendment rights. The students were suspended after they wore the previously banned bracelets on the school’s designated Breast Cancer Awareness Day.

“What really spooks me about this case is that it is difficult to get most teenagers to focus on anything other than dating, sports and social activities,” says Witold Walczak, legal director of the American Civil Liberties Union of Pennsylvania, which filed the suit on behalf of the Pennsylvania students. “Here you have kids who are unquestionably talking about something very important and socially responsible, and the school wants to shut that down. That strikes me as ridiculous.”