A class action asks: 'What is a craft beer?' 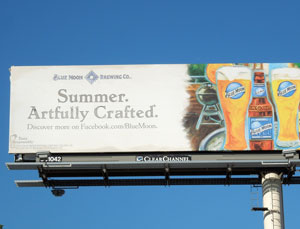 When is a craft beer not a craft beer? A class action lawsuit recently filed in California asks that question over claims that Blue Moon beer, despite its label as "artfully crafted" beer, isn't one because megabrewer MillerCoors owns the company.

The complaint, filed in San Diego County, claims that the beer company “goes to great lengths to disassociate [its] Blue Moon beer from the MillerCoors name.” The complaint further alleges that by using the name Blue Moon Brewing Co. on the bottles and in market-ing materials, MillerCoors is passing its beverage off as a craft beer and, in the process, deceiving consumers. “Defendant clearly does not qualify as a craft brewer,” the complaint states.

Does it? According to the Boulder, Colorado-based Brewers Association, the plaintiffs may have a point. The trade group uses three criteria to define what a craft brewery is: size (annual production of 6 million barrels of beer or fewer); ownership (less than 25 percent is owned or controlled by an alcoholic beverage industry member); and method (use of traditional or innovative brewing ingredients).

But beer industry attorneys say this argument may be hard for a court to swallow. Danielle Teagarden, an attorney with Reiser Legal in Seattle, says “the merits of this case are lacking.” As the beer industry grows, she says, so will beer-related lawsuits. While such suits may “give brewers pause thinking about what they put on their label,” there are already fairly strict federal regulations regarding the labeling of alcohol. The definition of “craft” is not one of them.

Candace L. Moon, a San Diego lawyer who calls herself “the Craft Beer Attorney,” finds the case interesting because of that murkiness. “I do not know that the general consumer has a definition of ‘craft’ in mind.”

Teagarden cites Seattle’s Elysian Brewing Co., which was purchased by Anheuser-Busch earlier this year. “If they didn’t change the processes from the day before to the day after, is that beer any less ‘artfully crafted?’ ” she asks.

This article originally appeared in the September 2015 issue of the ABA Journal with this headline: “Crafting a Definition: A class action asks: ‘What is a craft beer?’.”