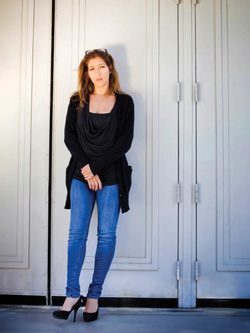 Allison Margolin says that “marijuana defendants today are really the only people who can afford a defense.” Photo by Sal Owen.

“I don’t defend people who are in business to make money,” explains the Phoenix-based solo who began specializing in marijuana cases in 1996 and launched the site PotLawyer.com in ’98.

“Those people carry weapons and sometimes are affiliated with organized crime, and I don’t have anything to do with them. Mostly, I defend mom and pop-type clients who may grow some and sell a little bit to handle tough financial times but didn’t set a financial objective of selling marijuana.”

Walz isn’t the only lawyer pushing his pot practice. “LA’s dopest attorney” is Allison Margolin, a partner at Margolin & Lawrence in Beverly Hills, Calif. She represents growers and distributors in cases related to the sale, production and transportation of marijuana. “We represent big-time dealers—or people who operate medical marijuana clinics,” she says. “People who are relatively smart realize they can run a marijuana-based business, but they have to do it through a medical contact.”

That’s because in California since 1996 and Arizona since 2010, weed smoking has been legal with an approved doctor’s recommendation; growing and dispensing is also permitted under certain circumstances. But use outside medical parameters can lead to harsh penalties. In Arizona, Walz says, possession of any amount of the herb is a felony.

Getting ribbed by colleagues comes with the territory. Since she’s open about lighting up legally, Margolin is sometimes the butt of digs from opponents asking whether she’s high. “But a lot of lawyers want to get into marijuana law,” she says. “Marijuana is a cash crop, and the marijuana economy is good. Marijuana defendants today are really the only people who can afford a defense.”

Both lawyers consider pot representation a calling. Margolin’s father, defense attorney Bruce Margolin, has advocated for marijuana law reform since the 1960s. She knew by age 12 she wanted to become a lawyer advocating for drug law reform. “My essay for getting into Harvard Law School,” she says, “was on the constitutional right to alter our consciousness.”

Walz joined the niche later in life. His first such case involved securing the release of a jailed AIDS patient who was starving to death. Smoking pot was the only way his client could beat nausea and keep food down—and that was, of course, a jail no-no. “The judge seemed more than willing to let him die,” recalls Walz. “She asked me what assurance I could give her that he wouldn’t continue to violate the law if she let him out.”

After Walz alerted local media, the prosecutor agreed to the prisoner’s release. He died about two years later at his mother’s home.

“I felt very good about what I’d done,” Walz says. “I’d been a criminal defense lawyer for many years and had represented child molesters and people like that. Eventually you’re going to be on your deathbed looking back on your career. I hope to be able to say I made society a better place.”