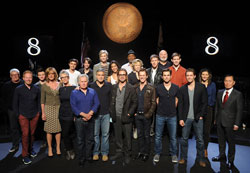 The month of June is often associated with weddings. It’s also the month when the Stonewall riots occurred in 1969 and has become associated with celebrations of gay pride.

To commemorate all that the month of June signifies, LA Theatre Works will be broadcasting a recording of “8” the Play. Written by Academy Award-winning screenwriter Dustin Lance Black, “8” tells the real-life story of two gay couples’ fights to overturn California’s Proposition 8, which banned gay marriage. The play weaves in actual transcripts from Perry v. Schwarzenegger, the case that ultimately overturned Prop 8.

LA Theatre Works’ broadcast of “8” was recorded before a live audience in March. The cast features Brad Pitt, George Clooney and Jane Lynch.

The two-hour broadcast, which is part of LA Theatre Works’ regular radio theater series, also weaves in interviews with the actors, director Rob Reiner, and lawyers David Boies and Ted Olson, who represented the plaintiffs in Perry, says Myke Weiskopf, a radio producer for the theater company.

The audio performance will be streamed over the LA Theatre Works website as well as over many other radio stations.

To find out the exact dates and times of the performance, log on to latw.org.