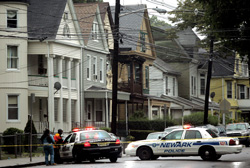 Newark, N.J., is notorious for murders, shootings and muggings, yet there are a few hopeful signs in the judicial system as a new community court is helping nonviolent offenders change their lives.

Newark Community Solutions opened earlier this year in the Newark Municipal Court to promote alternative sentencing—community service coupled with social services instead of jail and fines—to reduce recidivism and increase public trust in the courts.

The court is modeled after the 11-year-old Red Hook Community Justice Center in Brooklyn. Both are led by the nonprofit Center for Court Innovation in New York City, which tests new ideas to strengthen the justice system.

“The visible restitution projects demonstrate to residents that justice is something they can touch and see on a daily basis,” says Greg Berman, director of the Center for Court Innovation. “It’s those guys painting over the graffiti on the corner or cleaning up my local park.”

Newark Community Solutions and the related Newark Youth Court operate with $735,000 annually from government and foundation sources, including the New Jersey State Bar Foundation. The community court’s six-person staff, which includes two social workers, is gearing up to handle 3,500 cases annually. Eligible offenders are those charged with non-violent crimes such as drug possession, prostitution and shoplifting.

“The vast majority of the cases in some way relate to drug involvement,” says project director Jethro Antoine. “Some of the people we see want to change; they’ve hit rock bottom. On the second or third time they’re required to report back to us, oftentimes they’re unrecognizable. It’s a totally different person.”

Antoine holds out a 51-year-old homeless man as an example of the program’s potential for success. The man was arrested on a warrant for $800 in unpaid fines for misdemeanors. Social workers helped him find treatment for substance abuse and mental illness, a home, eyeglasses and dental care. He reports back now voluntarily to share good news, such as reconnecting with his siblings.

“We’re able to observe individuals slowly putting their lives back together while paying back for the harm they’ve done,” Antoine adds. “We do hold them accountable.”