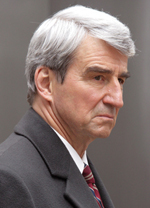 When people have asked about the ways my career as an actor became associated with Lincoln—theater, TV, documentaries, readings and such—I’d say, “If you’re going to get stuck in a role, you could do worse than be typecast as Abraham Lincoln.” That also goes for Jack McCoy.

There are many interesting things about this guy, but maybe the most amazing is that he’s been around so long. And that he’s been allowed to change over time, to weary, to darken, to get older, to change jobs. In a show as plot-driven as Law & Order, what a character’s job is very much influences who the character is. In our show particularly, all narrative all the time, you are what you eat.

McCoy as the assistant district attorney was the man who confronted the villains in court, the man who got the criminals to “face the music,” who ultimately put the bad guys on the spot, where they couldn’t lie their way out, and told us in his summations how to think about it. He also made you want to throw a shoe at him, because he had an uncompromising way of looking at things and used the mighty powers of his office to advance it—in circumstances that were not all black and white. The action required of him each week neatly fit his nature: eager to confront, eager to win, usually insensitive about other opinions, until his nose is rubbed in them. Where Adam Schiff was the careful master, Jack McCoy was always straining the leash. His innate sense of moral outrage and his built-in eagerness to win suited his job.

Then he got promoted. Very much to their credit and my delight, Dick Wolf, Rene Balcer and the rest of the writers—the people who weekly call this fiction that’s Jack McCoy into being—took his whole character with them when they moved him into the head office. And suddenly, here was a character who wasn’t designed for the job.

My favorite show is one in which Schiff, always an opponent of capital punishment, must allow an execution to go forward while his wife is in a coma, sick unto death. The show ends with Schiff at her bedside after she’s been removed from life support, as he waits for her to die. Hill’s face wore all the circumstances and, without saying a word, made the scene real and heartbreaking, the indigestible best done in an intolerable circumstance.

So how was a “merry attack dog” like Jack McCoy going to learn the job of a moral realist? How was a character who’d worn his scorn for politics like a medal going to handle a job where the good that he can do can’t be entirely separate from politics?

What has made this show so durable is that it describes life at work the way we all know it to be, and not just in law offices. This hard-bitten, hard-driving way of working feels real, I think, to plenty of nonlawyers, even in places where co-workers are more inquisitive about what people did over the weekend than any of us at Law & Order ever are.

But we have to regularly remind ourselves and our audiences that we’re just a bunch of fakers. The cases we bring to trial and resolution, in the 40 or so minutes between commercials, would take up a month of Sundays in real life. The tidiness with which TV heroes get to have the last word has nothing at all to do with reality. We tell stories about what’s fair and what’s just so we can get our minds around them, or just get to know them. In reality, conclusions are muddy, there are no final curtains, and life just goes on.

The real-life legal profession and the law itself, at their best, are heroic in ways we can’t touch. We’re just fooling around. Real lawyers, and the crazy quilt of politics, principle and precedent—the real practice of law—do the tough stuff. But fooling around beside the field is fun: watching, from close up, how the pros play the game—and imitating their moves.

Sam Waterston has portrayed the television lawyer Jack McCoy on Law & Order since 1994. Reprinted with permission from Lawyers in Your Living Room! Law on Television, published by the American Bar Association, ABAbooks.org.