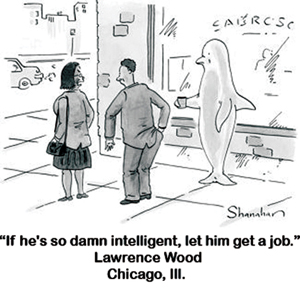 But if you were to coax him past his embarrassment at saying what he’s proudest of, he would concede that apart from family, it’s his success writing cartoon captions for The New Yorker.

The 46-year-old Legal Assistance Foundation attorney established himself in June as a record three-time winner of the magazine’s contest to caption a wordless cartoon featured on its back page. Each week, three finalists are chosen from among thousands of entrants, and readers select a winner by online vote. A competitor since the online contest began in 2005, Wood has won each time he’s made finalist.

So how does he do it?

Writing regimen: “When I come in to work Monday mornings, it’s the first thing I do. I log on and stare at the cartoon for about 10 minutes. Sometimes you think, ‘This is terrific, this has many possibilities,’ but that doesn’t mean you can think of one. Other times you look and think, ‘What the hell?’ Then all of a sudden something will come to you.”

Technique: “You have to keep it brief. You have to figure out who’s speaking. You also have to incorporate everything that’s going on. Many of the cartoons have two distinct situations that are brought together.”

For instance, contest No. 92 in April 2007 featured a panhandling dolphin, a guy reaching into his back pocket and a female companion, who was yelling something. Wood’s winning caption: “If he’s so damn intelligent, let him get a job.”