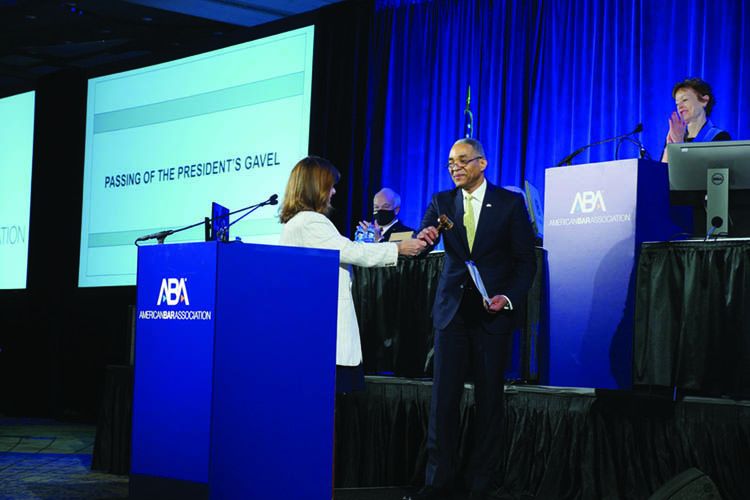 Patricia Lee Refo passes the gavel to Reginald Turner, signaling the transfer of the ABA presidency. Photo courtesy of ABA.

Considering everything that has happened in the past year, the legal profession is much more nimble than it gives itself credit for, Patricia Lee Refo told the House of Delegates at the ABA Hybrid Annual Meeting in August.

“It’s a powerful reminder that when circumstances call on us to do so, we mustn’t be afraid to try new things, to experiment, to learn from experience and to refine where needed,” said Refo, a partner at Snell & Wilmer in Phoenix, who concluded her term as ABA president at the end of the meeting.

Speaking from the Hyatt Regency Chicago, where the in-person events at the meeting were held, Refo added that more needs to be done. “We all know that most civil legal needs in this country—the ‘people law’ needs—go unmet,” Refo said. “So we must sort through what we have learned in this year and a half about the advantages, limitations and pitfalls of remote proceedings and other technologies that hold the promise of expanding access to justice and lowering the cost of legal services.”

“What we do here matters,” Refo told the audience, which participated in person and online. “What we do here makes a difference. And in this pivotal moment in our nation’s history, I am absolutely persuaded that the American Bar Association is needed now more than ever.”

‘Each one, reach one’

In accepting his position as the new president of the American Bar Association, Reginald Turner asked members to reach out and mentor young lawyers and law students, and demonstrate how bar associations can make a positive difference.

Turner’s prior ABA service includes chairing the House of Delegates’ Rules and Calendar Committee from 2016 to 2018 and the Commission on Racial and Ethnic Diversity in the Profession from 2011 to 2014.

The son of a police officer and a library aide, Turner grew up in Detroit, and his speech included memories of the city’s 1967 riot. Afterward, he said, his parents looked for ways for the family to heal, and that included a cultural exchange program called Focus: HOPE, which brought together city and suburban residents to break down racial and economic barriers. The experience led to a significant passion for diversity in his work as a lawyer.

For Deborah Enix-Ross, the new president-elect, civics, civility and collaboration in the profession is more important than ever.

“We face a country divided over many issues, including voting rights, how to address racial inequality and policing communities of color, and attacks on the justice system and the rule of law,” Enix-Ross said in her speech to the House after it voted to approve her nomination.

“With every action we take, we are the ones who can restore confidence in the judicial system, fight for the independence of the judiciary and protect the rule of law,” she said. “We have to do it, we don’t have a choice.”

A senior adviser to the International Dispute Resolution Group at Debevoise & Plimpton, Enix-Ross has chaired the International Law Section, where she also helped recruit women and minorities as the Goal IX Officer and co-founded the Women’s Interest Network.

She also chaired the Section Officers Conference, the Center for Human Rights and the House of Delegates. She served as chair of the House from 2016 to 2018.

Turner will serve as ABA president through the end of the 2022 ABA Annual Meeting, and Enix-Ross will begin her one-year term at that time.

This story was originally published in the October/November 2021 issue of the ABA Journal under the headline: “‘What We Do Here Matters’.”