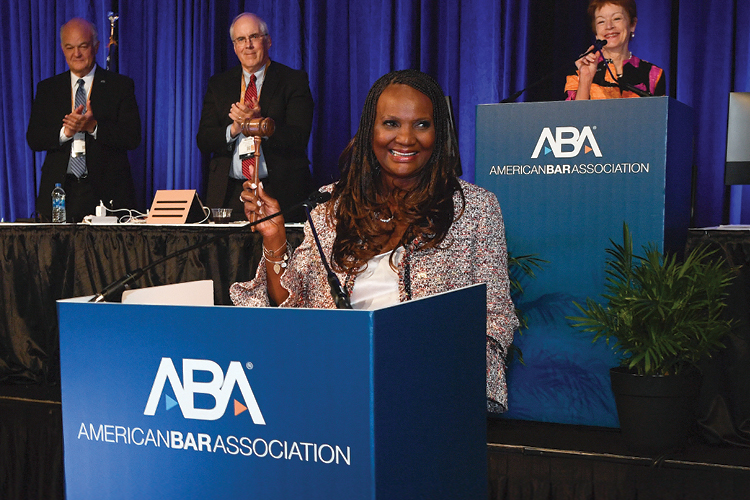 Deborah Enix-Ross talks often about her determination to join the ABA.

After graduating from the University of Miami School of Law in 1981 and passing the bar exam, the native New Yorker spent her graduation money on a flight to San Francisco to attend the association’s 1982 annual meeting. She didn’t know any other members but quickly found her home in the International Law Section.

Since then, Enix-Ross, senior advisor to the International Dispute Resolution Group at Debevoise & Plimpton in New York City, has been chair of the International Law Section, the House of Delegates and the ABA Center for Human Rights.

She became president of the ABA at the close of the annual meeting in August and spoke with the ABA Journal a few weeks later about her plans for her term. The conversation, which has been edited for length, appears below.

What are some of the first things you did after becoming president?

Immediately after leaving Chicago, I went on what I call the “West Coast tour.” I started in Seattle to celebrate Llew Pritchard. Llew has been a longtime member of the ABA and certainly a longtime active member of the Center for Human Rights. It was really an honor to be there, especially as I was a former chair of the center.

Then I went to New Mexico. I was with members of the New Mexico state bar association. They had their annual meeting, and I spoke on civics and civility, the cornerstones of democracy. I also met with the Antitrust Law Section, which was also [meeting] in New Mexico.

Then I went to Los Angeles for the International Legal Ethics Conference. There were representatives from around the world talking about legal ethics, and this is an especially good time to be having that discussion.

I left LA and went down to ProBAR in Texas for four days, looking at our work representing migrants and touring a children’s facility in Harlingen, Texas. And then I finally came home.

For me what was the common thread in all those trips was the depth and breadth of the ABA’s work and the dedication of our volunteers and staff. Because at every stop, you got an insight into the different types of work that we do. It was really a wonderful way to get started.

When you spoke to the House of Delegates, you mentioned that you plan to focus on civics, civility and collaboration. How would you like to do that?

For me, what will be paramount is engaging both within the legal profession and across other professions. I truly believe that for us to advance our knowledge and understanding of civics and civility and why it’s so important as a cornerstone of democracy, we need that collaboration between professions.

For example, within the legal profession it will be paramount to have our state and local and specialty bars all engaged with the ABA. We can use the convening power of the ABA to help promote civics and civility, but it will be those lawyers who are on the ground every day in their communities that will help us have an impact. I have been in touch with a number of state and local bars that have said they want to engage in this work.

And then across professions, I was pleased to kick off the Cornerstones of Democracy project with my alma mater, the University of Miami.

I went to the School of Communication, and there we engaged with the journalism students as well as some prominent UM alums who work in the communications field, including at CNN.

Why do you think those conversations are so important?

The lack of understanding of civics and the lack of civility affects all aspects of our lives. We can see it showing up in the workplace or the school board or courtrooms or in attacks on the judiciary—and not just verbal attacks, but now we see physical attacks and threats on judges.

All of this has an impact on our daily lives, whether you’re a lawyer or not. And unless we can manage to have people understand there are ways to engage that don’t require devolving into some of the chaos we’ve seen, we really are at an inflection point in our society.

You have also mentioned establishing the Law, Society and the Judiciary Task Force with immediate-past ABA President Reginald Turner. What are your goals for the task force?

The task force ties in also to civics and civility, because the task force was created after recent U.S. Supreme Court decisions in New York State Rifle & Pistol Association v. Bruen and Dobbs [v. Jackson Women’s Health Organization]. It came out of the need for the ABA to determine what it could do about these decisions that have this broader impact on society, decisions where it seems like all the world is watching.

Right now, the task force is very new. It’s just gotten started. But in thinking about how to create it, we wanted to be sure there was balance in the members of the task force between Democrats and Republicans, because this is not a political issue. This is a societal issue. The task force needs to be doing its work to make sure we are maintaining a sense of the independence of the judiciary. It needs to educate our nation on what courts do and why judicial independence is critical to the protection of our rights and our institutions and government.

Which of your past experiences with the ABA do you expect to help guide and support you?

It’s the collective experience. I started as a member of a committee in the International Law Section and over time rose to chair the section. Being a section chair, I think, gives you some skills that certainly help when you are president, including the ability to work with people from different backgrounds—and especially in the international section, where our members were not only U.S. lawyers but lawyers from other countries.

And lastly, chairing the House of Delegates, working with [the delegates] and making sure they felt each resolution was thoroughly discussed, debated and the vote in the end was a fair vote. The other part of being chair of the House of Delegates, of course, was it gave me access to being on the Board of Governors. That obviously is important in becoming president.

How would you like to see the association grow and evolve?

I like to think of this in three parts. … We need young lawyers. We need them engaged. We need their perspectives because it’s very different practicing law today than when I started 40 years ago.

We need our senior lawyers. There are a lot of lawyers with tremendous experience who may be at the end of their careers, who may not be practicing full-time, but they still have a lot they can contribute. It’s important that we maintain our senior lawyers, and in fact I think we can go ahead and try to attract new senior lawyers.

The third piece is often overlooked, I believe, and that’s lawyers in their middle careers. These may be lawyers who didn’t start out in the Young Lawyers [Division], so they haven’t grown up in the ABA. I don’t know that we’ve been effective in reaching out to them, but they are a valuable group for us. They’ve been out in their legal careers for a while, and we need their perspective.

So I said three, but actually now that I reflect, there are probably four. The fourth group are what I would call lawyers who may look at the ABA and think we’re too liberal. I don’t think that’s accurate, but I know that’s a perception. What I would do is invite those lawyers to join us to help shape our work and our messaging, and I guarantee what they find is not an association that’s liberal or conservative, but an association that is dedicated to core values and principles, which I would daresay they share as well.

You haven’t been president for that long, but what has been the most fun part of the job so far?

Meeting people is by far the most fun. When I talk about meeting people, it’s lawyers and nonlawyers alike. It is wonderful when you’re introduced as the president of the American Bar Association to see the tremendous respect that people have for the ABA. I also get people who say to me, “You don’t look like a lawyer.” I think that’s especially younger people who are not lawyers who must think of lawyers as stuffy or in other ways. But it’s the reaction. It’s the tremendous opportunity to meet and engage with people that is only afforded to me because of the position and because of the respect for the ABA.

Speaking of fun, what is one thing that most people don’t know about you?

This story was originally published in the December 2022-January 2023 issue of the ABA Journal under the headline: “Core Values: ABA President Deborah Enix-Ross focuses on civics, civility and collaboration.”