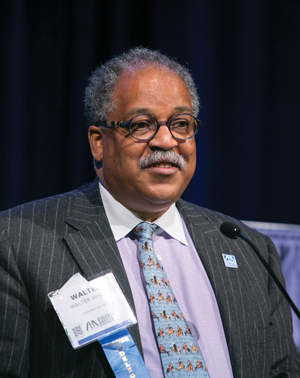 Taking up issues that are currently making national news, the ABA House of Delegates considered capital punishment, stalking and juvenile justice at the 2015 midyear meeting in Houston.

Resolution 108A calls for all governments that use the death penalty—as well as the U.S. military—to require a unanimous jury before imposing such a sentence. Walter H. White Jr. of McGuireWoods in London, who during the meeting received the Robert F. Drinan Award from the Section of Individual Rights and Responsibilities, noted that Alabama, Delaware and Florida require majorities rather than unanimity.

"It is the view of IR and R that a majority decision is not consistent with ABA policy," he said.

Bob Weinberg of George Washington University Law School in Washington, D.C., speaking in support of the resolution, noted that adopting it would permit the ABA to file an amicus brief in the pending U.S. Supreme Court case Glossip v. Gross. In that case, several death penalty defendants from Oklahoma are challenging that state's use of midazolam in lethal injections. The lawsuit argues that the sedative does not properly induce unconsciousness, leading to painful death.

In recent years, the drugs used for lethal injections have become a point of attack by opponents of the death penalty. Some manufacturers have declined to sell their drugs to states, and substitute drugs have been criticized as inhumane. The Supreme Court took Glossip after problems with the executions of Clayton Lockett in Oklahoma, Dennis McGuire in Ohio and Joseph Wood in Arizona drew public attention to the issue. 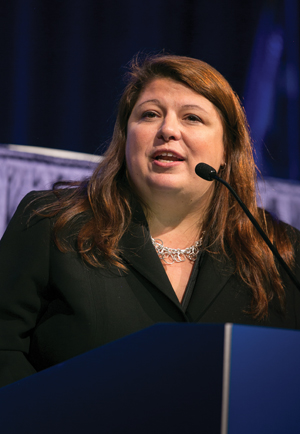 All 50 states allow victims of domestic and sexual violence to get protective orders, Angela C. Vigil told the House. But only 19 states allow the orders when the victim and the perpetrator have no established domestic relationship, she said.

That's despite the fact that 80 to 90 percent of stalkers are not intimate partners, said Vigil, a partner at Baker & McKenzie and chair of the ABA Commission on Domestic and Sexual Violence.

Resolution 109A urges governments to remove the partner requirement, and the House passed it unanimously.

A related measure, Resolution 109B, urges governments to address the housing problems often faced by victims of domestic violence. Those problems include eviction or discrimination for having too many police visits; needing to void or modify a lease agreement entered into with an abuser; and unwarranted disclosure of lease information to an abuser. Vigil said the resolution would support extending the Violence Against Women Act's housing provisions to state law.

"We cannot make [victims] choose between trauma and a roof over their heads," she said.

David English, chair of the Commission on Law and Aging, urged a yes vote, saying domestic and sexual violence are growing problems among older Americans. English is a professor at the University of Missouri School of Law.

Among other issues during the session, delegates debated the ethics and utility of the practice of shackling juvenile offenders in court.

Resolution 107A, urging governments to adopt a presumption against use of these restraints and permit judges to consider the issue after an in-person hearing, ultimately passed.

Stephen Saltzburg, a delegate from the Criminal Justice Section who teaches at the George Washington University Law School, spoke passionately against routine shackling, saying such measures "offend the presumption of innocence."

"It doesn't happen anywhere else in the world that we regard as our equals in provision of justice," he said.

Speaking in opposition—for herself only, she cautioned—was Judge Lee Bussart of Lewisburg, Tennessee. The practice is rare, she said, and mitigates potential risks. And as a general sessions court judge who decides juvenile cases, she said, she has seen that shackling helps young offenders reconsider their behavior.

"I cannot tell you the number of times these juveniles will say to me, 'When I sat in court in those shackles and I was treated as a criminal, I woke up and said this is not who I am and I'm not going to behave in a way that sends me back here,' " she said.

Two more speakers supported the measure. Though nays were audible—one of the few times during the session—the resolution passed.

Passed without opposition was Resolution 107C, also sponsored by the Criminal Justice Section. It urges sentencing laws and procedures that recognize age and maturity as mitigating circumstances for youthful offenders. Part of the resolution called for eliminating "life without the possibility of release or parole for youthful offenders both prospectively and retroactively."

Neal Sonnett, a criminal defense lawyer in Miami, pointed out that the United States "stands alone in permitting life without parole for juveniles."

This article originally appeared in the April 2015 issue of the ABA Journal with this headline: "Criminal Matters: ABA House takes on domestic violence, executions."