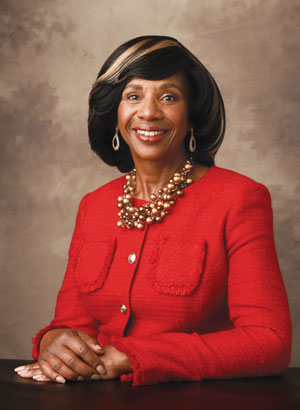 It won’t be a surprise if Paulette Brown chooses to steer clear of airports for a while after wrapping up her term as ABA president at the close of the association’s 2016 annual meeting in early August.

Since her term began in August 2015, Brown has been a road warrior for the ABA and the justice system. Early on, she announced her intention to visit every state at least once while serving as president. She was expected to reach that goal July 27 with a scheduled trip to Utah. In addition, Brown has visited the District of Columbia, Puerto Rico and the Virgin Islands, and she has made 12 international trips to such varied countries as Canada, China, India, Spain and the United Kingdom.

Brown, a partner and co-chair of the Diversity and Inclusion Committee at the Locke Lord law firm in Morristown, New Jersey, has a formula for absorbing all this travel. “I drink lots of water and take my vitamins, and I try to walk as much as possible,” she says. She admits, though, that she would like to get a little more sleep, but there should be more time for naps soon.

In the meantime, there has been nothing flighty about all her travels. Rather, it’s been a key element of the very serious business of serving as ABA president. Being on the ground and meeting directly with lawyers, judges, community organizations, government officials and other constituent groups is one of the best ways to talk about the ABA’s efforts to serve the legal profession and improve the justice system, says Brown, the first black woman to serve as president of the association.

These visits are at the heart of one of Brown’s key presidential initiatives, called Main Street ABA. The Main Street initiative is an outreach effort intended both to serve the association’s members more effectively and to bolster the pipeline into the legal profession for young people who may not have thought a legal career was possible.

For members of the legal community, Brown says, “it’s important to know the ABA cares about them and that it’s for all lawyers, no matter what part of the country they’re in.” And it’s just as important, she says, “to have lawyers understand that their membership in the ABA is extremely valuable.”

Brown has been gratified by “how excited they are that an ABA president—not me, Paulette Brown—has come to see them.” She was the first ABA president to visit Mississippi in more than two decades and the first one to visit Portland, Oregon.

Her travels have been personally beneficial, as well. “I’ve learned so much from interacting with people from around the country,” she says. “When you hear other people’s perspectives, lightbulbs go off and you develop new ideas.”

Brown’s itinerary for a trip to Columbia, South Carolina, in late 2015 was typical. Over a day and a half, she participated in 13 separate events, including a CLE program at a local law firm, an event at the University of South Carolina School of Law, sessions with representatives of local and state bars, meetings with members of the state’s women’s bar association, visits with the current and incoming chief justices of the South Carolina Supreme Court, and a meeting with the local Boys & Girls Club.

Meeting the young women and men who belong to the clubs is a staple of Brown’s agenda on her trips, and for good reasons. “First, there are Boys & Girls Clubs everywhere,” she says. “There was even one in St. Croix in the Virgin Islands and one in Missoula, Montana.

“Secondly, the organization is about providing a safe place for young people to reach their full potential. That’s what I’m trying to accomplish with my visits—to show these incredible and curious young people that there are opportunities. I would like to provide them with exposure I did not have. Sometimes just by them seeing the possibilities, it opens a window they had not previously considered. We have an obligation to pay it forward.”

Like her predecessors, Brown has faced the challenge of maintaining a focus on her key initiatives while also responding to breaking events that inevitably come up during the year. “There are always issues that will arise and require attention,” says Brown. “The unexpected death of Supreme Court Justice Antonin Scalia was certainly one of the most significant.”

In a statement issued shortly after Scalia died, Brown said, “In his 30 years on the Supreme Court, he made an indelible mark on American law and jurisprudence. His great intellect, dedication and service to the nation, the law and the American Bar Association will be missed.” Scalia served as chair of the Section of Administrative Law (now the Section of Administrative Law and Regulatory Practice).

On June 21, the ABA Standing Committee on the Federal Judiciary issued an evaluation that found Merrick B. Garland, President Barack Obama’s nominee to replace Scalia, to be “well-qualified.” The report stated that Garland, the chief judge of the U.S. Court of Appeals for the District of Columbia Circuit, “meets the very highest standards of integrity, professional competence and judicial temperament.”

In a statement issued in conjunction with the committee’s evaluation, Brown said, “It is now imperative that the Senate fulfills its constitutional responsibilities to consider and act promptly on the Supreme Court nominee.” Garland’s nomination has been held up in the Senate by Republicans who say Scalia’s potential replacement should be nominated by the new president after the November election. But, she said, “to be fully effective and to ensure the highest level of access to justice, the Supreme Court needs a full complement of nine justices. While the court continues to function, its 4-4 decisions do not establish precedent and leave open questions on issues that are vital to the lives of everyday people.”

While breaking events have demanded Brown’s attention, “I am pleased that I have been able to deal with the unexpected while I have tried to stay true to my promises at the beginning of my term and remained determined to put forth and enact my initiatives.” Those initiatives include an ABA Day of Service on Oct. 30 to highlight the importance of pro bono work by lawyers, and ABA Everyday, which offers a free membership benefit during each day of Brown’s term.

At the heart of Brown’s agenda is the need to promote full and equal diversity and inclusion in the legal profession and the justice system, which is stated as Goal III of the ABA’s four core goals: Eliminate bias and enhance diversity.

At the start of her term, Brown appointed the Diversity and Inclusion 360 Commission to coordinate efforts to meet this goal. The commission’s work includes identifying how the ABA and its entities address diversity and inclusion, as well as sharing those approaches with other bar associations and legal organizations; developing training materials for judges, prosecutors and public defenders; determining how to build a more effective pipeline to law schools that will increase diversity; and finding ways to increase financial support for lawyers of color and others who have been traditionally outside the mainstream of the profession.

A key to effectively addressing this issue is to recognize the role of implicit bias, Brown says. She describes implicit bias as “bias we’ve learned over a period of time but that we don’t really know about.” As a result, “we make certain assumptions based on what we’ve been programmed for. It can be very subtle.” She remembers, for instance, “watching TV as a kid, and the bad guys always rode black horses, and the good guys white. None of us are exempt from having biases. I have them. The key is to understand their importance and how they affect us. Biases are manifested in people’s actions.”

It’s also important to understand the difference between diversity and inclusion, says Brown. Diversity often is measured in numbers, while inclusion relates to whether a person feels welcome in an organization. “It’s not enough to have people in the room,” she says. “They’ve got to feel they’re part of the fabric of the organization. You can’t have real diversity without inclusion.”

In February, the ABA House of Delegates approved a resolution by the Diversity and Inclusion 360 Commission encouraging states to modify their mandatory or minimum CLE requirements to include “programs regarding diversity and inclusion in the legal profession of all persons regardless of race, ethnicity, gender, sexual orientation, gender identity or disabilities, and programs regarding the elimination of bias.”

Brown says it is significant that, come August, for the first time in the ABA’s history every officer of the association will be female, including two black women and a Native American woman. “It demonstrates that the ABA leads by example,” she says. “Over the course of time, women and women of color, in particular, have not always been given the same opportunities as others. They still lag behind when it comes to retention, leadership roles and compensation. This new group of leaders provides a framework for the possibilities for the legal profession. It is hopeful that what has occurred within the ABA will transcend throughout the rest of the legal profession, and at an accelerated pace.”

This article originally appeared in the August 2016 issue of the ABA Journal with this headline: “Eyes on the Prize: In a challenging balancing act, ABA President Paulette Brown addresses breaking events while maintaining her focus on key initiatives.”