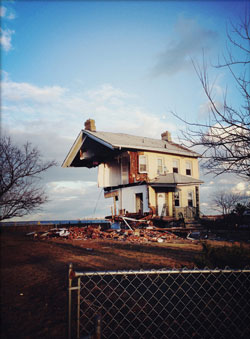 After a massive storm slammed into the New York City region on Oct. 29, 2012, the area “was like the Third World,” says Jay H. Bernstein, a partner at Kirsch, Gelband & Stone in Newark, N.J. There was no gasoline at local service stations, cellphones didn’t work, electrical power was out, “so basically you were trapped wherever you were.”

And in the absence of immediate government assistance, says Bernstein—a founding member of the Mass Disaster Response Program operated by the New Jersey State Bar Association to help address victims’ legal needs—residents’ impromptu efforts to respond to the disaster created some interesting alliances.

“People trapped in buildings were being helped by motorcycle gangs and veterans groups,” says Bernstein, who was reminded of stories his mother told him about neighborhood civil defense programs during World War II, in which “every block made sure every person was taken care of, and people checked on each other.”

The size and destructiveness of the storm qualified it for a special (if not official) designation. Superstorm Sandy joined a late-season tropical hurricane that swept north up the East Coast with a classic nor’easter charging south off the Atlantic to create the second-costliest storm in U.S. history, surpassed only by Hurricane Katrina in 2005.

Sandy killed more than 250 people from the Caribbean to Canada and caused at least $65 billion in damages. In the storm’s wake, some 8.1 million homes were without power in 17 states, in some cases for weeks.

Bernstein says the volume of calls flowing into a hotline maintained by the New Jersey bar illustrates the massive need for legal assistance after a disaster like Sandy. Issues included employment matters, lost documents, contractor disputes and even cases in which homeowners were denied emergency assistance because they were behind on their mortgage payments. Lawyers, he says, can be effective in “breaking through the bureaucracy” for victims.

Superstorm Sandy also prompted the ABA to marshal its own resources, including some new mechanisms and policies that were adopted after Katrina revealed gaps in the legal profession’s preparedness for and response to disasters of all kinds.

“We always had a disaster relief committee, and when people have needed legal services we’ve always been there, but we really never had a planned disaster relief program,” says ABA President Laurel G. Bellows. “Katrina pointed out the depths of the need, … so post-Katrina we launched a pro bono task force. The ABA has put its money where its mouth is by advocating for funding, and also through the development of a tool teaching lawyers, bar associations and local justice systems how to prepare for and respond to disasters,” says the principal of the Bellows Law Group in Chicago.

The ABA’s disaster preparedness and response strategy has two primary goals: first, helping to provide emergency legal services to affected individuals and businesses; and second, helping lawyers prepare for and respond to disasters.

Two policies adopted by the ABA House of Delegates in recent years put a stronger focus on both those goals. In 2009, the House adopted a recommendation (PDF) that the ABA urge federal, state and local governments to provide more funding to nonprofit legal services providers, bar associations and pro bono programs to help address the unmet legal needs of low-income residents of communities affected by disasters. The lead sponsor was the Standing Committee on Pro Bono and Public Service.

And in 2011, the House adopted a resolution (PDF) urging lawyers “to reg­­u­larly assess their practice environment to identify and address risks that arise from any natural or manmade disaster that may compromise their ability to diligently and competently protect their clients’ interests, and maintain the security of their clients’ property.” That resolution was sponsored by the Special Committee on Disaster Response and Preparedness.

Almost immediately after Sandy struck, the Disaster Legal Services Program operated by the ABA’s Young Lawyers Division kicked in. The program operates under a memorandum of understanding between the division and the Federal Emergency Management Agency that dates back to 1978. Under the agreement, the YLD provides pro bono disaster legal services to low-income survivors of a federally declared disaster when FEMA requests it do so. Since September 2007, the YLD has responded to 103 disasters in 37 states.

The division coordinates volunteer lawyers working toll-free hotlines. Questions from disaster victims may be answered by hotline volunteers or referred to pro bono attorneys in the appropriate jurisdiction. Through the end of December, program volunteers had fielded some 2,500 calls.

“The Young Lawyers Division has really strong relationships with the state bars and works closely with state bar young lawyers committees,” says Christopher A. Rogers, chair of the YLD and an associate at Haynes and Boone in Dallas. “This has made it more efficient as far as the training for setting up a local hotline. We’re lucky enough to have a structure set up to make pro bono lawyers available when disaster strikes.”

In 2007, the House adopted another policy aimed at making it easier for the profession to provide emergency assistance to disaster victims. The Model Court Rule on Provision of Legal Services Following Determination of Major Disaster (PDF)—the “Katrina rule” for short—permits out-of-state lawyers to provide pro bono legal services when a disaster affects the local justice system. At least 11 states have adopted the model rule.

The ABA also is a participating organization in the National Disaster Legal Aid website, which provides information for lawyers wanting to volunteer or donate to legal aid programs, and serves as a resource for individuals seeking legal assistance in the aftermath of a disaster.

Since Katrina, the ABA has put more emphasis on helping lawyers prepare for and respond to disasters that can affect their practices. In 2011, for instance, the Tort Trial and Insurance Practice Section introduced its Initiative on Disaster Preparedness and Response. Spearheaded by Randy J. Aliment, who was then section chair, the initiative provides podcasts, teleconferences and live programs to address issues such as preparedness, recovery and response, risk management, liability, insurance, claims and litigation.

“During my year as chair, the theme was a series of programs on disasters: cyberterrorism, negligence, acts of nature and domestic acts of terrorism,” says Aliment, a partner at Williams Kastner in Seattle. “The initiative started with 20 webinars dealing with the fallout of disasters, insurance coverage, regulatory [procedures], wrongful death. And then came the incredible, horrific events in Japan, the twisters in the U.S. and Sandy, and we wondered: ‘Did we jinx the country?’ ”

Aliment says lessons learned about disaster preparedness and response really paid off in preventing what could have been worse damage from Sandy. “With the advance warning systems, we know some businesses took actions, like placing generators up higher in the building so they wouldn’t be flooded in the basement,” he says.

In addition, the ABA maintains an online library of sample disaster plans, as well as information on safeguarding records and serving clients and the public—both before and after disaster strikes. The Law Practice Management Section offers a free webzine that focuses on emergency preparedness and response. Also, ABA members receive a discount on the services of Agility Recovery, whose experts work with lawyers to develop disaster plans and—should disaster strike—help law firms get back up and running. The ABA also has produced a book, A Lawyer’s Guide to Disaster Planning, and a video, Surviving a Disaster: Are You Prepared? Both products may be ordered through ABA Publishing.

The ABA also has taken steps to prepare itself to respond effectively to disasters. In October, the association became the first not-for-profit in the United States to be certified under the Voluntary Private Sector Preparedness Program, or PS-Prep, approved by the Department of Homeland Security. The ABA is only the second U.S. business entity of any kind to receive this distinction.

“Our nearly 400,000 members and the public can rest assured that the ABA can recover from a severe business interruption and continue to serve their needs,” Bellows said in a statement issued in conjunction with the announcement. “The organizational resilience that disaster preparedness provides is critical in an increasingly unpredictable environment of global terrorism and frequent natural disasters.”

While the recent focus has been on natural disasters, Bellows also wants the ABA to prepare for technological disasters in the form of cyberattacks on government agencies and private businesses, including law firms.

At the start of her term in August, Bellows appointed the Cybersecurity Legal Task Force to address this next frontier in disaster preparedness. “The Cybersecurity Legal Task Force is a huge initiative working on many different levels,” Bellows says. “Among other issues, we are focusing on how to protect clients’ secrets by keeping law firms from getting hacked, or keeping the hacker from going through law firms to get clients’ information.”