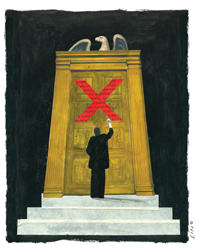 The U.S. Supreme Court under Chief Justice John G. Roberts Jr. has been sending a message to lawyers who want to challenge state laws as unconstitutional. It goes like this: Show us the proof. Be specific. And if you want us to throw out an entire law because it may infringe the rights of a few people, you may be wasting your time.

In a series of rulings during the past two years, the court has rejected broad challenges to new laws while at the same time leaving open the door to a more targeted attack on some of the laws’ provisions.

In Crawford v. Marion County Election Board (PDF), decided April 28, the court rejected by a 6-3 margin a facial attack on an Indiana law that requires voters to have current, gov­ern­ment-issued photo iden­tification when they go to the polls.

The American Civil Liberties Union and the Indiana Democratic Party sued in 2005 to have the law voided on the grounds that it would severely burden the right to vote for those who are indigent, disabled, elderly or minorities. But the lawyers did not name a single plaintiff who had been deterred from voting because of the requirement.

“Given the fact that [the plaintiffs] have advanced a broad attack … seeking relief that would invalidate the statute in all its applications, they bear a heavy burden of persuasion,” wrote Justice John Paul Stevens.

Moreover, “a facial challenge must fail where the statute has a plainly legitimate sweep,” he said, and com­bating voter fraud is a legitimate goal. The challengers may well be able to show that the photo ID rule puts a barrier before indigent people who do not drive a car and cannot easily obtain a birth cer­tificate, the court said, but they failed to prove it in this litigation.

In a little-noticed opinion decided a month earlier, on March 18, Washington State Grange v. Washington State Repub­lican Party (PDF), the court revived a state law that puts on the autumn ballot the top two vote-get­ters in the primary election, regardless of their party affiliation.

The candidates may designate themselves as Repub­lican or Democrat, even though they are not the official nominee of the party. The state Re­pub­li­can Party sued to challenge the law as violating its “associational rights,” and it was struck down on its face by the 9th U.S. Circuit Court of Appeals at San Francisco.

But in a 7-2 opinion that was written by Justice Clarence Thomas, the court rejected this facial attack and said it rested on “speculation” about the law’s impact.

In between, on April 16, the court rejected in Baze v. Rees (PDF) a broad challenge to the use of lethal injections in a Kentucky case.

Roberts said an exe­cution method would amount to unconstitutional cruel and unusual punishment if it posed an intolerable risk of causing severe pain. But in Kentucky, where no exe­cution had been carried out in a decade, challengers failed to prove there was such a risk. Moreover, its prison team had adopted procedures to ensure that a condemned inmate was unconscious before the heart-stopping drug was administered.

The national legal director of the American Civil Liberties Union says the opinions signal a basic shift in litigating constitutional claims. “It’s important to understand this is a fundamental departure from what the court has done over the past four decades to protect civil and constitutional rights,” says Steven R. Shapiro of New York City.

As a point of comparison, he cites Harper v. Virginia Board of Elections, the 1966 decision that struck down the poll tax.

“The court in Harper didn’t say, ‘Bring us someone who cannot afford $1.50 and we will strike down the law as applied to those persons.’ They struck down the law on its face because it was about suppressing votes, not about protecting the integrity of the elections,” Shapiro says.

Shapiro also says it was unclear what could be won through an as-applied challenge. He cites a news report about 12 nuns being turned away from voting in the Indiana primary shortly after the court’s ruling.

“Suppose you go to court on behalf of the 12 nuns, and let’s assume you win,” he says. “What’s the remedy? If it is to count the votes of those 12 nuns, that is good. But it does nothing at all to deal with the broader problems created by the law.”

The Supreme Court’s skepticism toward broad challenges figures to have an important impact in the area of abortion. In Gonzales v. Carhart (PDF), which was decided last year, the court rejected a facial challenge to the federal Partial-Birth Abortion Ban Act, which prohib­its a rarely used abortion procedure known medically as “intact dilation and extraction.”

The opinion, however, left the door open for doc­tors to go back to court “if it can be shown that in discrete and well-defined instances a particular [medical] condition” requires the use of the banned abortion method. So far, abortion-rights advocates have not filed such a suit.

Before that ruling, the court had tended to strike down abortion statutes on their face if they were likely to infringe the rights of some women. For example, in a 1992 opinion, Planned Parenthood of Southeastern Penn­­sylvania v. Casey (PDF), the court threw out part of a state law that required married women to notify their spouses before having an abortion.

While most women would speak to their husbands in such situations, Justice Sandra Day O’Connor said, the law would put a severe burden on the rights of at least some women in the future.

Casey figured in the confirmation hearing of Justice Samuel A. Alito Jr. As a judge on the 3rd U.S. Circuit Court of Appeals at Philadelphia, he had written an opinion saying this provision should be upheld. O’Connor disagreed when the issue reached the Supreme Court. In 2006, Alito replaced O’Connor.

“There’s real uncertainty about where the court is going” with the move toward as-applied challenges, says law professor Vikram Amar of the University of California at Davis. “They have not worked out the contours of this doctrine.”

It is not clear, for example, whether lawyers must have a plaintiff who has suffered real harm before a new measure can be challenged as unconstitutional.

For example, would lawyers need a plaintiff who ex­perienced severe bleeding or a life-threatening infection during some more common abortion procedure to prove that the ban on IDE abortions threatens the health of women in general?

Conversely, the roberts court has shown that an as-applied challenge can be a winner—at least in some sit­uations. In 2003 the justices upheld the Bipartisan Campaign Reform Act (known as the McCain-Feingold Act) on its face, including a provision that barred groups from using corporate money to pay for pre-election broadcast ads that mention the name of a candidate.

When Alito replaced O’Connor, the Supreme Court had a new majority of justices who viewed the campaign-finance laws as free-speech violations. And last year, in Federal Election Commission v. Wisconsin Right to Life (PDF), they proved willing to carve out an exception to the McCain-Feingold Act.

In a 5-4 decision, the high court ruled in favor of an anti-abortion group that wanted to use corporate funds to pay for radio advertisements encouraging lawmakers—including Sen. Russ Feingold, D-Wis.—to support President Bush’s judicial nominees. The court said the group deserved an exemption from the law because its ads were not electioneering messages and because the group had a free-speech right to lobby its legislators.

In the wake of the Indiana ruling, some legal experts urge advocates to rethink their strat­egy. “Think long and hard before seeking Su­preme Court review,” says Ohio State University law professor Daniel Tokaji. The plaintiffs lawyers “put together a pretty weak case” to challenge the photo ID rule, he says, since they did not have a reg­istered voter who was blocked from casting a ballot because of the rule.

The same might be said of the challenge to the use of lethal injections. Capital defense lawyers had sought a ruling that would bar the use of lethal injections nationwide because the three-chemical compound was suspected of both causing and masking intense pain. The theory was that a paralyzing drug left the condemned man unable to respond when a heart-stopping chemical seared through his veins. But, as with the Indiana case, the defense lawyers offered no evi­­dence Kentucky had carried out a botched or painful execution.