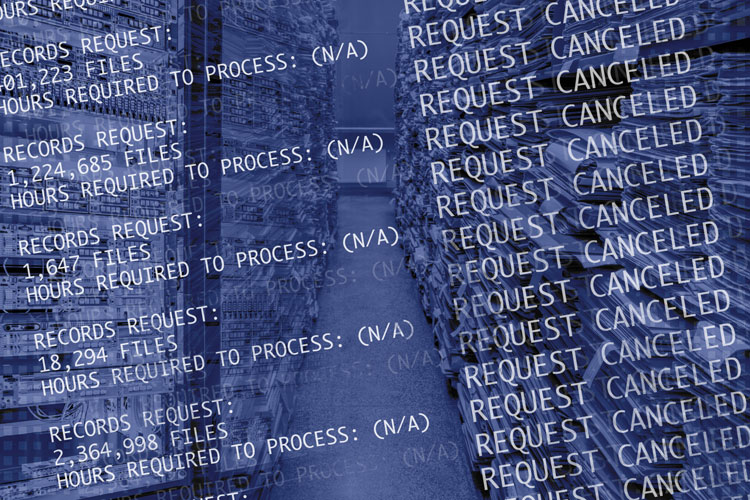 In 2015, a government official in Snohomish County, Washington, received an email from a “Mr. Public Requestor,” seeking all public records of any kind from all county-owned smartphones.

Despite the breadth of this extraordinary request, the anonymity of the person who sent it, and its lack of an obvious purpose, the county couldn’t turn it away. Under Washington’s Public Records Act, none of those factors invalidates such a request. Gage Andrews, then the county’s public records officer, estimated it would take 12,000 hours to download and make the necessary redactions.

But 935 hours into fulfilling that request, the requester canceled without explanation. Because the law doesn’t permit Snohomish County to charge for lost staff time, it was out about $30,000.

Such stories have played out all across Washington in the past decade. According to a 2016 report from the state auditor’s office, the cost of filling public records requests went up 70 percent between 2011 and mid-2015, driven by increases in the number and complexity of requests. They came from companies, nonprofits, law firms, the media and individuals. That’s why the state legislature passed two reform bills last year.

“We just hope that that is at least a deterrent to some of these—I call them vexatious, vindictive requesters,” says state Rep. Terry Nealey, a Republican from eastern Washington who sponsored one of the bills. “That was really the goal of mine all along—was to try to prevent them from gumming up the works.”

Public records laws—state law analogues to the federal Freedom of Information Act—are intended to allow citizens to keep tabs on their governments and can expose wrongdoing, mismanagement, reckless spending, even scandal. But they also can be abused—and not just in Washington.

After a few people in Florida started to use public records laws to generate quick settlements, the state legislature passed reforms in 2017. And university professors whose research touches on controversial topics such as climate change have been mired in litigation regarding politically motivated records requests.

Some attorneys love freedom of information laws; the Washington auditor’s report says law firms make more Public Records Act requests than the media. But government lawyers might be less enthusiastic. Chuck Thompson, executive director and general counsel of the International Municipal Lawyers Association, says one problem for his members is that many states (including Washington) don’t allow agencies to recover the cost of staff time, which is the bulk of their costs.

Another problem is that the Washington Public Records Act was written in the 1970s. The original law suggested standard charges for the cost of photocopies but did not contemplate electronic copies. As a result, Nealey says, many municipalities simply didn’t charge for electronic copies.

That had bad results. One Seattle man, Tim Clemans, asked in 2015 for all state agencies’ emails, on all subjects and from all dates, via the internet at no charge. His request was denied because it did not specify identifiable records and seemed to be an attempt to change state policy on email. Clemans said his plan was to make an enormous online database of public information or motivate agencies to do that.

Print and initial online versions of "Reckless Requests," March 2018, should have stated that the Washington state legislature study group decided to charge 1.25 cents for electronic copies, so a requester who asked for 10,000 files would pay $125.

This article was published in the March 2018 issue of the ABA Journal with the title "Reckless Requests: Public records laws are meant to shine light on the dark side of government, but they may be abused."