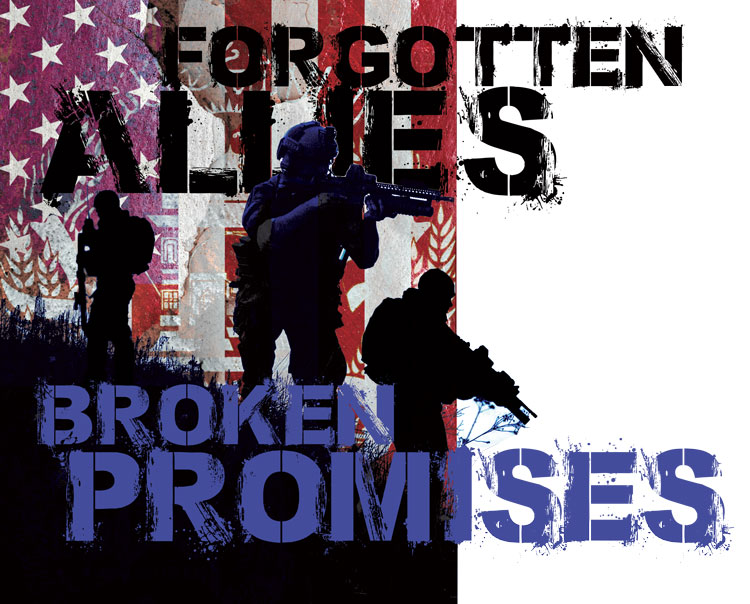 In a sense, Qismat Amin’s high school English has served him well. In another sense, it nearly got him killed.

When the U.S. Army came to Afghanistan, Amin—then 19 years old—was hired as an interpreter. He spent three years, from 2010 to 2013, helping American soldiers communicate with locals in eastern Afghanistan’s rural Shinwari district, where his family has roots.

But after the Americans left, the Taliban moved back in and threatened to kill people who had worked for the United States. So in late 2012, Amin applied for a special immigrant visa under a program for Afghans and Iraqis whose lives are threatened because they’ve worked with the U.S. The intent is to resettle them out of danger, and recipients are granted lawful permanent residency (green cards) on arrival.

“Every time when I email[ed] the embassy, they [told] me, ‘Sir, your visa status is in administrative processing, and you have to wait,’”  Amin says.

Meanwhile, the Islamic State group had moved into eastern Afghanistan—and its members didn’t like American collaborators any more than the Taliban did. One night, they broke down the door of some of Amin’s relatives in the Shinwari district, looking for him. They didn’t find him, but they stole all of his family’s crops.

“They said, ‘We can give them back if he gets back and talks to us and tells us: Hey, I’m not working for America anymore,’” says Amin. “But ... obviously this is like a trap, and they just wanted me to come over and kill me.”

By then, Amin was living in the city of Jalalabad—hiding. He lived in constant fear that he’d be recognized and killed. He was afraid, he says, “every second of my life.”

Amin’s predicament alarmed former U.S. Army Capt. Matthew Ball, who had worked with the interpreter while deployed to the Shinwari district. In the fall of 2015, when Amin’s application had beenpending for nearly three years, Ball was done with active duty (he still serves in the Army Reserve) and entering Stanford Law School. There, he got in touch with the Stanford chapter of the International Refugee Assistance Project, which mobilizes law students and lawyers to help refugees, including SIV applicants. With IRAP’s help, he organized his fellow students to write to their congressional representatives, asking them to intervene in Amin’s case. When that went nowhere, Ball contacted the media.

Ball still isn’t sure whether any of it helped. But last fall, Amin’s application began moving through the system again. On Feb. 8—more than four years after he applied for the SIV program—he landed at San Francisco International Airport. Ball and a group of Stanford Law students were there to greet him. Shortly after arriving, Amin was living with Ball and his wife in the Bay Area and making plans for graduate school.

The lengthy delays Amin experienced are not uncommon, says Ball, who’s heard from a lot of veterans concerned about their own interpreters. In fact, the U.S. Department of State says 9,562 Afghans and 248 Iraqis had pending applications somewhere in the SIV process as of Dec. 31, 2016.

According to the State Department, the average government processing time for Afghan applicants was 480 days as of April. That’s up from 270 days the previous year. For Iraqis, the average wait time as of April was 305 days, up from 269 a year ago. By far the longest step was the security checks, called “administrative processing” by State and “a bureaucratic black hole” by Ball. Though security checks are an essential part of the process, advocates for SIV applicants say they can stretch out for years, putting applicants’ lives in danger.

Those delays aren’t the only problem. There aren’t enough visas allocated for all of the applicants from Afghanistan, so the government stopped scheduling visa interviews in March. A congressional bill to add more visas was sent to committees that same month. Because Congress must renew the program every few years, it can be—and has been—used as a political bargaining chip, despite the life-or-death stakes.

The primary Iraqi SIV program has expired, though it’s still granting visas allocated in prior years.

And this year, the situation has been further complicated by President Donald J. Trump’s executive orders banning admission of travelers from certain Muslim-majority countries. One of the first people to be caught in the original travel ban was an Iraqi SIV holder. That caused an outcry, and SIV holders were exempted within a week.

Nonetheless, there have been at least two incidents in which SIV holders from Afghanistan, whose nationals were never banned, were put into deportation immediately upon arrival in the U.S. 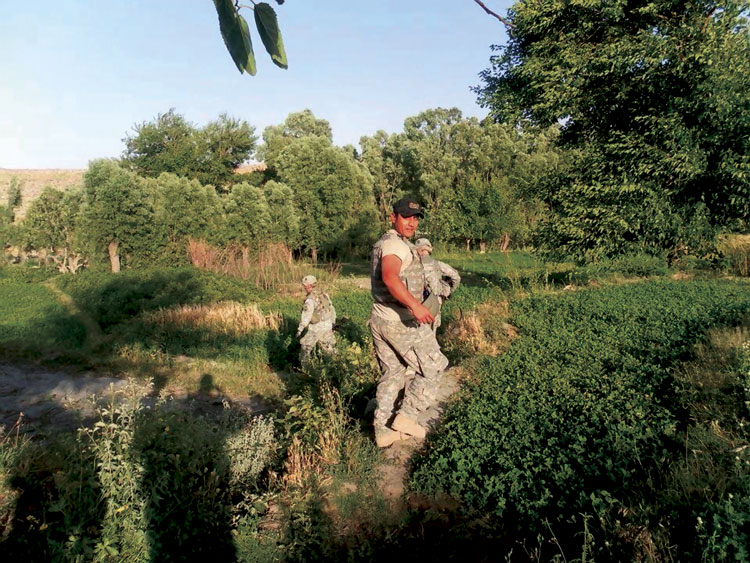 In 2010, Qismat Amin was an interpreter with the U.S. Army in Afghanistan. Later, the Taliban and the Islamic State group threatened him for working with the U.S., and he was afraid “every second of my life.” Photo of Qismat Amin in the field by Matthew Ball.

MEDDLING WITH THE MILITARY

All of this jeopardizes not only individual SIV applicants—and their families—but also the goals of the U.S. military, advocates say.

The death threats are very real. Betsy Fisher, policy director for IRAP, says she’s worked with clients whose immediate family members were kidnapped and killed in retaliation for their work with the United States. Often, she says, this was done because the extremists—generally the Taliban, Islamic State group, al-Qaida or local militias—couldn’t get to the employees themselves, who were living on U.S. military bases.

“I think assassination of family members is extremely common,” Fisher says. “But ... if the military presence there is downsized and you’re out of a job, you don’t have a military base to live on anymore.”

As a result, she says, many SIV applicants move to another city within their home countries, or sometimes to another country. Stories of self-imposed house arrest, like Amin’s, are not unusual.

In 2006, after this problem came to light, Congress passed the first SIV program, which provides 50 visas per year to interpreters from either Iraq or Afghanistan, plus their immediate families. (Families don’t count toward the visa limits in SIV programs.) The program has no end date, but it’s very small.

Congress added two SIV programs later, which offer more visas but on a temporary basis. The Afghan Allies Protection Act of 2009, which expires in 2020, currently authorizes 8,500 visas for Afghans who had worked for or on behalf of the United States in any capacity. Similarly, the Refugee Crisis in Iraq Act authorized 2,500 visas for Iraqis. It expired Sept. 30, 2014, but applicants who’d taken the first step before that date are still being processed.

Print and initial online versions of “Forgotten Allies, Broken Promises,” September, should have stated that Afghans may apply for special immigrant visas even after all available SIVs have been awarded, but the State Department will not schedule interviews until more become available. It also should have reported that President Donald Trump's executive order blocks Iraqi nationals from entering the United States as refugees.


This article was first published in the September 2017 ABA Journal magazine with the headline "Forgotten Allies, Broken Promises."