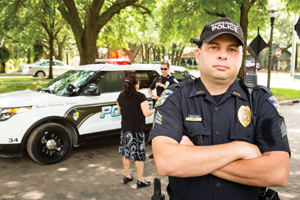 In the central Florida town of Windermere, population 3,000, its 10 patrol officers began wearing cameras in the autumn of 2013 to rebuild trust. The former chief, Daniel Saylor, had been arrested on perjury charges for providing false testimony during the sexual battery trial of a friend. Last year he was found guilty and sentenced to eight years in prison.

Because of Saylor’s conviction, and a previous investigation during his tenure, the department suffered from a reputation of being corrupt.

“The agency was tarnished with all the old baggage, and we needed to get that trust back,” says Deputy Chief Jennifer Treadwell. “Some of the officers conducted traffic stops and people would say, ‘I know about you guys.’ “

Though its population is small, Windermere police are busy with traffic stops, as the town’s roads are heavily traveled by cars going to and from Disney World. Each day 17,000 to 20,000 cars pass through town.

“One of the biggest complaints you get is rudeness,” Treadwell says. “Our chief believes in being transparent. We want the public to see what we’re doing. It’s restoring trust.”

Assuring that the public sees what officers are doing means making videos available if requested, and Florida’s “sunshine laws” are among the most liberal in the country when it comes to access of public information.

As police departments across the country join the growing movement to equip officers with body-worn cameras, they’re finding a need to better understand the implications of the technology and the tricky legal questions that come with it.

“After Ferguson, I kept seeing the demand from the public for the cameras. The level of interest has gone up tenfold,” says Leonard J. Dietzen, a Tallahassee attorney who represents police departments throughout Florida and counsels them on use of the cameras. “People are jumping into this without studying the issues.”

Ferguson, Missouri, is where the now infamous police shooting of unarmed black teen Michael Brown stirred up allegations of police misconduct and a pattern of racism with-in the department. That incident, and another in North Charleston, South Carolina, in which Walter Scott, an unarmed black man, died after being shot in the back while fleeing, prompted public outcry for greater police accountability. President Barack Obama called for 50,000 body cameras to be issued to police.

But Dietzen cautions police departments to weigh the benefits against the possible downsides of using body-worn cameras. “It’s not a magic bullet,” he says, “but a useful tool.”

For police, the plus side is that cameras can improve how officers capture evidence. The cameras can also provide a record of interrogations and arrests, how officers conduct themselves and what they witness at crime scenes.

But strapping on the cameras raises questions, such as when should officers turn them on and off? There are concerns about privacy rights, public access to the recordings, and police department monitoring of their use and preventing them from being edited or destroyed.

“There will always be questions about whether the [camera] was on at the appropriate moment,” says Norman Pattis, a New Haven, Connecticut-based civil rights and criminal defense attorney who has represented clients in police misconduct cases. The frontier of litigation, he says, could shift from what’s been recorded to what has not, and then there will be claims that recordings were tampered with.

On the other side, it may weed out meritless claims. “We will often get calls from people who say they were victims of excessive force, and from the officer’s perspective it was a routine arrest,” Pattis says. “They had to put the person on the ground, they had to handcuff them, there might have been a little pushing and shoving. In a normal context that might look like an assault, but it may just be a routine arrest.”

Recordings of incidents will help answer those questions. “It eliminates the ‘he said, she said,’ and it will be easier for police to defend their conduct in the routine case,” Pattis says.

Without cameras, officers can write their narratives as they see fit. “Police officers, often when they are writing their reports, write how they wish they had behaved rather than, in fact, how they behaved, so real-time recordings will help defendants,” Pattis says. “I think the camera will highlight the clash between what the public thinks is reasonable and courts permit the police officers to do.”

Ameer Benno, a former assistant district attorney in Manhattan and now a criminal defense lawyer, also has represented clients accusing police of misconduct, but New York has no immediate plans for body cams. “I think it would have a significant impact,” Benno says. “If it works properly, it will be a vital tool. The old adage that a picture is worth 1,000 words—it tells the story.”

Among the organizations that support the use of body cams is the American Civil Liberties Union. Given its past objections to the use of surveillance cameras, this is an unusual position. “But we’re not just a privacy organization,” says Jay Stanley, an ACLU policy analyst based in Washington, D.C. “We’re also a civil rights organization and a criminal justice reform organization.” Stanley says police departments using cameras must set parameters that prevent officers from choosing what to record or not, and under what circumstances. “We’re very afraid that police won’t have the right oversight. Let’s not let any shenanigans happen,” he says. “If justice is served, that’s fine. But we’re also interested in uncovering injustice.”

For many police departments, early indications are that body cams are having a positive impact. In Rialto, California, two years before Ferguson, Chief William Farrar launched a pilot program to see whether cameras would have an effect on use-of-force complaints. The department saw a 60 percent reduction in officer use-of-force incidents and an 88 percent reduction in the number of citizen complaints.

Body cameras were consequential after Windermere officer Robert German, who was wearing a camera, was shot to death in the line of duty last year while stopping some teenagers on the street. “We had within hours a public records request for Robbie’s body camera,” Treadwell says.

It turned out the officer had not turned on the body camera, or may never have had the chance.

Still, departments like the one in Windermere will have to weigh media requests for recordings. Treadwell says the department must balance the public interest against the need to keep information related to a criminal investigation confidential and to be careful about releasing images of people’s faces, crime victims, children and callers alleging domestic violence.

Windermere created its policies using guidelines from a report released last year, Implementing a Body-Worn Camera Program: Recommendations and Lessons Learned (PDF). It was created by the Police Executive Research Forum, with support from the U.S. Department of Justice’s Office of Community-Oriented Policing Services.

The report recommends that officers be required to activate their body-worn cameras when responding to all calls for service and during all law enforcement-related encounters and activities that occur while the officer is on duty.

It also recommends that officers be required to inform people when they are being recorded unless doing so would be unsafe, impractical or impossible. They should be required to obtain consent before recording interviews with crime victims.

In addition, officers should have the discretion to keep their cameras turned off during conversations with crime witnesses and members of the community who wish to report or discuss criminal activity in their neighborhood.

It’s also critical that departments establish the length of time that recorded data must be retained—for both evidentiary and non-evidentiary data.

Chuck Wexler, executive director of the D.C.-based Police Executive Research Forum, urged caution in his preface to the report.

“If police departments deploy body-worn cameras without well-designed policies, practices and training of officers to back up the initiative,” he wrote, “departments will inevitably find themselves caught in … public battles that will undermine public trust in the police rather than increasing community support for the police.”

This article originally appeared in the June 2015 issue of the ABA Journal with this headline: “Candid Cameras: After Ferguson and North Charleston, more police are learning to deal with wearing body cams.”