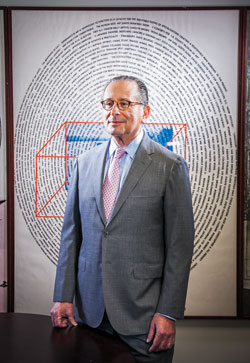 In most industries, research and development departments are so common and vital that when they’re referred to by their initials, no one needs any clarification. But R&D goes beyond a bunch of people in white lab coats inventing the newest portable smart device. R&D can also serve as a think tank where people aim to create new knowledge about science or technology in the hope of creating new products.

Perhaps it’s no surprise that R&D divisions have not made much headway in the legal industry, and specifically law firms. But one firm is looking to change that. In April, Akerman announced that it was creating an R&D council to identify and develop new ideas that will improve the way the firm delivers its services to clients. The council consists of both firm professionals and selected clients.

“This effort will help us better anticipate and react to the rapid changes happening in the market,” says firm chairman and CEO Andrew Smulian, “while also serving as a catalyst for breakthrough thinking.”

“We’ve been looking at the disruption in our profession through several lenses,” Smulian says, “including other professions such as the media.” He says the firm then got involved with Law 2023, a yearlong initiative developed by pro bono strategy consultants Insight Labs that brought together law firms, legal consultants and technology companies to figure out ways law firms can innovate.

Law 2023 identified seven new characteristics a law firm should adopt by 2023 if it wishes to be successful. Creating an R&D department was one recommendation, along with using technology to bring down costs, being more transparent, and using data and design to predict clients’ needs.

“With our R&D council, we’re trying to home in on ways to work and collaborate with our clients and bring them into the process,” Smulian says. The firm looked mainly at other industries that are also undergoing massive changes, such as telecommunications, health care and news media.

“Where leading tech companies are trying to anticipate consumer needs and fulfilling them before they know there’s a need,” he says, “we’re trying to do this by working with clients to help them anticipate what’s around the corner.”

Another recommendation from Law 2023 was for firms to identify niche markets and hyperspecialties where they can establish themselves as market leaders. “We’re living in an age of hyperspecialization, and a large part of this effort will be devoted toward identifying those new areas,” says Smulian. “We’ll operate within our core strengths and get more micro within those areas.”

As for how much power the R&D council will have, Smulian says it will have “a fair degree of autonomy with which to make recommendations.” If the firm decides to implement those recommendations, it would do so by going through the traditional practice group structure.

Bringing in clients to collaborate closely with the law firm isn’t new. However, bringing clients in to consult on a firm’s internal matters and business model is rare.

“I think they’re a first-mover in that regard,” says Peter Zeughauser, a legal consultant and owner of Zeughauser Group. “I just don’t think that’s part of the culture or nature of the typical law firm/client relationship.”

Tom Clay, a law firm consultant with Altman Weil, concurs, saying he originally thought the council was a marketing gimmick.

“Akerman has huge, fertile ground here,” says Clay, who cites Altman Weil’s May survey of law firm leaders that identified corporate law departments and technology as the two primary drivers of change in the legal industry. “They could really distinguish themselves provided every initiative starts squarely with the client and not the firm.”

At least one other major law firm also has an R&D department. Seyfarth Shaw, however, uses its team to provide technological solutions. Managing partner Peter Miller says the idea originated 10 years ago as a means of providing better and more efficient service to clients.

“In 2005 and 2006, we were still in the middle of the heyday for most law firms,” Miller says. “However, we figured it was too good to last and realized we had to identify ways we could make more contributions to our clients and differentiate ourselves from our competitors.”

Seyfarth’s team, known internally as “legal solutions architects,” is responsible for automating workflows, eliminating unnecessary labor and even creating custom-ized software or technological systems to aid clients. For example, Miller says many of the firm’s clients have to deal with thousands of contracts that cover many different areas, including labor, transactional and nondisclosure agreements. “We’ve developed a program where contracts come in through a particular pipeline and get categorized and automatically routed to the right reviewer. Maybe that reviewer is us; maybe it’s another firm.”

Miller says his firm’s group, unlike Akerman’s, does not include clients. However, Miller stresses that clients are kept in the loop and consulted on everything. “We always go to our clients and talk to them whenever we’re looking at an idea or making a change,” he says. “We always ask whether it’s something that makes sense to them.”

Insight Labs is not a legal consulting company; its purpose is to bring together top minds in various industries to solve social problems. “We’re not affiliated with the legal industry,” says Insight Labs founder Jeff Leitner. “However, we are absolutely convinced that, in order to maintain a healthy rule of law, we must have a healthy legal industry that serves society as a whole. A legal industry that only serves a few people well is bad for all of us.”

Leitner says that, from the beginning, he laid down a ground rule that participants were not to talk about things like alternative billing that would merely reform the existing model.

“Our biggest contribution was that we declared early on that the future of the legal industry will not be determined by the U.S. legal industry,” Leitner says. “It’s the marketplace that demands different things, and the industry either adapts or dies.”

This article originally appeared in the September 2014 issue of the ABA Journal with this headline: “Legal R&D: Akerman takes time to find new ideas for client service.”