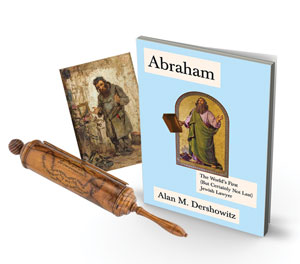 Acclaimed attorney and former Harvard law professor Alan Dershowitz is known for his celebrity clients, his strong opinions and his more than 30 books. His latest, "Abraham: The World's First (But Certainly Not Last) Jewish Lawyer," carries more than just a hokey name. It also underscores how intertwined his profession and his religion are.

That intersection also is evident in Dershowitz’s homes, where his impressive collection of rare Jewish art and artifacts is housed. Over the course of his work and life, the 77-year-old lawyer has acquired Judaica, including 18th century spice towers (used to mark the end of Shabbat), wine cups and seder plates (used at Passover) from across the globe.

“Like lots of other people who grew up poor, I started collecting comic books and baseball cards,” he says. As he grew older, he was drawn to the objects of his faith. After Dershowitz retired from Harvard, he and his wife sold their Cambridge, Massachusetts, home and consolidated into apartments in New York and Florida. And with the move, Dershowitz lost much of his display space for his collections. He and his wife have different tolerance levels for clutter, so Dershowitz began to deaccession many of his items, particularly the larger pieces and paintings.

In March, 28 items were made available as part of a 236-piece auction hosted by J. Greenstein & Co., a Long Island auction house specializing in Judaica.

Owner Jonathan Greenstein says the Dershowitz name brought in more bidders than usual. Among the sales were an important historic megillah, which includes the Book of Esther, crucial for the retelling of the story of Purim.

Those pieces sold were just a fraction of Dershowitz’s collection. He may sell others in the future, donate others to Holocaust organizations, and is keeping a few in his home office (a zone that is permitted to have clutter, he jokes). A few pieces are being passed down to his children or grandchildren.

“They are good kids; they will go to a flea market with me. But none of them have a passion for collecting. They each only want one or two or things.”

This article originally appeared in the August 2016 issue of the ABA Journal with this headline: “Lifelong Collector: Alan Dershowitz’s accumulation of Judaica reflects his passion for faith, collecting and clutter.”