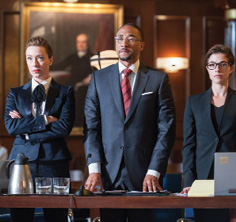 Is the modern-day courtroom stacked against the little guy? That’s the core question explored in Goliath, the new Amazon Prime show by Jonathan Shapiro and David E. Kelley. The streaming series takes “a very dark look at law in the 21st century,” Shapiro says, and reaches some dire conclusions.

Goliath is about corporate power, BigLaw and what it takes to take a stand against them. But it’s also about human fallibility, revenge and redemption. Billy Bob Thornton stars as a Billy McBride—once a powerful litigator, now a washed-up drunk. When McBride and a ragtag team take on a wrongful death suit against the biggest client of his old firm, they uncover a widespread conspiracy “pitting them all in a life or death trial against the ultimate Goliath,” Shapiro says.

“In the 21st century, large law firms have become enormous economic and technological behemoths,” he adds. “They can control outcomes in the civil sphere in a way that’s unprecedented. We wanted to do a show about that.”

Shapiro is co-creator, writer and executive producer on Goliath, which is his first foray into online television. But he’s had a long career in Hollywood with shows such as The Practice. Shapiro says the streaming series allowed the team a wider berth for big issues that would have gotten short shrift on network television: depression and substance abuse among lawyers, the litigation advantages of the rich and powerful, the demise of the jury trial, and the risk to civil liberties in a time of perpetual war.

It’s deep stuff, but Shapiro says he and Kelley wanted to dig in without causing sensory overload. “We’re not doing a lecture series, you don’t want to be didactic, it’s not continuing legal education,” Shapiro says. “Here you know everyone’s back story and you care deeply about what happens to these people as a result of this court case.”

As the flawed anti-hero, Thornton keeps scenes interesting, and the sharp cast is rounded out by stars, including William Hurt and Tony award winner Nina Arianda. Shapiro, a former federal prosecutor, Kirkland and Ellis alum, and lecturer at the University of Southern California’s Gould School of Law, says he was intrigued by the idea of following a single, complex civil case over the course of eight episodes.

“I write about law because it’s something I know a little bit about,” Shapiro says. “Law is the greatest place to get stories—all the best stories are in the law, in court.”

If people like the show, Goliath will be back for additional seasons. In the meantime, Shapiro is finishing a third book and working on another series.

“It’s taken me 16 years where if I fill out a form about what I do, I now write ‘writer,’ ” Shapiro says. “It took me that long to accept it. You’re always a lawyer. You don’t recover from that.”

This article originally appeared in the December 2016 issue of the ABA Journal with this headline: "Amazon and Goliath: New streaming series explores corporate power, BigLaw and human redemption."