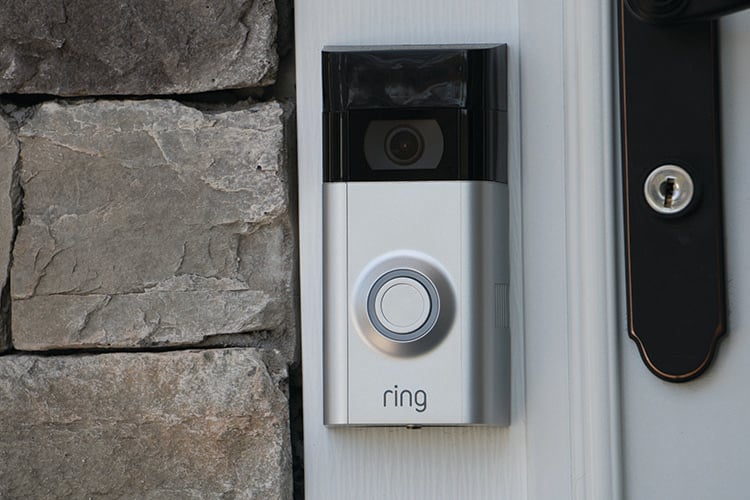 According to the New York Times, more than 90,000 packages a day are stolen or disappear without explanation in New York City alone, up about 20% from four years ago. Nationally, that number rises to 1.7 million per day, according to the Times piece.

Among the companies with a substantial interest in delivering packages is Amazon, which sends out billions of packages per year. As such, when Amazon acquired doorbell camera company Ring in 2018 for over $1 billion, it seemed like a logical move and a good addition for the company’s surveillance portfolio, which includes facial recognition software Amazon Rekognition.

In fact, soon after acquiring Ring, Amazon launched an app called Neighbors, which allows users to share video with neighbors and local police departments. Amazon would not share with the ABA Journal how many Ring cameras it has sold, nor the number of Neighbors apps that have been downloaded.

Critics warn Ring threatens to turn the U.S. into a surveillance state.

“It’s basically increasing surveillance in American life and doing so in a way that has the potential to become a centralized surveillance infrastructure,” says Jay Stanley, senior policy analyst for the Speech, Privacy and Technology Project of the American Civil Liberties Union, based in Washington, D.C. “Ring is pushing the cameras on people and cooperating with law enforcement in ways that raise concerns, making it an organized surveillance infrastructure rather than a bunch of individual cameras.”

In addition to concerns about the storage of data in the cloud, Stanley cites numerous articles and reports that Ring and Neighbors highlight “issues of racial profiling when individuals use cameras to raise suspicions about racial minorities.”

Amazon said through a spokesman: “Ring’s mission is to make neighborhoods safer. We work towards this mission in a number of ways, including allowing local police to share official, important crime and safety updates with their residents through the free Neighbors app. We’ve seen many positive examples of residents and local police engaging on the Neighbors app and believe open communication is an important step in building safer, stronger communities.”

Ring has faced several purported class action lawsuits in recent months. In December, an Alabama resident filed a complaint in the U.S. District Court for the Central District of California against Amazon accusing it of lax cybersecurity practices that left Ring cameras vulnerable to hackers. The complaint cited several reported incidents, including a December incident where a hacker used the device to harass an 8-year-old girl in Mississippi. According to media reports, Amazon stated that its network had not been compromised and posited that users may have used passwords on multiple platforms and devices. Then, in January and February, two more lawsuits were filed in the same court.

One of the law enforcement agencies that has partnered with Ring is the Chandler, Arizona, Police Department. Chandler is a fast-growing suburb of Phoenix with a population of 263,000.

Seth Tyler, a detective with the Chandler Police Department, says Ring systems can be valuable in tracking criminal activity, including “package thefts, vehicle burglaries and residential burglaries—to name a few.”

“Since a camera can be placed virtually anywhere from any location, the opportunities could apply to virtually any crime,” Tyler says. “We have numerous success stories involving vehicle burglaries and package thefts.”

According to Tyler, one such case involved a woman who accused her ex-boyfriend of stalking her. The Chandler Police Department gave her a Ring camera for free, and it helped lead to an arrest. “The benefit for the community is the ability to share any criminal or suspicious activity, which is captured on their device, to neighbors and the police department.”

While Stanley of the ACLU admits the number of package thefts is “incredible,” he also says Amazon should scale back on “marketing that causes people to be fearful, and stop working hand-in-glove with police departments.”

Asked if the presence of cameras doesn’t help to reduce temptation to commit crimes, Stanley agrees that it’s probably true, but adds “you could probably achieve that through other cameras that are not internet connected.”

The ACLU also favors “broad-based privacy laws to give people more control over any data that they share with companies in the cloud,” he adds.

This article was originally published in the April/May 2020 issue under the headline, “Standing Sentry: Amazon’s Ring doorbell cameras may help deter package thefts and other crimes, but critics worry about overreach.”