Activists try to gain legal personhood for animals and ecosystems 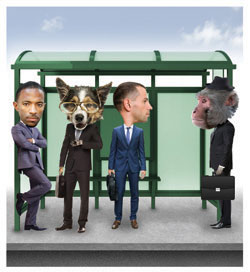 Researchers and animal behavioral specialists have long known that many of our nonhuman friends are capable of astonishing demonstrations of comprehension, problem-solving and—according to some—even empathy. But once they’ve served their purpose, animals are often left to live out their lives in cages or are euthanized.

The legal status of most animals is such that they are considered to be mere property, like a briefcase or a cellphone. They can be captured, caged, displayed, dissected or fricasseed, for that matter.

Many would argue that’s just the way the food chain works. But others refuse to see it that way. They say that certain species—such as great apes, dolphins and elephants—have a highly sophisticated level of cognition, and therefore deserve legal protection to keep them from being locked up for our profit, amusement or any other reason. Toward that end, some interesting legal strategies are beginning to evolve.

In early December the Nonhuman Rights Project, a Coral Springs, Fla.-based animal rights group, filed a lawsuit in Fulton County Court in New York. The suit asserts that, according to scientific evidence, chimpanzees have complex cognitive abilities—such as being able to recognize themselves in a mirror—and have a “concept of their personal past and future.”

The lawsuit focuses on a chimp named Tommy and seeks to bestow upon him “legal personhood” to prevent him from being kept in a “small, dank cement cage in a cavernous, dark shed” at a used-trailer lot in Gloversville, N.Y. Tommy’s owners have been quoted as saying that he is well cared for while they seek space for him at a sanctuary.

But this effort could become a slippery slope indeed. Where would the legal-personhood line be drawn? Just the cute ones? Just the “smart” ones? Just the ones we keep as pets? If chimps, why not dolphins? If elephants, why not goldfish? (Actually, if goldfish were “persons,” many of us would be much more diligent about changing the water.)

So while the personhood-for-animals movement tries to gain a toehold (or paw-, claw- or finhold), another legal strategy is taking shape that seeks to bestow rights upon not only animals but plant life as well—in other words, entire ecosystems.

One of the more recent examples is provided by the Boulder County, Colo., planning commission, where an effort is underway to include language in the comprehensive plan that would state: “Boulder County acknowledges the rights of all naturally occurring ecosystems and their native species populations to exist and flourish.”

Language of this type has been used in other jurisdictions with the apparent objective being the prevention of non-eco-friendly activities such as mining, fracking and waste disposal. Just make every earthworm, every blade of grass and every bird in the sky a legal person and therefore, ipso facto, untouchable.

Declaring every animate object a legal person might make us feel all warm and tingly, but the reality is that the legal obstacles could be insurmountable. Too bad, though. Tommy deserves a chance to swing like an ape.

This article originally appeared in the February 2014 issue of the ABA Journal with this headline: “Instant Evolution: Some espouse fauna/flora fast track to personhood as means of legal protection.”