As more courts use facility dogs, some defense lawyers object 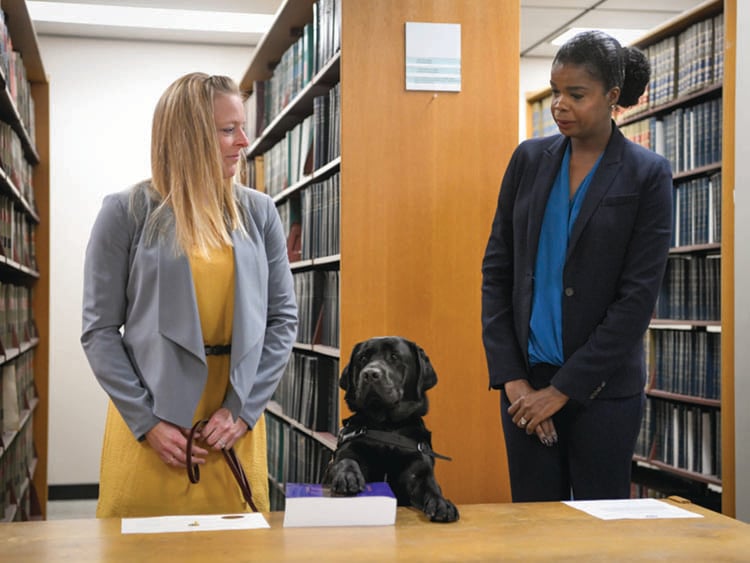 Prosecutor Jillian Anselmo is animated as she explains why Hatty, the black Labrador retriever at her side, does not prejudice the defense when she comforts child witnesses while they are testifying in court.

“This isn’t a dog-and-pony show—no pun intended,” says Anselmo, a fast-talking attorney in the Cook County State’s Attorney Office’s Sexual Assault and Domestic Violence Division. “What she does is allow kids to get up there and tell the truth.”

Perched on the edge of a sofa in a bright interview room on the 14th floor of a criminal court on Chicago’s West Side, Anselmo gesticulates with her hands as she makes Hatty’s case. In contrast, Hatty, dressed in a blue vest, is sleepy, resting her head against the hip of her handler and victim-witness specialist, Stephanie Coelho. Hatty is trained to lie still unless Coelho tells her not to. Nearby is a purple beanbag that Hatty sometimes curls up on with kids as they prepare for trial.

In a justice system that can sometimes appear hostile, facility dogs like Hatty can comfort child witnesses as they talk about the most traumatic experiences of their lives. Because the dogs lie at children’s feet in the witness box, jurors may never see them. But according to some defense lawyers, when judges say witnesses will be assisted by canines, that makes them appear more sympathetic or believable, violating the due process rights of their clients.

At least 15 states over the last five years have passed laws allowing facility dogs for vulnerable witnesses, according to the American Bar Association. Some laws limit their use to child witnesses in cases involving abuse or violence; others include adults. The dogs can also accompany children in civil family court hearings. Other states leave it up to judges to decide whether to use the canines. In Congress, a pending bill called the Courtroom Dogs Act would allow them in criminal cases in federal courts.

Judges have tackled the issue of prejudice on appeal, most recently in the case, Commonwealth of Pennsylvania v. Purnell. The commonwealth’s supreme court ruled in September that a trial court did not abuse its discretion by allowing a facility dog for an autistic witness in the murder trial of Sheron Jalen Purnell.

Criminal defense attorney Cynthia Orr says the courtroom is no place for the animals. An avowed dog lover, the former chair of the ABA’s Criminal Justice Section and past president of the National Association of Criminal Defense Lawyers argues the canines could disrupt proceedings and deny defendants a fair trial. “The fact that the animals are there says this person needs some assistance because they’ve somehow been traumatized or are being traumatized. It puts a thumb on the scales of justice,” Orr says.

Hatty, short for “Hat Trick,” was part of a litter of puppies with hockey-inspired names, according to a November 2019 Insider article, that included Silky, Celly, Dangle and Puck. She came from Duo Dogs, a St. Louis-based group that breeds and trains facility dogs. Christina Smith has been training dogs at Duo for eight years. Smith calls facility dogs like Hatty “bombproof” because they stay calm in the face of loud noises, big crowds and strong emotions.

“You don’t want a dog that likes to lick a lot or paws or jumps,” Smith says. “They’re low-key dogs, but they have just enough personality to engage the child.”

Hatty is among approximately 265 facility dogs working across 41 states, according to the Courthouse Dogs Foundation, which advocates for their use. Research has shown that the animals help child witnesses overcome their fears in forensic interviews. Hatty is trained to lie quietly in the witness box and out of sight, although Anselmo says jurors might catch sight of her. Witnesses can rest their feet on her back. Coelho says during a tough line of questioning in a recent trial, a child witness stayed calm by looking down at the dog.

Ellen O’Neill-Stephens, founder of the Courthouse Dogs Foundation, was a prosecuting attorney in Seattle for 26 years. In 2003, she brought her son’s golden Labrador retriever, Jeeter, to comfort young offenders in a King County juvenile drug court. She discovered a courthouse dog had comforted child witnesses in Mississippi as early as the mid-1990s. O’Neill-Stephens then persuaded the prosecutor’s offices in King and Snohomish counties to use dogs to assist child victims when they testify.

O’Neill-Stephens has made it her life’s work to bring the dogs into the legal system ever since. She argues courts should allow facility dogs for both prosecution and defense witnesses. They enhance the fact-finding process, she says, and make the justice system more humane for vulnerable witnesses.

“I was snotty to defense witnesses. I watched Perry Mason. I thought that’s the way you did it,” O’Neill-Stephens recalls. “We need to get away from that. We can’t do that to people.”

While she is sympathetic to the pressures witnesses face on the stand, Orr disagrees with O’Neill-Stephens’ belief that courtrooms should be nonadversarial.

“The trial of the accused is not a place where we’re seeking to comfort victims. We’re trying to test them there,” Orr says. “We test the proof of the evidence against the accused, and buffering that in any way is inappropriate.”

In April, Maria T. Heller, a public defender in Pennsylvania’s Chester County, made the case against the dogs in Purnell. During oral arguments, Heller agreed that while the dogs are not inherently prejudicial, she was troubled by the use of the term “comfort dogs” to describe them.

“This is particularly a problem for the defense,” Heller told the panel of judges during a remote hearing. “I think that when you use the word ‘comfort’ dog, it implies that the witness needs to be comforted, indicating that there was some trauma and that this is true.” 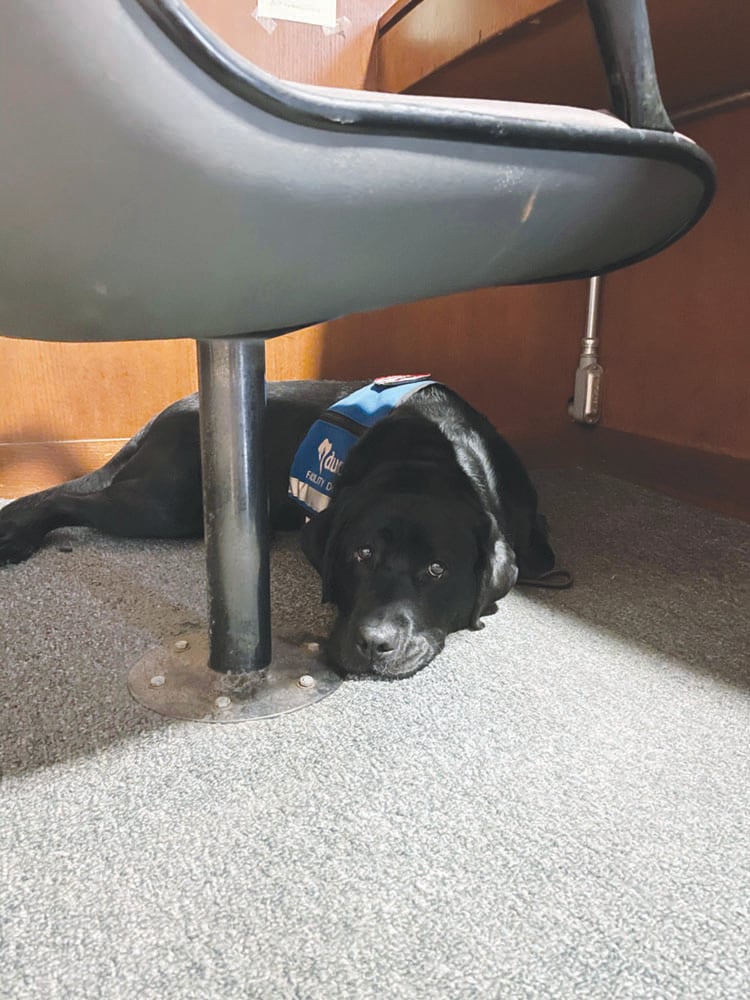 Hatty where she works, providing comfort to vulnerable witnesses when they testify. Photo courtesy of the Cook County State’s Attorney’s Office

Do dogs like Hatty actually prejudice the defense? Psychology professors Dawn McQuiston and Kayla Burd tried to find out in a Georgia State University study published in 2019 in the journal Criminal Justice Review. For their research, McQuiston and Burd gave mock jurors a trial transcript and images of child witnesses with facility dogs.

In two experiments, the jurors were not influenced when a child witness testified with a facility dog. In one of those experiments, however, when shown a child witness clutching a teddy bear, they were more likely to convict. McQuiston cautions that the research is in its infancy, and the study was limited. She says she would like to do another experiment using video to better replicate the courtroom experience.

“At least so far, I think the signs are good that defense attorneys don’t need to worry, and there is a great benefit to kids and other vulnerable witnesses,” McQuiston adds.

At the ABA Midyear Meeting in February, the House of Delegates passed a resolution encouraging courts to use facility dogs. A resolution report recommends courts allay due process concerns by questioning jurors during voir dire to find out if a facility dog would sway their decision. It recommends dogs should enter the courtroom when the jury is not present. Judges should instruct jurors not to “draw any conclusions” when a witness appears with a dog, the report states.

In Purnell, the Pennsylvania Supreme Court adopted a standard balancing the degree to which a facility dog will help a witness testify, against potential prejudice to a defendant. Among other things, the ruling found that to minimize the chances of prejudice, courts should limit jurors’ view of the dog.

In 2020, a superior court panel rejected Purnell’s claim that he was prejudiced. It said appeals courts in several states—Arizona, California, New York, Texas and Washington—had ruled that judges have the power and discretion to allow facility dogs.

Suspension of in-person hearings during the coronavirus pandemic curbed Hatty’s impact, but Coelho says she has appeared in court several times, including in two jury trials.

Coelho and Anselmo note that when Hatty is in her vest, she is all business. No one should touch her but Coelho or the child witnesses. She’s not to be distracted. She has a job to do.

When she’s not on the clock, however, Hatty is like any other dog. Later, outside the courthouse, Coelho removes the dog’s vest. Anselmo tosses her a squeaky tennis ball. Hatty bounces on her front and hind legs. She grabs the ball and drops it back at Anselmo’s feet.

“It’s literally Clark Kent and Superman,” Anselmo says. “Rip off that suit, ready to go. With the suit and the glasses back on, back to work.”

This story was updated to reflect the Pennsylvania Supreme Court’s Sept. 22, 2021 ruling inCommonwealth of Pennsylvania v. Purnell. The court’s decision was still pending at press time.

This story was originally published in the October/November 2021 issue of the ABA Journal under the headline: “Canines in Court.”