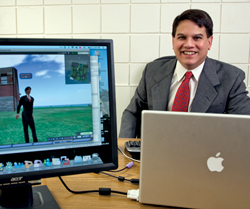 Even in the virtual world, lawyers enjoy the camaraderie of meetings.

That penchant for getting together at least partly explains why some lawyers who participate in Second Life—an Internet site that allows people to socialize through virtual proxies—have formed their own legal organization.

In some ways, the 100 or so members of the SL Bar Association might find it easier to get together in the virtual world of Second Life than lawyers in real life (or what virtual aficionados like to call the “physical world”). They don’t have to free up time from the office or worry about flying (ugh) to another city.

In the virtual world of MMORPGs (pronounced morpegs), or “massively multiplayer online role-playing games,” flying is much easier. With one click on a computer keyboard, you can send your avatar—a computerized alter ego—to the site where the SL Bar Association is meeting. Avatars can be anything from a reasonably close likeness to something more fanciful, like, say, a flying elephant; but through these, individuals interact with each other in real time, using both voice and text messages.

More than 3 million people already take part in Second Life, while some 7 million have played the similarly structured World of Warcraft.

But while World of Warcraft is a gamelike environment in which players try to reach specific goals, sites like Second Life mimic life in the physical world. There are construction projects, businesses, shopping arcades, artistic endeavors and social outlets. Throughout Second Life and other similar virtual worlds, the emphasis is on interaction with fellow participants.

Second Life even has its own currency: “Linden dollars” or “Lindens”—named for Linden Lab in San Francisco, which created the site. Lindens, which can be bought and sold on the Linden Dollar Exchange controlled by Linden Lab, are used to purchase virtual goods and services in Second Life. Lindens even can be exchanged for real dollars to buy the accoutrements of the good life in the virtual world. This bustling cross­over economy hasn’t escaped the notice of entrepreneurs, who also are entering virtual worlds in growing numbers.

The SL Bar Association “is the most prominent lawyers’ group on Second Life, and we have CLE programs for credit,” says Stephen S. Wu, the newly elected “president” of the organization. “We meet via computer monthly and we have a process to get people credentialed so they’re real lawyers, and we talk about legal issues in Second Life. We are concerned about the unauthorized practice of law. We only permit people to hold themselves out if they’re real attorneys.”

That is important, Wu says, because lawyers increasingly are being asked for advice on “in world” legal issues—in the virtual world, that is. But as lawyers, they can’t leave the real world com­­pletely behind.

“At some point, these virtual communities will need a dispute resolution mechanism,” says Wu. “I’m guessing there will be a range of online ADR and quasi-court systems. In the future, there may be an extension of the real-world legal system, and govern­ments may have court systems set up in virtual worlds.”

In the physical world, Wu is a partner at Cooke Kobrick & Wu in Los Altos, part of northern California’s Silicon Valley. He also is the new vice-chair of the ABA Section of Science and Technology Law.

Largely through Wu’s efforts, the science and Tech­nology Law Section is at the forefront of the ABA’s efforts to help lawyers learn about the fast-developing legal niche called virtual law.

Benjamin Duranske, a lawyer in Boise, Idaho, edits a website that tracks virtual law issues. His book, Virtual Law: Navigating the Legal Landscape of Virtual Worlds, was released earlier this year by ABA Publishing. The book, sponsored by the Science and Technology Law Section, explains how virtual worlds work and how traditional legal concepts of contracts, torts, intellectual property, real estate and even criminal law apply in virtual environments. It’s often with a twist, he notes.

“While some issues in virtual law will be resolved by reference to existing legislation and case law, there are a lot of completely new issues in play,” Duranske says.

Copyright infringement, for instance, already is rampant in the virtual world, says Duranske. “There are hundreds of stores selling Nikes in Second Life,” he says. “These are shoes for avatars, but what does that mean? Are we talking about just a picture of shoes, or should it be considered something else, like a pair of virtual shoes?”

Until a few years ago, says Duranske, “nobody had even heard the term virtual property. Now we’re all trying to figure out what it means. Also, bad legislation regarding the 3-D Internet [another name for virtual worlds] is pretty likely unless groups like the ABA pay some attention as it becomes more popular. Now is a fan­tastic time for practitioners to get involved. While there’s lots of interest from academia already, there are very few practicing attorneys focusing on this space right now.”

The Science and Technology Law Section has created a vehicle for lawyers interested in delving deeper into the virtual world. Duranske is one of the co-chairs of the section’s Virtual Worlds and Multi-User Online Games Committee.

In its early efforts, the committee has been particularly active on the CLE front. In June, Duranske moderated a program titled “Why Virtual Worlds Matter for Lawyers.” It was, he says, the first-ever CLE program offered both in the real world as a teleconference and in the virtual world, where the presenters even appeared as avatars. The program was co-sponsored by the Sci­ence and Technology Law Section and the Section of Intellectual Property Law, in conjunction with the ABA Center for Continuing Legal Education.

In August, the Science and Technology Law Section presented two more CLE programs on virtual law issues at the ABA Annual Meeting in New York City. One of them was co-sponsored by the Intellectual Property Law Section and the other by the General Practice, Solo and Small Firm Division.

At one of the programs in new york, leonard t. Nuara warned that lawyers must take ethics rules into account when they enter the virtual world. While there is growing debate over how lawyers should be governed by professional conduct rules when they are participating in MMORPGs, Nuara said, “Ethics rules apply to a lawyer no matter when or where he or she gives advice, and that needs to be recognized.”

Confidentiality also should be a concern for lawyers navigating through Second Life and other virtual worlds, according to Nuara, who chairs the technology and intellectual property practice group at Thacher Proffitt & Wood in Summit, N.J.

The nature of the virtual world also makes it hard for lawyers to identify potential conflicts between various clients. “Do you know who you are actually speaking to?” he says. “If they represent them­selves as person X and they’re not, who’s really your client? And how are you going to run a conflicts check if you don’t know who they are?”

In the view of Diane L. Karpman, the ethics issues raised by virtual worlds are a continuation of questions that have troubled lawyers since the Internet came into existence. One of those concerns is the measure of anonymity that participants in virtual worlds can enjoy.

For Karpman, a principal at Karpman and Associates in Los Angeles and a member of the ABA Standing Com­mittee on Professionalism, the virtual world creates another question about how ethics rules should be applied in the context of the Internet.

“I’m reminded of a New Yorker cartoon where two dogs are surfing the Internet, and one says, “Don’t worry. They don’t know you’re a dog,” says Karpman. “We’re attempting to reconcile 19th century concepts with the speed of the Internet. The virtual world is another extension of this problem.”