Withdrawing from Controversial Case Was Awkward for King & Spalding, But That’s About All 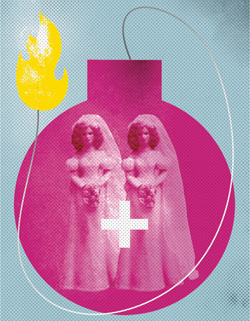 Atlanta-based King & Spalding may have doused a white-hot fire when it changed its mind about defending a statute that denies federal benefits to married same-sex couples.

By dumping the case, the 126-year-old firm may have soothed withering criticism from gay rights organizations, and perhaps among some of its own members. The firm’s sudden withdrawal on April 25 also may have stanched some potential client defections, as gay rights advocates fanned the flames with press announcements, letters and emails.

But then other clients began to question King & Spalding’s commitment to them. Within days of the firm’s withdrawal from the litigation, Virginia Attorney General Kenneth T. Cuccinelli II and the National Rifle Association fired the firm.

“We seek to do business exclusively with law firms that do more than merely aim to perform the bottom-of-the-barrel ethical obligations and do just enough on behalf of their clients to avoid trouble for themselves,” Cuccinelli told the firm in an April 27 letter. “We seek law firms that will actively protect our interests, even when that may be uncomfortable for [the] firms.”

A committee of the House of Representatives hired Paul D. Clement, a partner in the firm’s Washington, D.C., office to defend the law after the Obama administration quit the cases, stating its belief that they are indefensible because DOMA is unconstitutional. But in the face of growing protests, King & Spalding backed out. Clement, a solicitor general for President George W. Bush, promptly walked and took up the litigation with a new firm.

“I resign out of the firmly held belief that a representation should not be abandoned because the client’s legal position is extremely unpopular in certain quarters,” Clement wrote in a letter to the firm. “Defending unpopular positions is what lawyers do.”

King & Spalding had no ethical duty to take the case, nor did it leave a client in the lurch by quitting. The judge signed off on a stipulation that Clement would remain at the defense table with his new firm so the House committee wouldn’t go unrepresented.

Still, Cuccinelli wondered how King & Spalding could defend terrorist suspects imprisoned at Guantanamo for free yet show “a willingness to abandon the client” in the DOMA case. Virginia has been criticized for enacting a state statute—defended by Cuccinelli—that purports to pre-empt federal health care legislation.

More of the same came from the NRA, which Clement represented before the U.S. Supreme Court last year when the justices applied Second Amendment gun ownership rights to the states as well as the federal government.

“It goes without saying that in situations in which we retain outside counsel, we expect them to zealously advocate for our interests and not abandon the representation due to pressure from those who may disagree with us,” the organization told King & Spalding.

“In reviewing the assignment further, I determined that the process used for vetting this engagement was inadequate,” Hays said. “Ultimately, I am responsible for any mistakes that occurred and apologize for the challenges this may have created.”

Meanwhile, gay rights advocates scooped up credit for driving Clement away and praised King & Spalding. Some speculated that remaining with the case would have at least knocked a little of the polish off the firm’s long-held commitment to gay rights and could have hamstrung efforts to recruit gay members.

King & Spalding makes no secret of its support for gay rights, inside and outside the 800-lawyer firm. “King & Spalding is committed to having the brightest and most diverse lawyers it can find, including members of the lesbian, gay, bisexual and transgender community,” the firm states on its website.

A King & Spalding associate serves as president of the Stonewall Bar Association of Georgia, a professional organization focused on gay issues, while a partner sits on Stonewall’s board. The firm actively recruits gay and lesbian law students, and its representatives regularly attend Lavender Law, an annual conference and career fair sponsored by the National LGBT Bar Association. Since 2008, the Human Rights Campaign has given King & Spalding a score of 95 out of a possible 100 on its Corporate Equality Index, which evaluates how large employers treat gays.

To be sure, however, neither Clement nor the firm had a professional obligation to consider those activities or firm employees’ views in deciding to take on the DOMA defense. And it’s unlikely Clement could have taken the case without the knowledge and approval of firm management.

“I would have never undertaken this matter unless I believed I had the full backing of the firm,” states Clement in his resignation letter.

“I’m sure he didn’t do it in a vacuum,” says Stephen Gillers, a professor at New York University School of Law who teaches ethics. “No lawyer can bring in a case on his own.”

Neither Clement nor King & Spalding mentioned provisions in the firm’s contract with the House that forbid King & Spalding employees—including those not on the case—from working to alter or amend DOMA. The contract also requires the firm to prevent those activities.

Though many sets of eyes besides Clement’s probably looked at the DOMA matter, none likely would have considered opposition to taking the case from within the firm’s own ranks. While lawyers routinely must run checks to ensure one client’s interest doesn’t conflict with another’s, a comparable internal procedure could effectively paralyze a firm’s business if it were required to weigh objections from the inside, Gillers says. After all, plenty of firms take cases that aren’t exactly smash hits with their staffs. But King & Spalding apparently learned that sometimes internal considerations matter, as its LGBT ranks made clear.

Today Clement has a new office at the Bancroft law firm in Washington, D.C., an eight-lawyer firm founded by Viet D. Dinh, a key member of the Justice Department under Bush.

The controversy began in February when the Justice Department withdrew as defense counsel in two cases under way in the New York City-based 2nd U.S. Circuit Court of Appeals. In a memo explaining the decision, Attorney General Eric Holder said DOMA violated equal protection under the Fifth Amendment and must be judged under higher scrutiny than courts have applied to it in the past. That scrutiny would include proof of historic discrimination and the existence of shared unchanging characteristics among the plaintiffs.

By sticking with his client, Clement may find himself making some tricky arguments. Observers wonder, for example, whether the defense would deny the existence of historic discrimination, or attempt to rebut the shared-characteristics requirement with arguments that homosexuality—unlike race—is not necessarily inherent in a person’s makeup.

Or Clement could attempt to ignore the heightened scrutiny the plaintiffs seek and fall back on the test of rational basis, the lowest level of scrutiny, where courts almost routinely defer to Congress and decline to second-guess its decisions.

The House report on the legislation justified it in part as “defending and nurturing the institution of traditional heterosexual marriage,” and advancing “the government’s interest in defending traditional notions of morality.” In a Massachusetts case decided last year, however, the administration asserted its own reasons for upholding DOMA, arguing that the Constitution allows Congress to preserve the status quo and buy time before embarking on a national policy while the states sort out the issue of same-sex marriage on their own.

But a district court judge in Boston was so unimpressed that he ruled in July 2010 that DOMA violated Fifth Amendment equal protection without resorting to the tougher test Holder would later urge. DOMA, he determined, couldn’t even survive rational-basis analysis. “Indeed, Congress undertook this classification for the one purpose that lies entirely outside of legislative bounds, to disadvantage a group of which it disapproves,” Judge Joseph L. Tauro wrote in Gill v. Office of Personnel Management. “And such a classification, the Constitution clearly will not permit.”