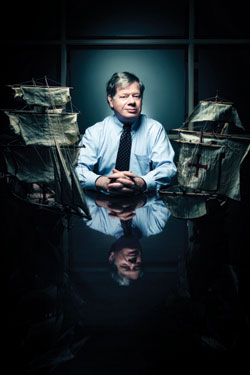 James Goold works against treasure hunters and their lawyers, who “all think they’ll get gold coins to hang around their necks.” Photo by Ryan Gibson.

Antique coins, guns, anchors and various other historical finds from sunken ships dating from the days of ancient Greece to the Napoleonic Wars—these are the artifacts attorney James Goold has spent much of his career defending.

“I’m the opposite of a looter,” says Goold, whose interest in cultural preservation disputes predates his law degree.

As an archaeology student in the 1970s, Goold worked on underwater sites in Italy and Greece, feeding passions for deep-sea diving and history. Shortly after becoming a lawyer he took on pro bono work for the nonprofit Institute of Nautical Archaeology, working to end looting of a Spanish ship that sank off the Turks and Caicos Islands around the time of Christopher Columbus.

Goold was hooked, and he went on to build a track record as a go-to guy for countries seeking redress from undersea fortune hunters. For more than 35 years he has worked on behalf of Great Britain, Italy, Spain and other governments in cases establishing rights to official property lost in foreign waters. He says the work is motivated in part by preservation of findings that enrich public knowledge.

“I’m always representing the owner—the national government or the cultural authorities—to preserve these [objects] and not to break them up for sale unless the government decides to as a matter of policy,” says Goold, who is of counsel with Covington & Burling in Washington, D.C.

“In many of these cases, I’m against the treasure hunters and their lawyers who are working on contingency,” he says. “They all think they’ll get gold coins to hang around their necks.”

The disputes are often complicated. Consider the treasure from the Nuestra Señora de las Mercedes, a Spanish frigate sunk by British navy ships off the coast of Portugal near the Strait of Gibraltar in 1804. The case, Odyssey Marine Exploration Inc. v. Kingdom of Spain, involved five years of legal proceedings and reviewing thousands of historical records, artifacts and photographs of the underwater site.

“There are certain amounts of people who view what lies beneath the sea as the Wild West,” says James Delgado, a past president of the Institute of Nautical Archaeology who worked as an archaeologist on the case. He describes Goold as “a lawyer who understands the importance of the rule of law—making sure things are done right, following protocols.”

The Mercedes dispute dates to 2007, when the treasure-hunting group Odyssey Marine hauled some $500 million worth of gold and silver bullion and other objects recovered from a wreck off Gibraltar to its base in Florida, laying claim to the cargo in a U.S. court. Represented by Goold, Spain sought to refute Odyssey’s assertion that there wasn’t enough evidence to prove the sunken ship was the Mercedes.

It’s “just absolutely astonishing … the lengths people will go to to claim they didn’t appreciate what they were doing,” says Goold, arguing that evidence of the ship’s identity was overwhelming.

In 2009 Goold won a U.S. District Court decision in Tampa on behalf of Spain; in 2011 the 11th U.S. Circuit Court of Appeals at Atlanta agreed with the lower court, ruling that Odyssey must return 17 tons of recovered treasure to Spain. Last year the U.S. Supreme Court declined to hear an emergency application for a stay. Instead, the artifacts are headed to Spanish museums.

This March, Spain awarded Goold the Commander’s Cross of the Order of Merit for the Mercedes case; he was knighted in 1999 for his earlier defense of Spanish patrimony, including Spain’s rights to two other sunken warships—the La Galga and the Juno, which sank in 1750 and 1802, respectively, off the Virginia coast.

“For us, these artifacts are part of our culture, part of our history,” says Rear Adm. Javier Romero, defense attaché to the Spanish Embassy in D.C. and Spain’s point man on these cases. “It’s about our past.”

Goold, who also specializes in domestic and international litigation, arbitration and regulatory matters, still spends much of his spare time on marine expeditions. He also serves on the boards of the Institute of Nautical Archaeology and RPM Nautical Foundation, an organization that researches maritime sites in the Mediterranean.